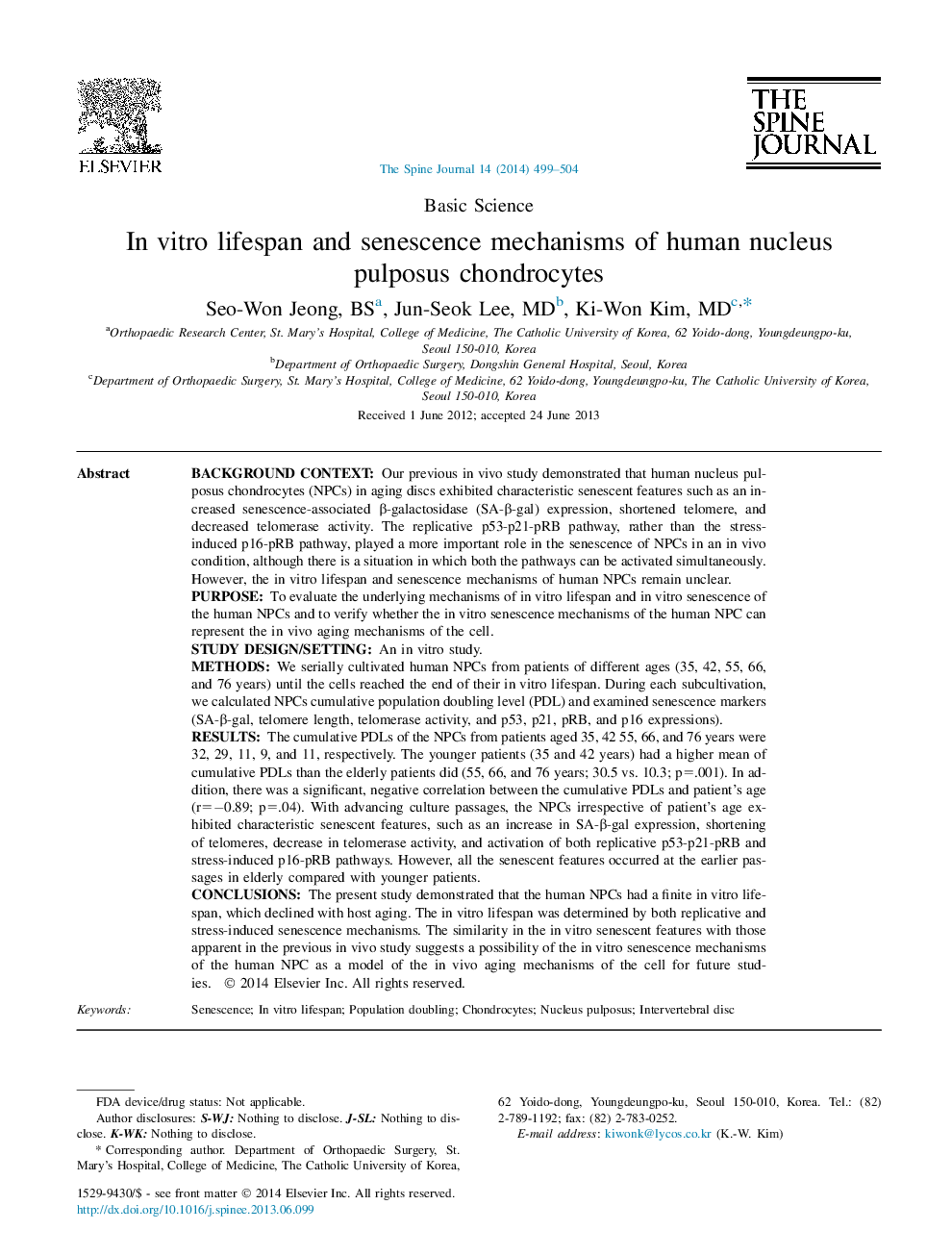 Background contextOur previous in vivo study demonstrated that human nucleus pulposus chondrocytes (NPCs) in aging discs exhibited characteristic senescent features such as an increased senescence-associated β-galactosidase (SA-β-gal) expression, shortened telomere, and decreased telomerase activity. The replicative p53-p21-pRB pathway, rather than the stress-induced p16-pRB pathway, played a more important role in the senescence of NPCs in an in vivo condition, although there is a situation in which both the pathways can be activated simultaneously. However, the in vitro lifespan and senescence mechanisms of human NPCs remain unclear.PurposeTo evaluate the underlying mechanisms of in vitro lifespan and in vitro senescence of the human NPCs and to verify whether the in vitro senescence mechanisms of the human NPC can represent the in vivo aging mechanisms of the cell.Study design/settingAn in vitro study.MethodsWe serially cultivated human NPCs from patients of different ages (35, 42, 55, 66, and 76 years) until the cells reached the end of their in vitro lifespan. During each subcultivation, we calculated NPCs cumulative population doubling level (PDL) and examined senescence markers (SA-β-gal, telomere length, telomerase activity, and p53, p21, pRB, and p16 expressions).ResultsThe cumulative PDLs of the NPCs from patients aged 35, 42 55, 66, and 76 years were 32, 29, 11, 9, and 11, respectively. The younger patients (35 and 42 years) had a higher mean of cumulative PDLs than the elderly patients did (55, 66, and 76 years; 30.5 vs. 10.3; p=.001). In addition, there was a significant, negative correlation between the cumulative PDLs and patient's age (r=−0.89; p=.04). With advancing culture passages, the NPCs irrespective of patient's age exhibited characteristic senescent features, such as an increase in SA-β-gal expression, shortening of telomeres, decrease in telomerase activity, and activation of both replicative p53-p21-pRB and stress-induced p16-pRB pathways. However, all the senescent features occurred at the earlier passages in elderly compared with younger patients.ConclusionsThe present study demonstrated that the human NPCs had a finite in vitro lifespan, which declined with host aging. The in vitro lifespan was determined by both replicative and stress-induced senescence mechanisms. The similarity in the in vitro senescent features with those apparent in the previous in vivo study suggests a possibility of the in vitro senescence mechanisms of the human NPC as a model of the in vivo aging mechanisms of the cell for future studies.