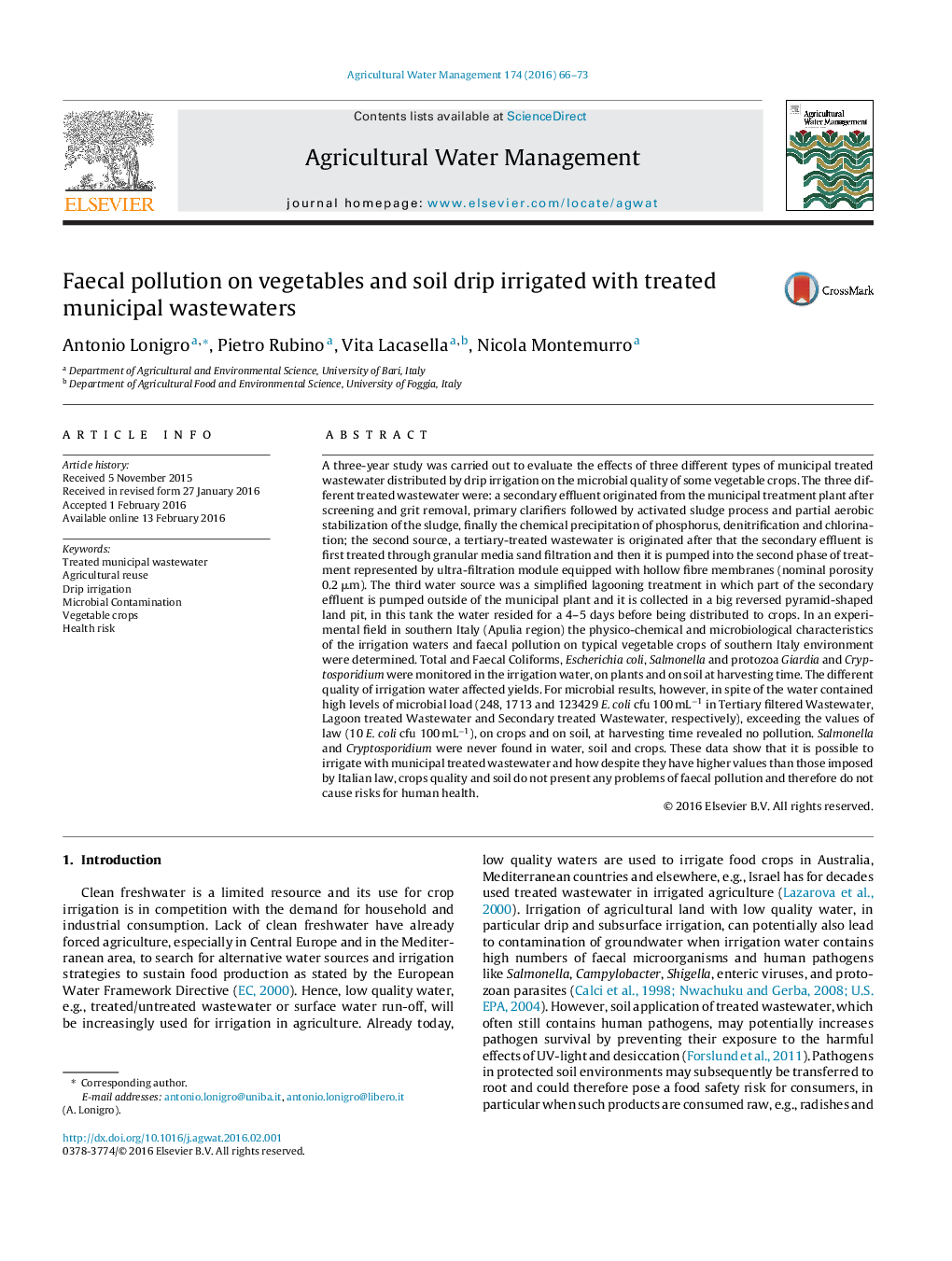 A three-year study was carried out to evaluate the effects of three different types of municipal treated wastewater distributed by drip irrigation on the microbial quality of some vegetable crops. The three different treated wastewater were: a secondary effluent originated from the municipal treatment plant after screening and grit removal, primary clarifiers followed by activated sludge process and partial aerobic stabilization of the sludge, finally the chemical precipitation of phosphorus, denitrification and chlorination; the second source, a tertiary-treated wastewater is originated after that the secondary effluent is first treated through granular media sand filtration and then it is pumped into the second phase of treatment represented by ultra-filtration module equipped with hollow fibre membranes (nominal porosity 0.2 μm). The third water source was a simplified lagooning treatment in which part of the secondary effluent is pumped outside of the municipal plant and it is collected in a big reversed pyramid-shaped land pit, in this tank the water resided for a 4–5 days before being distributed to crops. In an experimental field in southern Italy (Apulia region) the physico-chemical and microbiological characteristics of the irrigation waters and faecal pollution on typical vegetable crops of southern Italy environment were determined. Total and Faecal Coliforms, Escherichia coli, Salmonella and protozoa Giardia and Cryptosporidium were monitored in the irrigation water, on plants and on soil at harvesting time. The different quality of irrigation water affected yields. For microbial results, however, in spite of the water contained high levels of microbial load (248, 1713 and 123429 E. coli cfu 100 mL−1 in Tertiary filtered Wastewater, Lagoon treated Wastewater and Secondary treated Wastewater, respectively), exceeding the values of law (10 E. coli cfu 100 mL−1), on crops and on soil, at harvesting time revealed no pollution. Salmonella and Cryptosporidium were never found in water, soil and crops. These data show that it is possible to irrigate with municipal treated wastewater and how despite they have higher values than those imposed by Italian law, crops quality and soil do not present any problems of faecal pollution and therefore do not cause risks for human health.