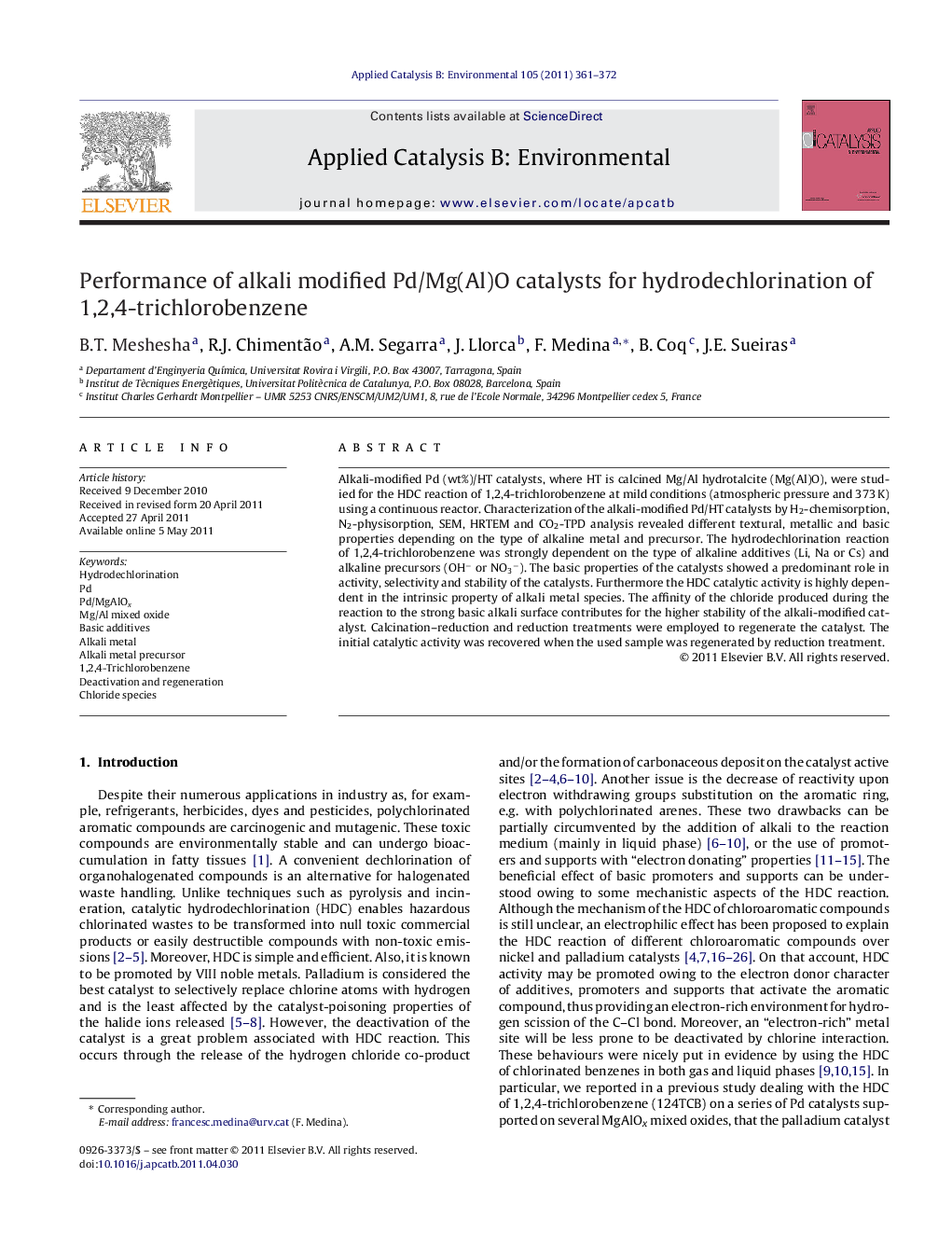 Alkali-modified Pd (wt%)/HT catalysts, where HT is calcined Mg/Al hydrotalcite (Mg(Al)O), were studied for the HDC reaction of 1,2,4-trichlorobenzene at mild conditions (atmospheric pressure and 373 K) using a continuous reactor. Characterization of the alkali-modified Pd/HT catalysts by H2-chemisorption, N2-physisorption, SEM, HRTEM and CO2-TPD analysis revealed different textural, metallic and basic properties depending on the type of alkaline metal and precursor. The hydrodechlorination reaction of 1,2,4-trichlorobenzene was strongly dependent on the type of alkaline additives (Li, Na or Cs) and alkaline precursors (OH− or NO3−). The basic properties of the catalysts showed a predominant role in activity, selectivity and stability of the catalysts. Furthermore the HDC catalytic activity is highly dependent in the intrinsic property of alkali metal species. The affinity of the chloride produced during the reaction to the strong basic alkali surface contributes for the higher stability of the alkali-modified catalyst. Calcination–reduction and reduction treatments were employed to regenerate the catalyst. The initial catalytic activity was recovered when the used sample was regenerated by reduction treatment.

TCB reaction rate expressed by TCB consumed (mmol min−1) per exposed Pd surface (m2) vs. number of basic sites (mmol of CO2 per g of the catalyst). The HDC activity is highly dependent in the intrinsic property of alkali metal species.Figure optionsDownload as PowerPoint slideHighlights
► Alkali-Pd/HT catalysts are very active for the HDC reaction of 1,2,4-trichlorobenzene.
► The basic property and metal area of the catalysts control the catalytic behaviour.
► Hydrodechlorination reaction was strongly dependent on the type of alkaline used.
► The catalysts can be regenerated by reduction treatments.