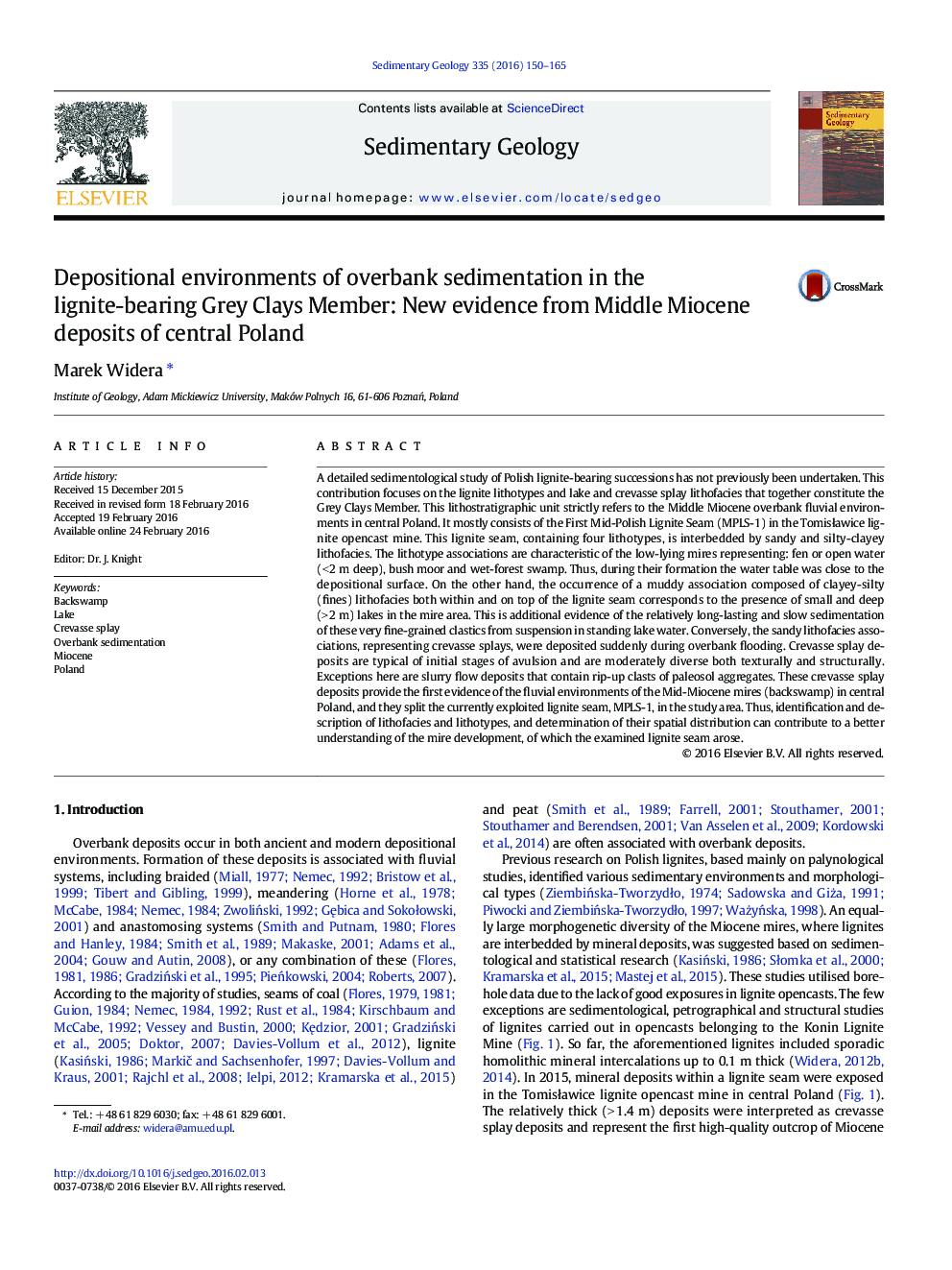 • This paper presents the first detailed sedimentological research of Polish lignites.
• The study focuses on the lignite lithotypes, lake and crevasse splay lithofacies.
• They belong to the Grey Clays Member of Middle Miocene age in central Poland.
• Both the lignites and associated clastics refer to overbank fluvial environments.
• The examined deposits are characteristic for the formation in the backswamp area.

A detailed sedimentological study of Polish lignite-bearing successions has not previously been undertaken. This contribution focuses on the lignite lithotypes and lake and crevasse splay lithofacies that together constitute the Grey Clays Member. This lithostratigraphic unit strictly refers to the Middle Miocene overbank fluvial environments in central Poland. It mostly consists of the First Mid-Polish Lignite Seam (MPLS-1) in the Tomisławice lignite opencast mine. This lignite seam, containing four lithotypes, is interbedded by sandy and silty-clayey lithofacies. The lithotype associations are characteristic of the low-lying mires representing: fen or open water (< 2 m deep), bush moor and wet-forest swamp. Thus, during their formation the water table was close to the depositional surface. On the other hand, the occurrence of a muddy association composed of clayey-silty (fines) lithofacies both within and on top of the lignite seam corresponds to the presence of small and deep (> 2 m) lakes in the mire area. This is additional evidence of the relatively long-lasting and slow sedimentation of these very fine-grained clastics from suspension in standing lake water. Conversely, the sandy lithofacies associations, representing crevasse splays, were deposited suddenly during overbank flooding. Crevasse splay deposits are typical of initial stages of avulsion and are moderately diverse both texturally and structurally. Exceptions here are slurry flow deposits that contain rip-up clasts of paleosol aggregates. These crevasse splay deposits provide the first evidence of the fluvial environments of the Mid-Miocene mires (backswamp) in central Poland, and they split the currently exploited lignite seam, MPLS-1, in the study area. Thus, identification and description of lithofacies and lithotypes, and determination of their spatial distribution can contribute to a better understanding of the mire development, of which the examined lignite seam arose.