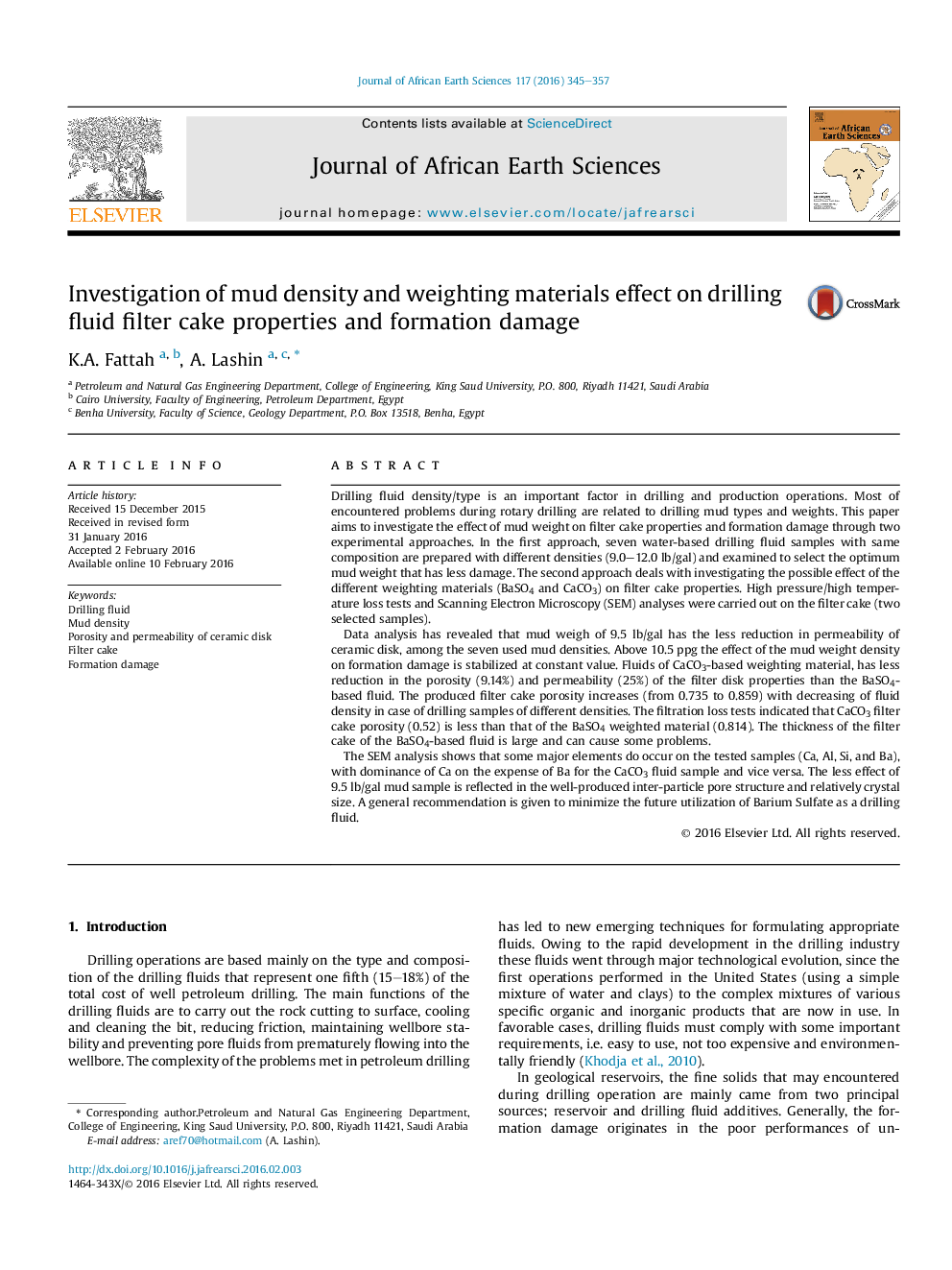 • The effect of mud weight on filter cake properties and formation damage is investigated.
• Mud weigh of 9.5 lb/gal has the less reduction in permeability of ceramic disk.
• Fluids of CaCO3 weighting material, has less reduction of the filter disk porosity (9.14%) and permeability (25%) than the BaSO4 fluid.
• The thickness of the filter cake of the BaSO4-based fluid is large and can cause some problems.
• Recommendation is given to minimize the utilization of Barium sulfate as a drilling fluid.

Drilling fluid density/type is an important factor in drilling and production operations. Most of encountered problems during rotary drilling are related to drilling mud types and weights. This paper aims to investigate the effect of mud weight on filter cake properties and formation damage through two experimental approaches. In the first approach, seven water-based drilling fluid samples with same composition are prepared with different densities (9.0–12.0 lb/gal) and examined to select the optimum mud weight that has less damage. The second approach deals with investigating the possible effect of the different weighting materials (BaSO4 and CaCO3) on filter cake properties. High pressure/high temperature loss tests and Scanning Electron Microscopy (SEM) analyses were carried out on the filter cake (two selected samples).Data analysis has revealed that mud weigh of 9.5 lb/gal has the less reduction in permeability of ceramic disk, among the seven used mud densities. Above 10.5 ppg the effect of the mud weight density on formation damage is stabilized at constant value. Fluids of CaCO3-based weighting material, has less reduction in the porosity (9.14%) and permeability (25%) of the filter disk properties than the BaSO4-based fluid. The produced filter cake porosity increases (from 0.735 to 0.859) with decreasing of fluid density in case of drilling samples of different densities. The filtration loss tests indicated that CaCO3 filter cake porosity (0.52) is less than that of the BaSO4 weighted material (0.814). The thickness of the filter cake of the BaSO4-based fluid is large and can cause some problems.The SEM analysis shows that some major elements do occur on the tested samples (Ca, Al, Si, and Ba), with dominance of Ca on the expense of Ba for the CaCO3 fluid sample and vice versa. The less effect of 9.5 lb/gal mud sample is reflected in the well-produced inter-particle pore structure and relatively crystal size. A general recommendation is given to minimize the future utilization of Barium Sulfate as a drilling fluid.