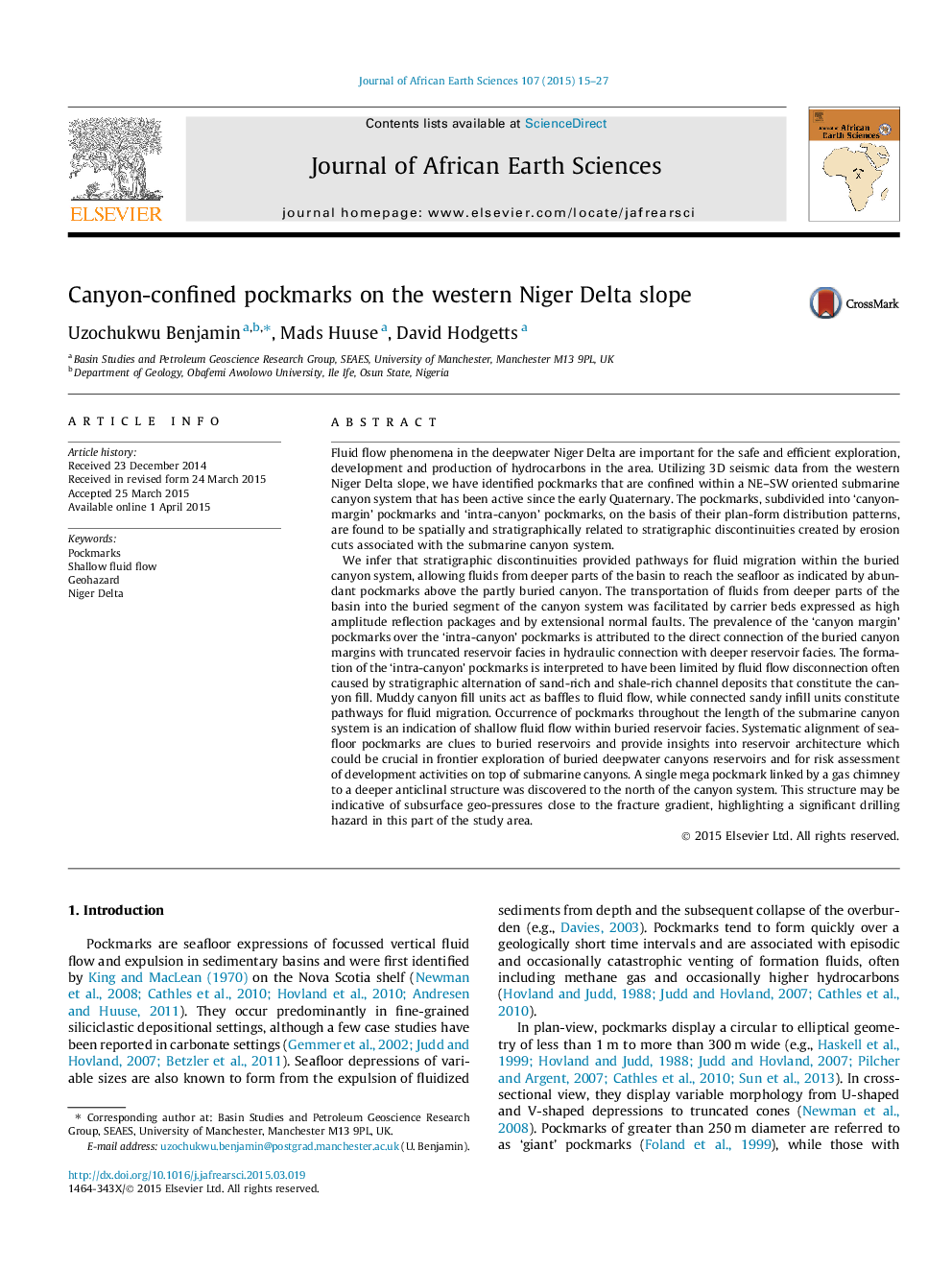 • First documentation of canyon-confined pockmarks on the western Niger Delta slope.
• The pockmarks are grouped into “canyon-margin” and “intra-canyon” pockmarks.
• Associated fluid migration was through canyon and channel cuts in canyon system.
• Pockmark distribution linked to spatio-stratigraphic distribution of the cuts.
• A near-circular mega-pockmark has been documented on the western Niger Delta slope.

Fluid flow phenomena in the deepwater Niger Delta are important for the safe and efficient exploration, development and production of hydrocarbons in the area. Utilizing 3D seismic data from the western Niger Delta slope, we have identified pockmarks that are confined within a NE–SW oriented submarine canyon system that has been active since the early Quaternary. The pockmarks, subdivided into ‘canyon-margin’ pockmarks and ‘intra-canyon’ pockmarks, on the basis of their plan-form distribution patterns, are found to be spatially and stratigraphically related to stratigraphic discontinuities created by erosion cuts associated with the submarine canyon system.We infer that stratigraphic discontinuities provided pathways for fluid migration within the buried canyon system, allowing fluids from deeper parts of the basin to reach the seafloor as indicated by abundant pockmarks above the partly buried canyon. The transportation of fluids from deeper parts of the basin into the buried segment of the canyon system was facilitated by carrier beds expressed as high amplitude reflection packages and by extensional normal faults. The prevalence of the ‘canyon margin’ pockmarks over the ‘intra-canyon’ pockmarks is attributed to the direct connection of the buried canyon margins with truncated reservoir facies in hydraulic connection with deeper reservoir facies. The formation of the ‘intra-canyon’ pockmarks is interpreted to have been limited by fluid flow disconnection often caused by stratigraphic alternation of sand-rich and shale-rich channel deposits that constitute the canyon fill. Muddy canyon fill units act as baffles to fluid flow, while connected sandy infill units constitute pathways for fluid migration. Occurrence of pockmarks throughout the length of the submarine canyon system is an indication of shallow fluid flow within buried reservoir facies. Systematic alignment of seafloor pockmarks are clues to buried reservoirs and provide insights into reservoir architecture which could be crucial in frontier exploration of buried deepwater canyons reservoirs and for risk assessment of development activities on top of submarine canyons. A single mega pockmark linked by a gas chimney to a deeper anticlinal structure was discovered to the north of the canyon system. This structure may be indicative of subsurface geo-pressures close to the fracture gradient, highlighting a significant drilling hazard in this part of the study area.