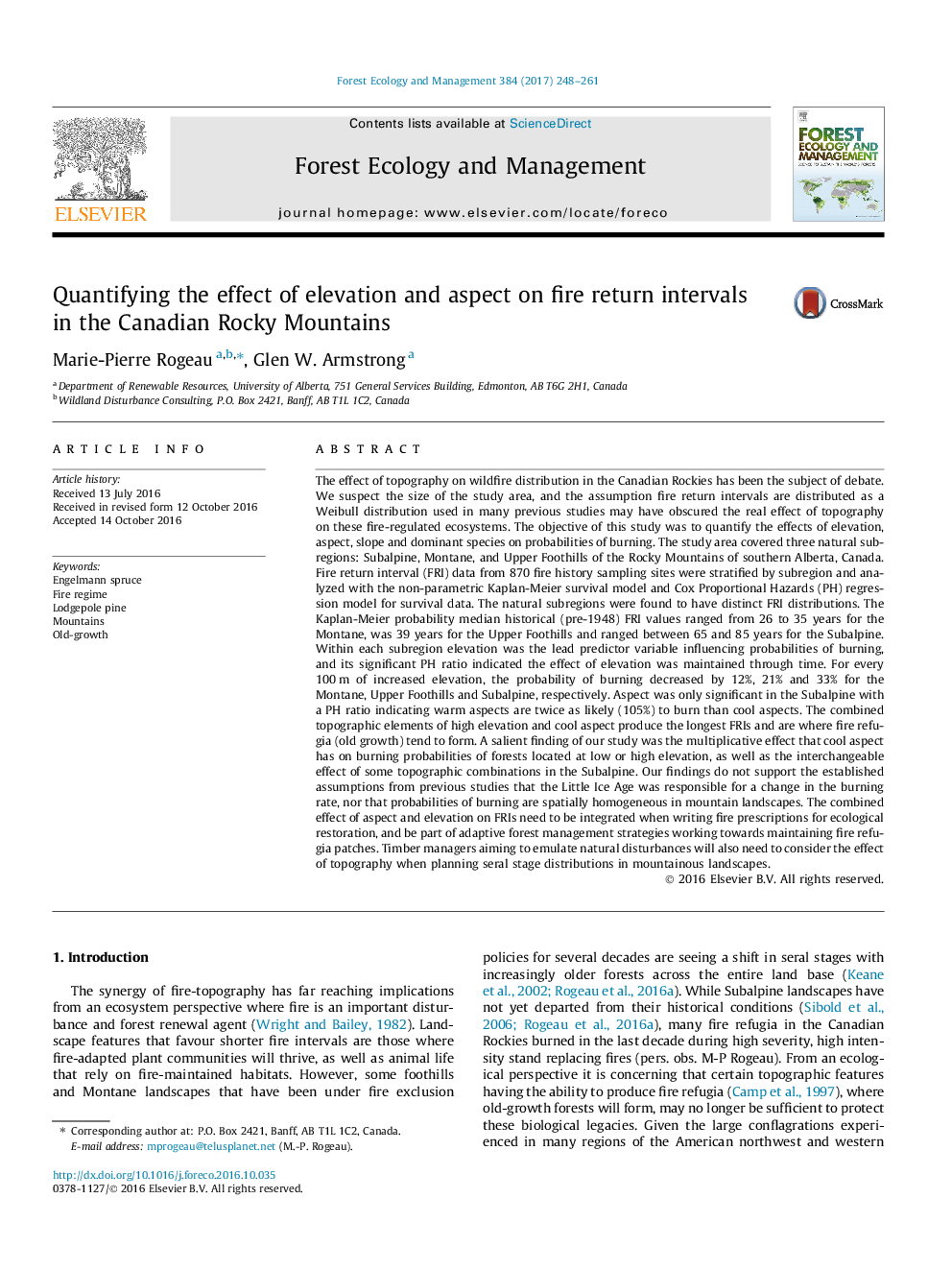 چکیده انگلیسی
The effect of topography on wildfire distribution in the Canadian Rockies has been the subject of debate. We suspect the size of the study area, and the assumption fire return intervals are distributed as a Weibull distribution used in many previous studies may have obscured the real effect of topography on these fire-regulated ecosystems. The objective of this study was to quantify the effects of elevation, aspect, slope and dominant species on probabilities of burning. The study area covered three natural subregions: Subalpine, Montane, and Upper Foothills of the Rocky Mountains of southern Alberta, Canada. Fire return interval (FRI) data from 870 fire history sampling sites were stratified by subregion and analyzed with the non-parametric Kaplan-Meier survival model and Cox Proportional Hazards (PH) regression model for survival data. The natural subregions were found to have distinct FRI distributions. The Kaplan-Meier probability median historical (pre-1948) FRI values ranged from 26 to 35 years for the Montane, was 39 years for the Upper Foothills and ranged between 65 and 85 years for the Subalpine. Within each subregion elevation was the lead predictor variable influencing probabilities of burning, and its significant PH ratio indicated the effect of elevation was maintained through time. For every 100Â m of increased elevation, the probability of burning decreased by 12%, 21% and 33% for the Montane, Upper Foothills and Subalpine, respectively. Aspect was only significant in the Subalpine with a PH ratio indicating warm aspects are twice as likely (105%) to burn than cool aspects. The combined topographic elements of high elevation and cool aspect produce the longest FRIs and are where fire refugia (old growth) tend to form. A salient finding of our study was the multiplicative effect that cool aspect has on burning probabilities of forests located at low or high elevation, as well as the interchangeable effect of some topographic combinations in the Subalpine. Our findings do not support the established assumptions from previous studies that the Little Ice Age was responsible for a change in the burning rate, nor that probabilities of burning are spatially homogeneous in mountain landscapes. The combined effect of aspect and elevation on FRIs need to be integrated when writing fire prescriptions for ecological restoration, and be part of adaptive forest management strategies working towards maintaining fire refugia patches. Timber managers aiming to emulate natural disturbances will also need to consider the effect of topography when planning seral stage distributions in mountainous landscapes.
ناشر
Database: Elsevier - ScienceDirect (ساینس دایرکت)
Journal: Forest Ecology and Management - Volume 384, 15 January 2017, Pages 248-261
نویسندگان
Marie-Pierre Rogeau, Glen W. Armstrong,
دانلود مقاله + سفارش ترجمه
دانلود مقاله ISI انگلیسی
رایگان برای ایرانیان
سفارش ترجمه تخصصی
با تضمین قیمت و کیفیت
منتشر شده در