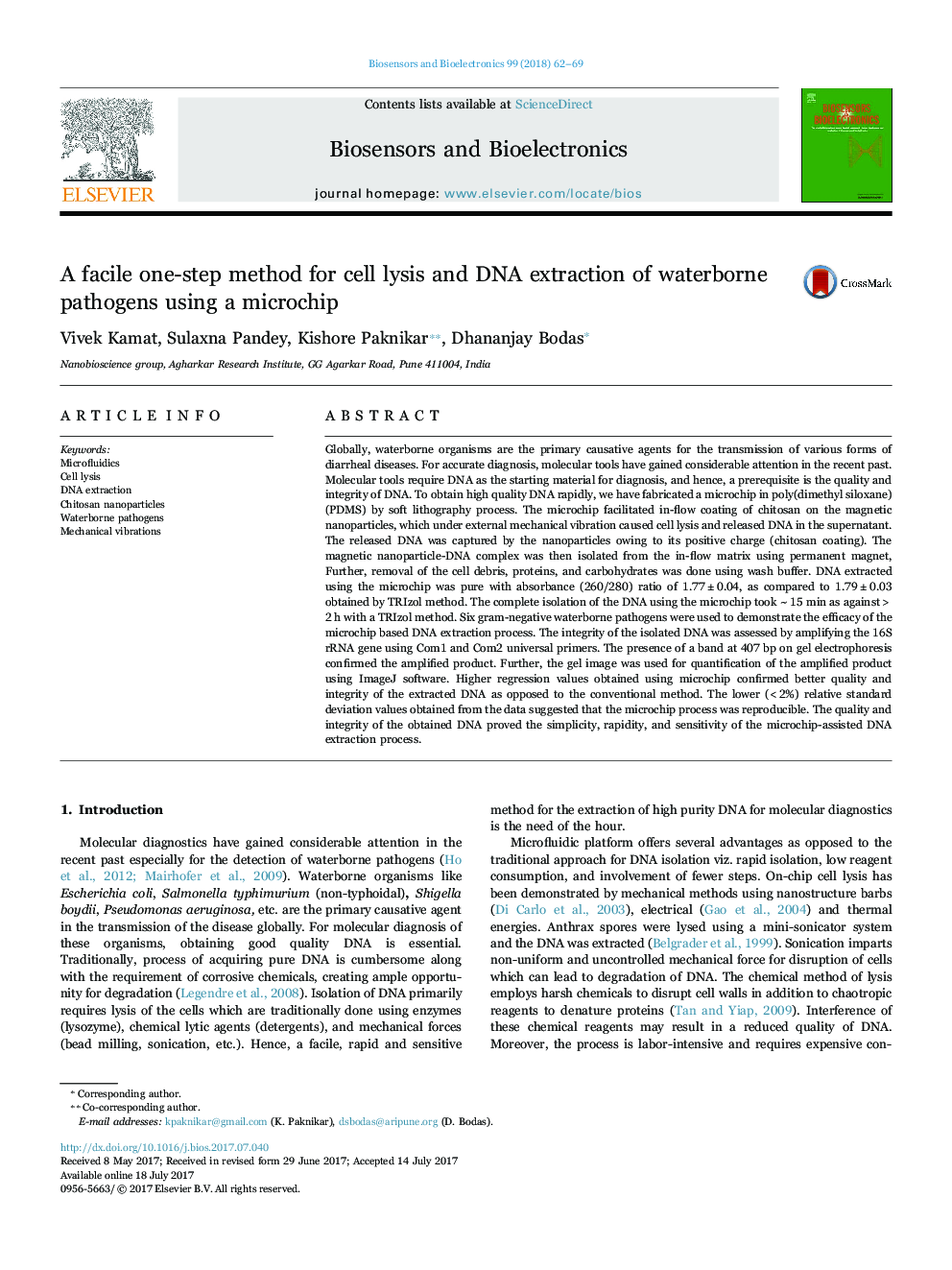 Globally, waterborne organisms are the primary causative agents for the transmission of various forms of diarrheal diseases. For accurate diagnosis, molecular tools have gained considerable attention in the recent past. Molecular tools require DNA as the starting material for diagnosis, and hence, a prerequisite is the quality and integrity of DNA. To obtain high quality DNA rapidly, we have fabricated a microchip in poly(dimethyl siloxane) (PDMS) by soft lithography process. The microchip facilitated in-flow coating of chitosan on the magnetic nanoparticles, which under external mechanical vibration caused cell lysis and released DNA in the supernatant. The released DNA was captured by the nanoparticles owing to its positive charge (chitosan coating). The magnetic nanoparticle-DNA complex was then isolated from the in-flow matrix using permanent magnet, Further, removal of the cell debris, proteins, and carbohydrates was done using wash buffer. DNA extracted using the microchip was pure with absorbance (260/280) ratio of 1.77Â±0.04, as compared to 1.79Â±0.03 obtained by TRIzol method. The complete isolation of the DNA using the microchip took ~ 15Â min as against>2Â h with a TRIzol method. Six gram-negative waterborne pathogens were used to demonstrate the efficacy of the microchip based DNA extraction process. The integrity of the isolated DNA was assessed by amplifying the 16S rRNA gene using Com1 and Com2 universal primers. The presence of a band at 407Â bp on gel electrophoresis confirmed the amplified product. Further, the gel image was used for quantification of the amplified product using ImageJ software. Higher regression values obtained using microchip confirmed better quality and integrity of the extracted DNA as opposed to the conventional method. The lower (<2%) relative standard deviation values obtained from the data suggested that the microchip process was reproducible. The quality and integrity of the obtained DNA proved the simplicity, rapidity, and sensitivity of the microchip-assisted DNA extraction process.