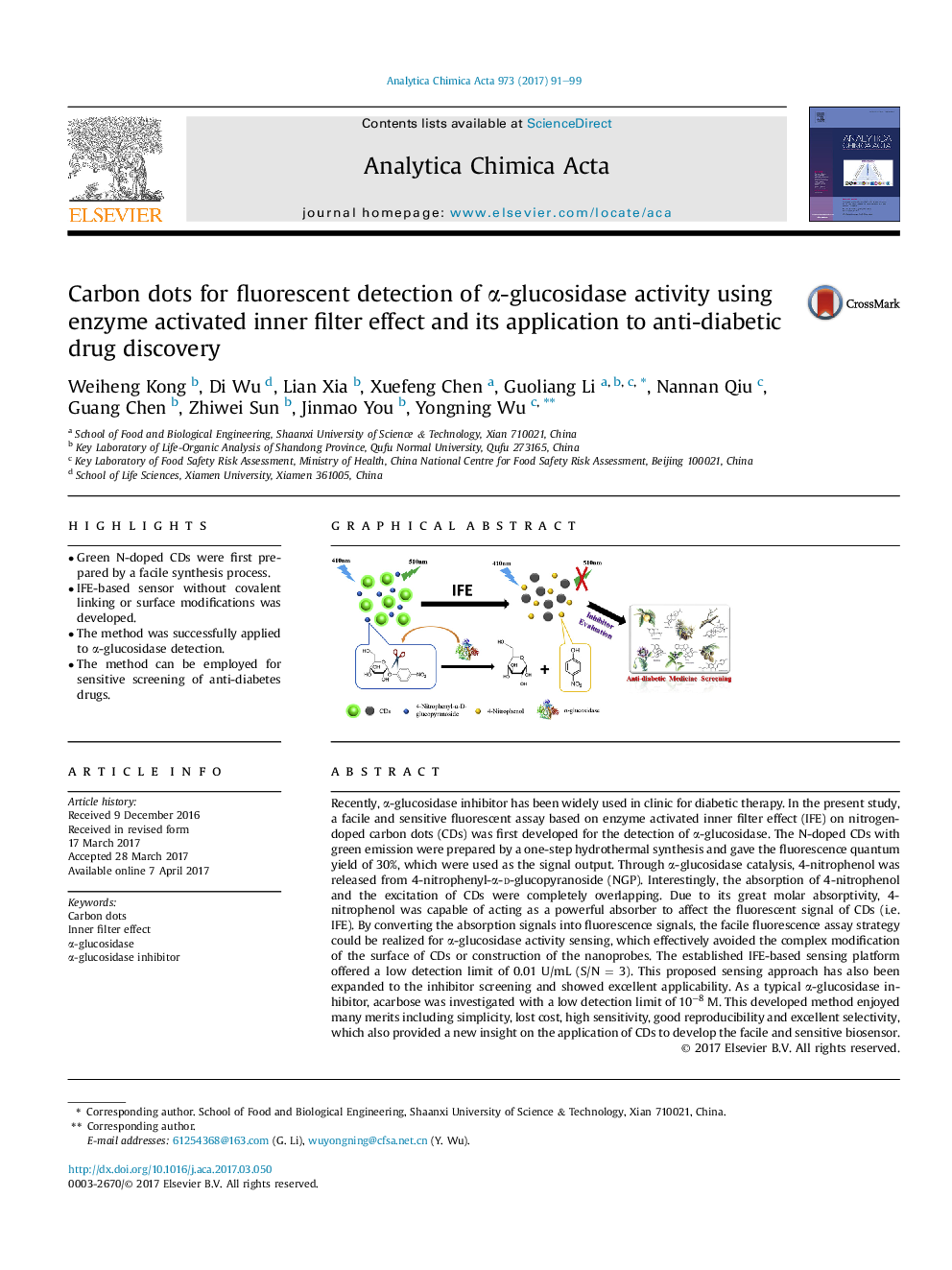 - Green N-doped CDs were first prepared by a facile synthesis process.
- IFE-based sensor without covalent linking or surface modifications was developed.
- The method was successfully applied to Î±-glucosidase detection.
- The method can be employed for sensitive screening of anti-diabetes drugs.

Recently, Î±-glucosidase inhibitor has been widely used in clinic for diabetic therapy. In the present study, a facile and sensitive fluorescent assay based on enzyme activated inner filter effect (IFE) on nitrogen-doped carbon dots (CDs) was first developed for the detection of Î±-glucosidase. The N-doped CDs with green emission were prepared by a one-step hydrothermal synthesis and gave the fluorescence quantum yield of 30%, which were used as the signal output. Through Î±-glucosidase catalysis, 4-nitrophenol was released from 4-nitrophenyl-Î±-d-glucopyranoside (NGP). Interestingly, the absorption of 4-nitrophenol and the excitation of CDs were completely overlapping. Due to its great molar absorptivity, 4-nitrophenol was capable of acting as a powerful absorber to affect the fluorescent signal of CDs (i.e. IFE). By converting the absorption signals into fluorescence signals, the facile fluorescence assay strategy could be realized for Î±-glucosidase activity sensing, which effectively avoided the complex modification of the surface of CDs or construction of the nanoprobes. The established IFE-based sensing platform offered a low detection limit of 0.01 U/mL (S/NÂ =Â 3). This proposed sensing approach has also been expanded to the inhibitor screening and showed excellent applicability. As a typical Î±-glucosidase inhibitor, acarbose was investigated with a low detection limit of 10â8Â M. This developed method enjoyed many merits including simplicity, lost cost, high sensitivity, good reproducibility and excellent selectivity, which also provided a new insight on the application of CDs to develop the facile and sensitive biosensor.