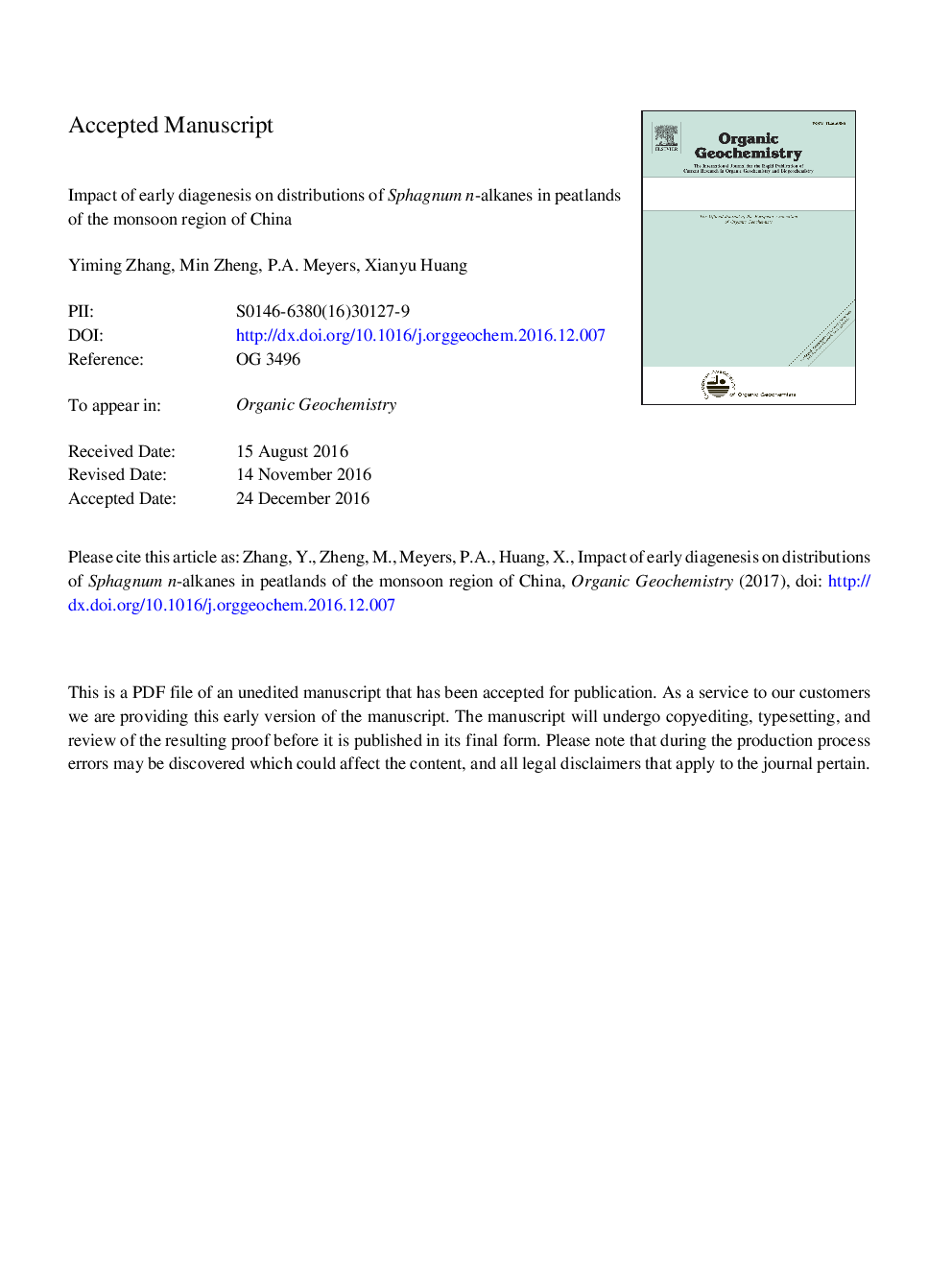 چکیده انگلیسی
Sphagnum species are important peat-forming plants in wetlands the world over. Their n-alkane distributions are typically characterized by a predominance of mid-chain (C23 and C25) alkanes, a property that has been employed in paleoclimatic reconstruction based on peat sequences. However, knowledge of the fate of Sphagnum-derived n-alkanes during the very early stage of diagenesis remains limited. This study compares the n-alkane differences between samples of fresh plants and litter collected from four peatlands across the monsoon region of China. The results clearly show that the distributions of Sphagnum-derived n-alkanes differ between the plants and the litter, with proportional decreases in C23 and C25n-alkanes and increases in C29 and C31 homologs in the litter. Other than the influence of species shifts, changes in the n-alkane distributions between the fresh plants and litter samples may be caused by preferential degradation of mid-chain n-alkanes (C23 and C25) relative to their longer chain homologues (C29 and C31) during the early diagenesis of Sphagnum n-alkanes. This hypothesis is supported by decreases in CPI values and positive excursions of Î´13C values of C23 and C29n-alkanes from the plant to the litter samples. Regardless of what the exact mechanisms for the changes may be, the Paq ratio should be applied with caution as a paleoclimatic proxy in peat deposits, especially those located in warmer climates or deposited during former warmer stages. Relatively low Paq values may result from elevated microbial degradation of Sphagnum-alkanes in such conditions and hence fail to record the former plant assemblages accurately.
ناشر
Database: Elsevier - ScienceDirect (ساینس دایرکت)
Journal: Organic Geochemistry - Volume 105, March 2017, Pages 13-19
نویسندگان
Yiming Zhang, Min Zheng, P.A. Meyers, Xianyu Huang,
دانلود مقاله + سفارش ترجمه
دانلود مقاله ISI انگلیسی
رایگان برای ایرانیان
سفارش ترجمه تخصصی
با تضمین قیمت و کیفیت
منتشر شده در