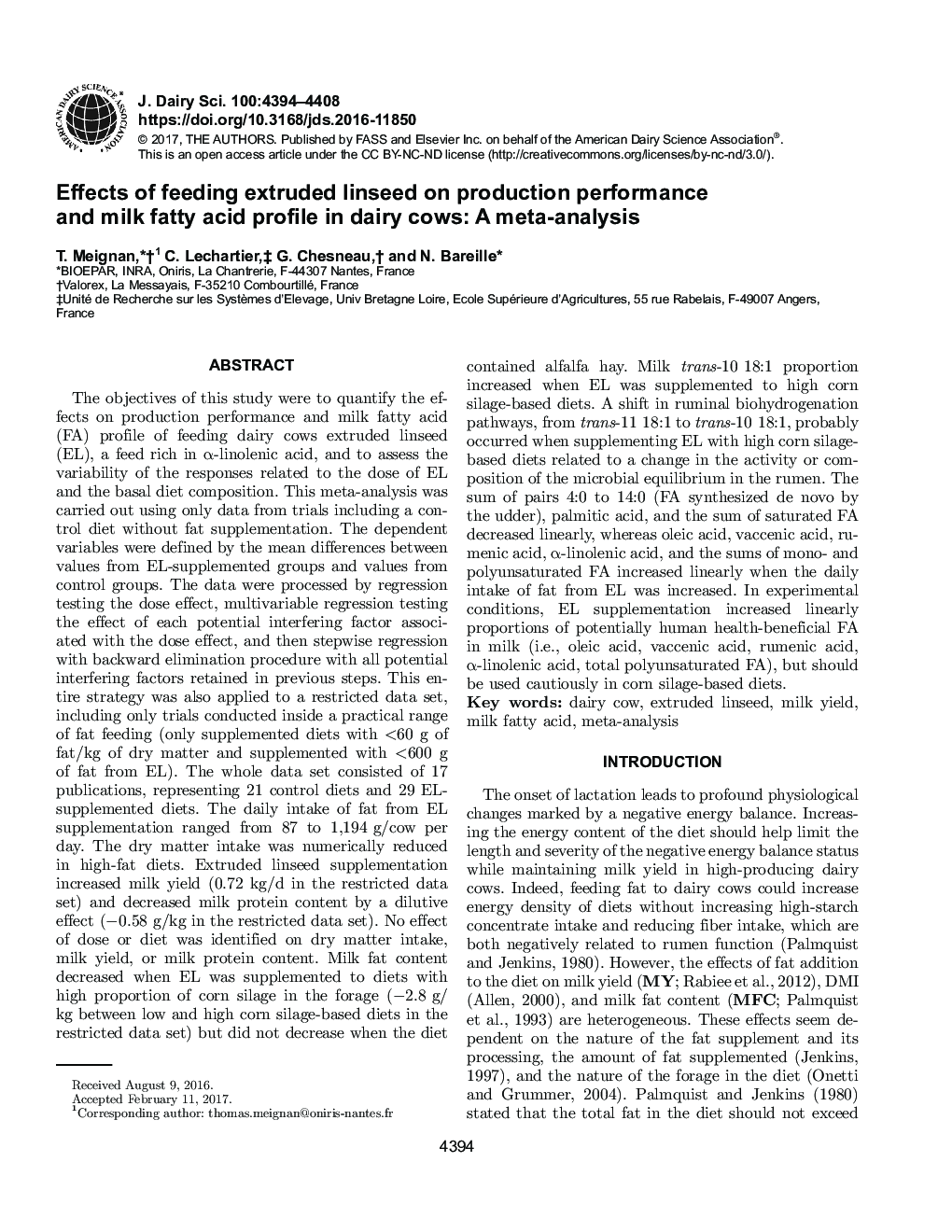 ABSTRACTThe objectives of this study were to quantify the effects on production performance and milk fatty acid (FA) profile of feeding dairy cows extruded linseed (EL), a feed rich in Î±-linolenic acid, and to assess the variability of the responses related to the dose of EL and the basal diet composition. This meta-analysis was carried out using only data from trials including a control diet without fat supplementation. The dependent variables were defined by the mean differences between values from EL-supplemented groups and values from control groups. The data were processed by regression testing the dose effect, multivariable regression testing the effect of each potential interfering factor associated with the dose effect, and then stepwise regression with backward elimination procedure with all potential interfering factors retained in previous steps. This entire strategy was also applied to a restricted data set, including only trials conducted inside a practical range of fat feeding (only supplemented diets with <60 g of fat/kg of dry matter and supplemented with <600 g of fat from EL). The whole data set consisted of 17 publications, representing 21 control diets and 29 EL-supplemented diets. The daily intake of fat from EL supplementation ranged from 87 to 1,194 g/cow per day. The dry matter intake was numerically reduced in high-fat diets. Extruded linseed supplementation increased milk yield (0.72 kg/d in the restricted data set) and decreased milk protein content by a dilutive effect (â0.58 g/kg in the restricted data set). No effect of dose or diet was identified on dry matter intake, milk yield, or milk protein content. Milk fat content decreased when EL was supplemented to diets with high proportion of corn silage in the forage (â2.8 g/kg between low and high corn silage-based diets in the restricted data set) but did not decrease when the diet contained alfalfa hay. Milk trans-10 18:1 proportion increased when EL was supplemented to high corn silage-based diets. A shift in ruminal biohydrogenation pathways, from trans-11 18:1 to trans-10 18:1, probably occurred when supplementing EL with high corn silage-based diets related to a change in the activity or composition of the microbial equilibrium in the rumen. The sum of pairs 4:0 to 14:0 (FA synthesized de novo by the udder), palmitic acid, and the sum of saturated FA decreased linearly, whereas oleic acid, vaccenic acid, rumenic acid, Î±-linolenic acid, and the sums of mono- and polyunsaturated FA increased linearly when the daily intake of fat from EL was increased. In experimental conditions, EL supplementation increased linearly proportions of potentially human health-beneficial FA in milk (i.e., oleic acid, vaccenic acid, rumenic acid, Î±-linolenic acid, total polyunsaturated FA), but should be used cautiously in corn silage-based diets.