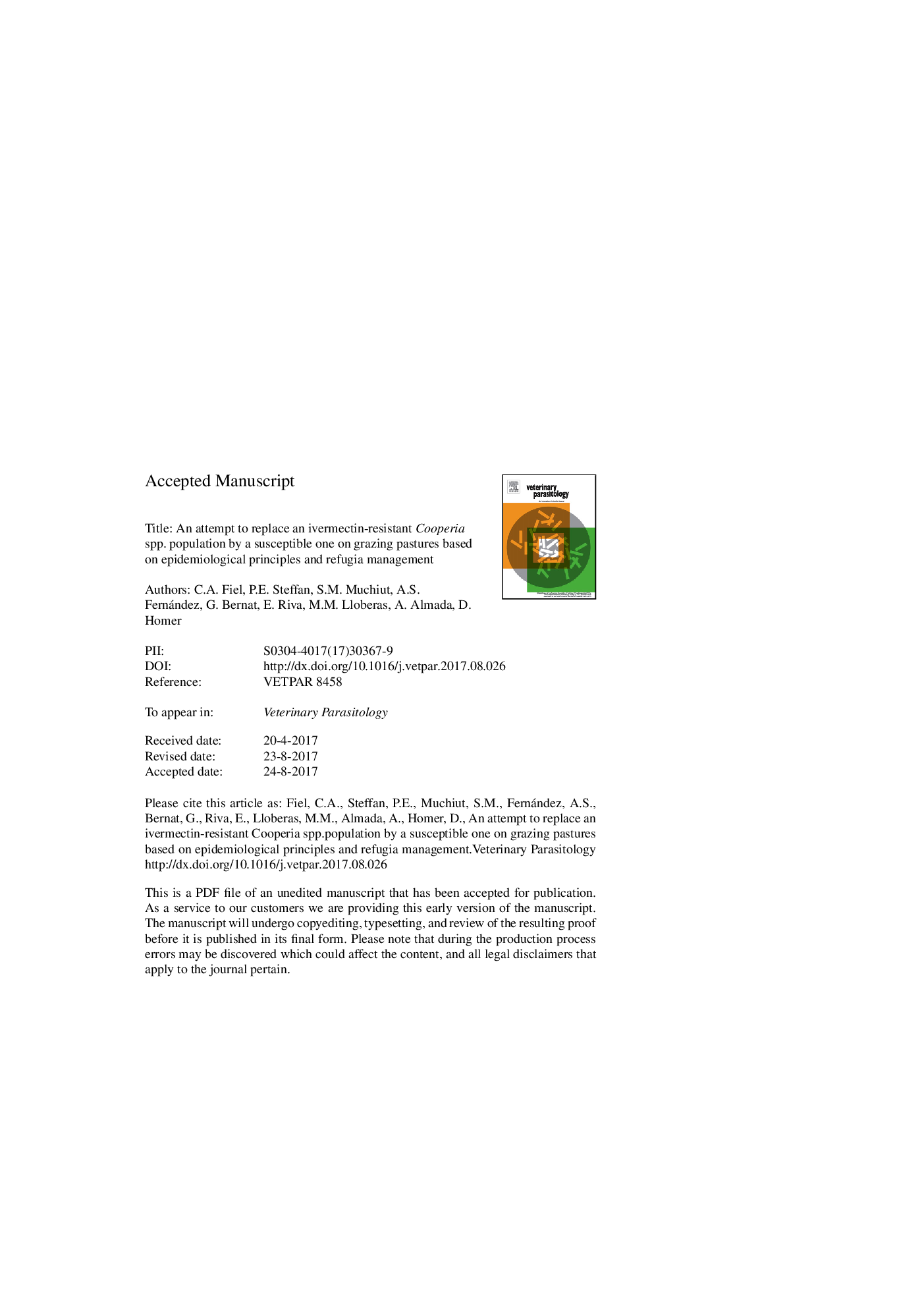 چکیده انگلیسی
The maintenance of anthelmintic-susceptible parasite refugia to delay the onset of anthelmintic resistance is an almost impossible effort in many grazing livestock production countries given that current refugia consist of already resistant parasites. Rather, efforts could be focused on replacing the resistant parasite refugia by susceptible parasite ones and implementing sustainable parasite control measures from then on. To this purpose, a trial was conducted to attempt to establish a new population of ivermectin-susceptible Cooperia sp. on a beef cattle farm with proven problems of ivermectin-resistant Cooperia. During two consecutive years, 82 (Year 1) and 100 (Year 2) recently weaned and parasite-free heifers were inoculated with 40,000 or 30,000 susceptible Cooperia L3, respectively, at a time when levels of resistant parasite refugia were normally low. The animals were subsequently allowed to graze on the problem pastures during autumn until the end of spring. Levels of parasitism in the animals and on pasture were monitored monthly and animals were treated with levamisole when needed. The combination of parasitological monitoring and local epidemiological knowledge was essential to determine when treatments were to be administered. No clinical signs of gastrointestinal parasitosis in the herd were observed throughout the study and unnecessary treatments were avoided. Faecal egg counts reduction tests (FECRT) and controlled efficacy tests (CET) employing worm counts were carried out at different times throughout the study to determine the clinical efficacy (FECRT) and the absolute efficacy (CET) of ivermectin, respectively. The clinical efficacy of ivermectin increased from an initial 73% to 99.4%, while the absolute efficacy increased from 54.1% to 87.5% after just two animal production cycles. The switch from a resistant parasite population to a susceptible one requires knowledge of parasitological epidemiology, especially in relation to seasonal variations of parasite populations in both the host and in refugia.
ناشر
Database: Elsevier - ScienceDirect (ساینس دایرکت)
Journal: Veterinary Parasitology - Volume 246, 15 November 2017, Pages 53-59
نویسندگان
C.A. Fiel, P.E. Steffan, S.M. Muchiut, A.S. Fernández, G. Bernat, E. Riva, M.M. Lloberas, A. Almada, D. Homer,
دانلود مقاله + سفارش ترجمه
دانلود مقاله ISI انگلیسی
رایگان برای ایرانیان
سفارش ترجمه تخصصی
با تضمین قیمت و کیفیت
منتشر شده در