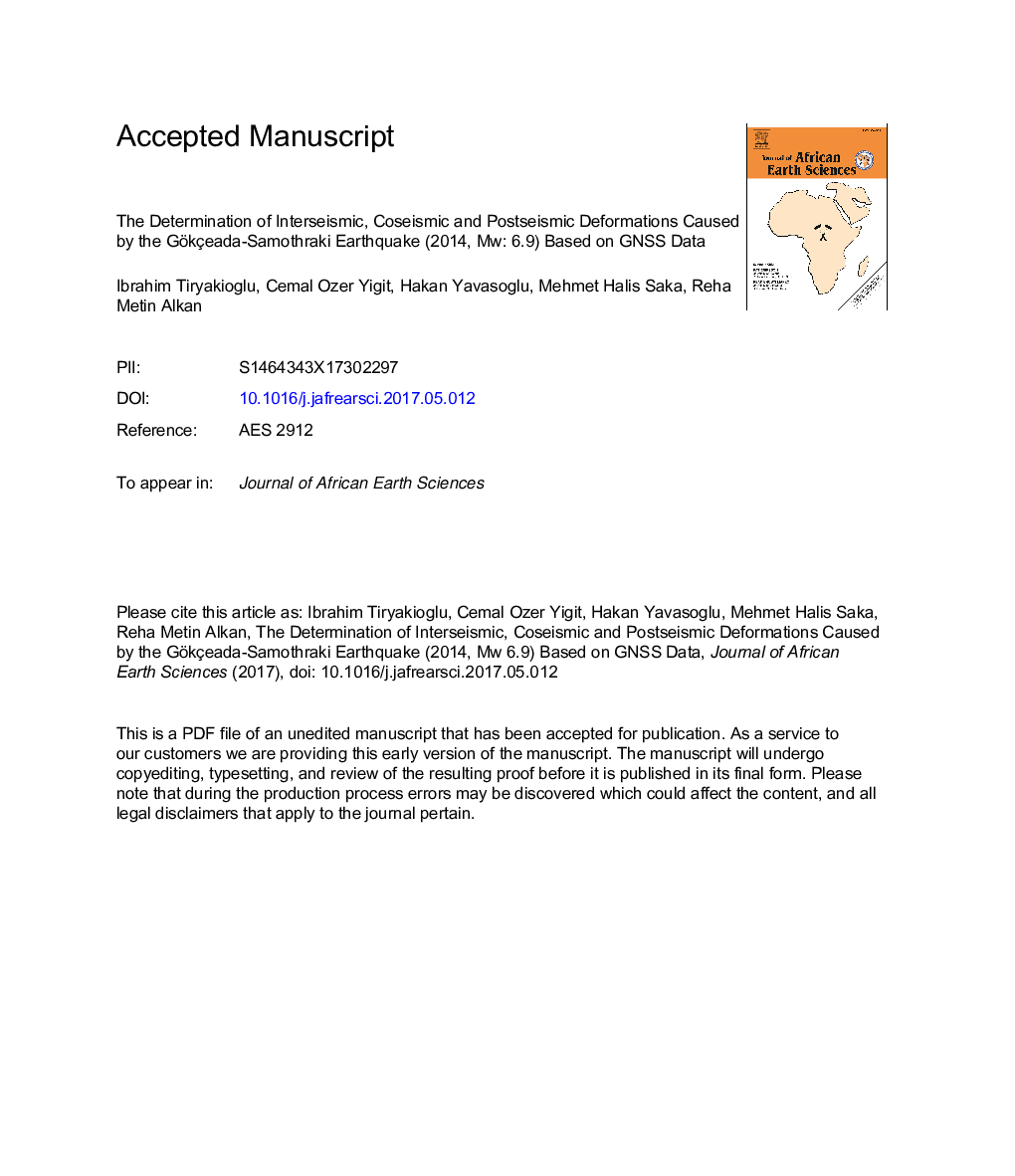 چکیده انگلیسی
Since the 1990s, seismic deformations have been commonly determined using the Global Navigation Satellite System (GNSS). Recently, the GNSS systems have become even more powerful with the use of new technologies in innovative studies. In this study, the GNSS data was used to investigate interseismic, coseismic and postseismic deformation and velocity of the Gökçeada-Samothraki earthquake (MwÂ =Â 6.9) that occurred on May 24, 2014. The data was obtained at 30Â s (0.033Â Hz) and 1Â s (1Â Hz) intervals from the GNSS receivers in the network of Continuously Operating Reference Stations, Turkey (CORS-TR). For the interseismic period, the daily coordinate time series of 12 stations located within 90-250Â km of the earthquake epicenter was evaluated for the displacement of stations over a period of approximately 2000 days prior to the day of the earthquakes, from October 1, 2008 to May 23, 2014. In order to analyze the ground motion displacement during the Gökçeada-Samothraki earthquake, 1Â Hz data from 8 continuous GNSS stations was processed using precise point positioning (PPP) and relative positioning methods to estimate the epoch-by-epoch positions of the stations. During the earthquake, coseismic displacements of approximately 7 and 30Â mm were detected in the NW direction at the YENC and CANA stations, respectively. However, at the IPSA station, a coseismic deformation of 20Â mm was observed in the NE direction. There were no significant changes at the other stations during the earthquake. For the postseismic period, the daily coordinate time series of the 12 stations were evaluated for station displacements for 570 days after the day of the earthquakes, from May 24, 2014 to January 1, 2016. The results demonstrated that no significant postseismic deformation with the exception of the EDIR station. An abnormal deformation caused by local factors was determined at the EDIR station. In this study, the PPP and the relative solution were also compared in terms of capturing the earthquake wave motion. The results demonstrated that the PPP-based solutions showed good agreement with those of relative positioning in terms of the ability to capture coseismic displacement.
ناشر
Database: Elsevier - ScienceDirect (ساینس دایرکت)
Journal: Journal of African Earth Sciences - Volume 133, September 2017, Pages 86-94
نویسندگان
Ibrahim Tiryakioglu, Cemal Ozer Yigit, Hakan Yavasoglu, Mehmet Halis Saka, Reha Metin Alkan,
دانلود مقاله + سفارش ترجمه
دانلود مقاله ISI انگلیسی
رایگان برای ایرانیان
سفارش ترجمه تخصصی
با تضمین قیمت و کیفیت
منتشر شده در