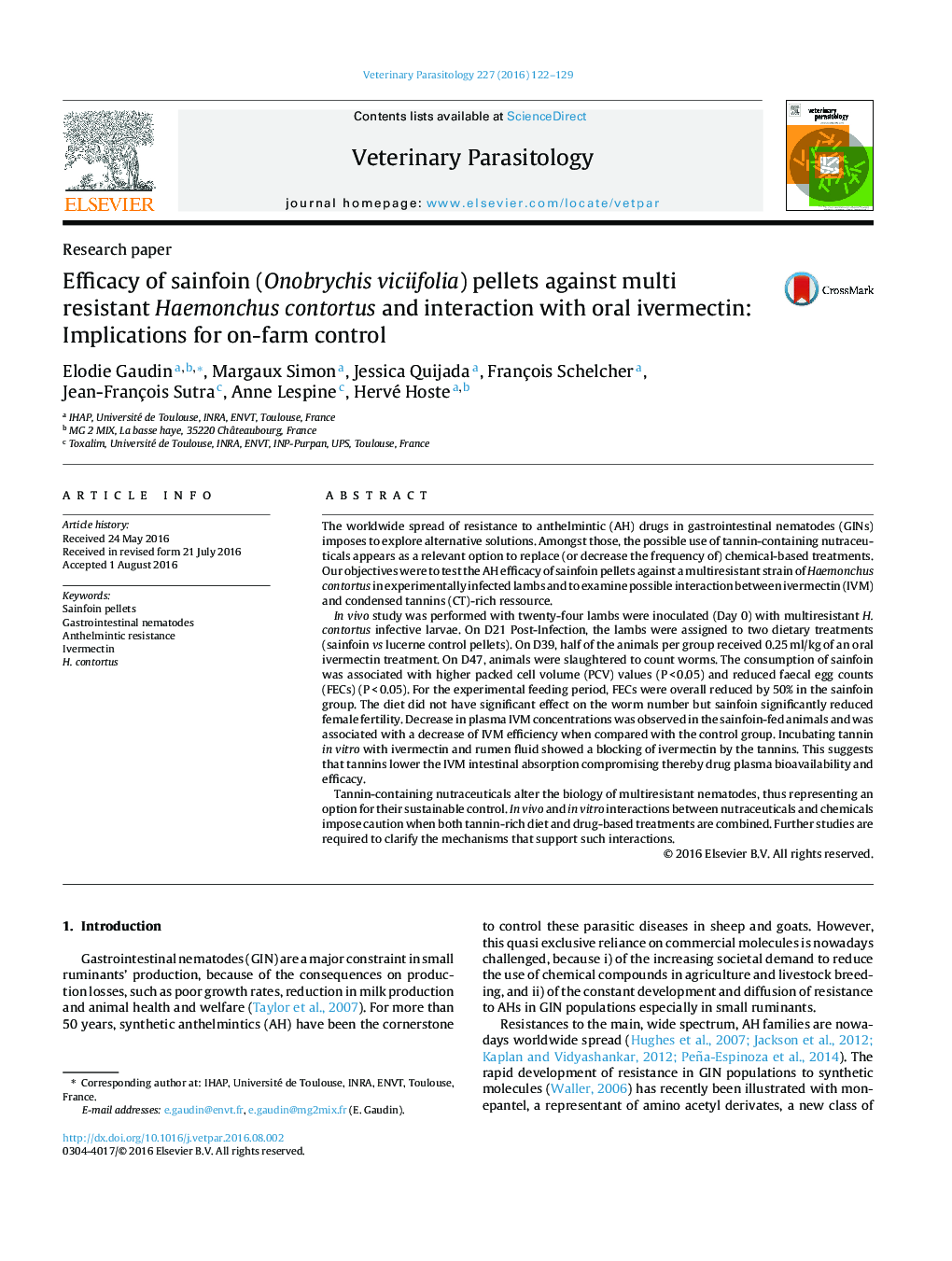 The worldwide spread of resistance to anthelmintic (AH) drugs in gastrointestinal nematodes (GINs) imposes to explore alternative solutions. Amongst those, the possible use of tannin-containing nutraceuticals appears as a relevant option to replace (or decrease the frequency of) chemical-based treatments. Our objectives were to test the AH efficacy of sainfoin pellets against a multiresistant strain of Haemonchus contortus in experimentally infected lambs and to examine possible interaction between ivermectin (IVM) and condensed tannins (CT)-rich ressource.In vivo study was performed with twenty-four lambs were inoculated (Day 0) with multiresistant H. contortus infective larvae. On D21 Post-Infection, the lambs were assigned to two dietary treatments (sainfoin vs lucerne control pellets). On D39, half of the animals per group received 0.25Â ml/kg of an oral ivermectin treatment. On D47, animals were slaughtered to count worms. The consumption of sainfoin was associated with higher packed cell volume (PCV) values (PÂ <Â 0.05) and reduced faecal egg counts (FECs) (PÂ <Â 0.05). For the experimental feeding period, FECs were overall reduced by 50% in the sainfoin group. The diet did not have significant effect on the worm number but sainfoin significantly reduced female fertility. Decrease in plasma IVM concentrations was observed in the sainfoin-fed animals and was associated with a decrease of IVM efficiency when compared with the control group. Incubating tannin in vitro with ivermectin and rumen fluid showed a blocking of ivermectin by the tannins. This suggests that tannins lower the IVM intestinal absorption compromising thereby drug plasma bioavailability and efficacy.Tannin-containing nutraceuticals alter the biology of multiresistant nematodes, thus representing an option for their sustainable control. In vivo and in vitro interactions between nutraceuticals and chemicals impose caution when both tannin-rich diet and drug-based treatments are combined. Further studies are required to clarify the mechanisms that support such interactions.