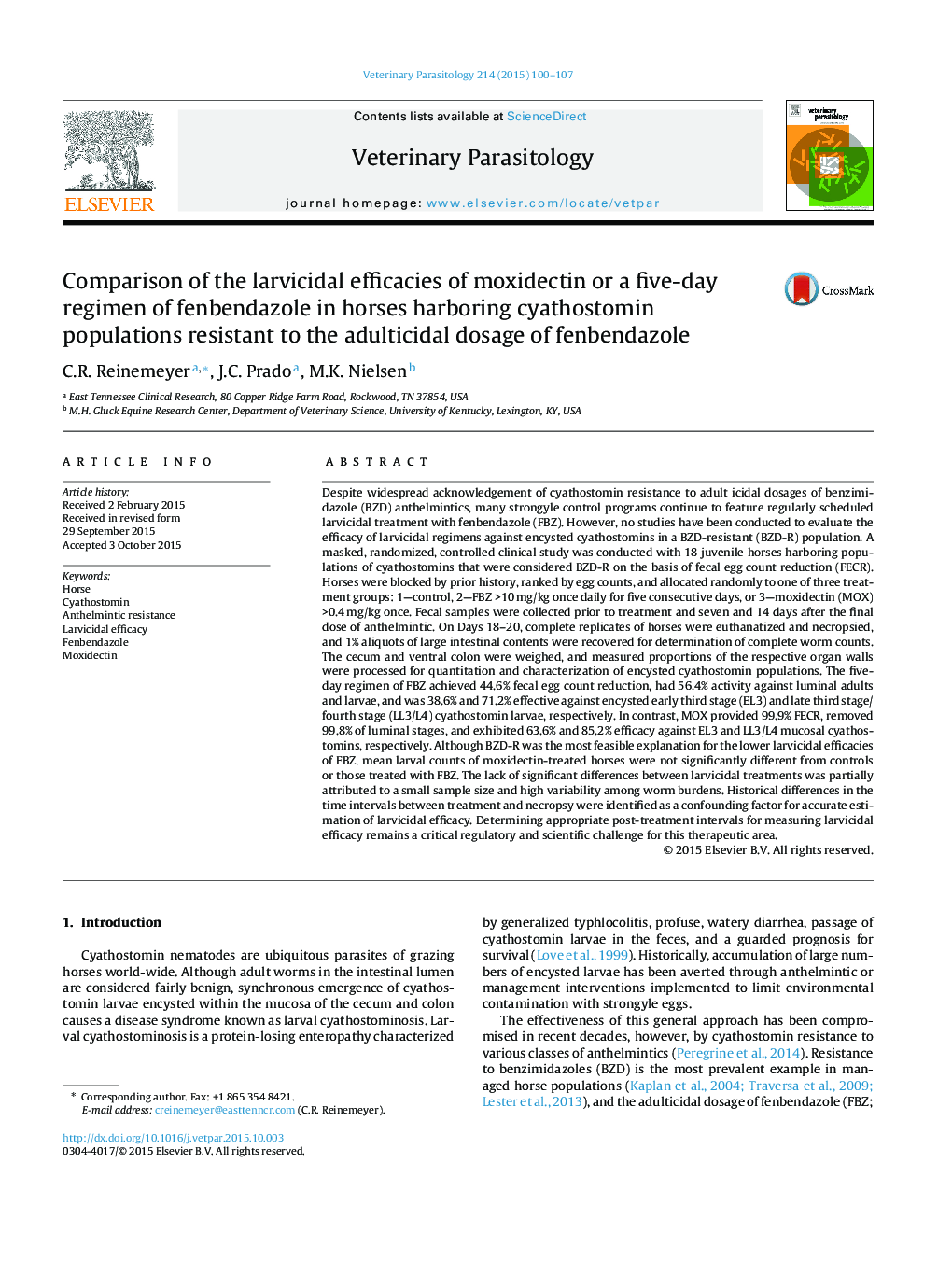 - FBZ (10Â mg/kg) for 5 days achieved 38.6% and 71.2% larvicidal efficacy against EL3 and LL3/L4 stages of a BZD-R population of cyathostomins, respectively.
- MOX exhibited 63.6% and 85.2% efficacy against EL3 and LL3/L4 encysted cyathostomins, respectively.
- The observed larvicidal efficacies of FBZ and MOX were not significantly different.
- Historical differences in the time intervals between treatment and necropsy were identified as a confounding factor for accurate estimation of larvicidal efficacy.

Despite widespread acknowledgement of cyathostomin resistance to adult icidal dosages of benzimidazole (BZD) anthelmintics, many strongyle control programs continue to feature regularly scheduled larvicidal treatment with fenbendazole (FBZ). However, no studies have been conducted to evaluate the efficacy of larvicidal regimens against encysted cyathostomins in a BZD-resistant (BZD-R) population. A masked, randomized, controlled clinical study was conducted with 18 juvenile horses harboring populations of cyathostomins that were considered BZD-R on the basis of fecal egg count reduction (FECR). Horses were blocked by prior history, ranked by egg counts, and allocated randomly to one of three treatment groups: 1-control, 2-FBZ >10Â mg/kg once daily for five consecutive days, or 3-moxidectin (MOX) >0.4Â mg/kg once. Fecal samples were collected prior to treatment and seven and 14 days after the final dose of anthelmintic. On Days 18-20, complete replicates of horses were euthanatized and necropsied, and 1% aliquots of large intestinal contents were recovered for determination of complete worm counts. The cecum and ventral colon were weighed, and measured proportions of the respective organ walls were processed for quantitation and characterization of encysted cyathostomin populations. The five-day regimen of FBZ achieved 44.6% fecal egg count reduction, had 56.4% activity against luminal adults and larvae, and was 38.6% and 71.2% effective against encysted early third stage (EL3) and late third stage/ fourth stage (LL3/L4) cyathostomin larvae, respectively. In contrast, MOX provided 99.9% FECR, removed 99.8% of luminal stages, and exhibited 63.6% and 85.2% efficacy against EL3 and LL3/L4 mucosal cyathostomins, respectively. Although BZD-R was the most feasible explanation for the lower larvicidal efficacies of FBZ, mean larval counts of moxidectin-treated horses were not significantly different from controls or those treated with FBZ. The lack of significant differences between larvicidal treatments was partially attributed to a small sample size and high variability among worm burdens. Historical differences in the time intervals between treatment and necropsy were identified as a confounding factor for accurate estimation of larvicidal efficacy. Determining appropriate post-treatment intervals for measuring larvicidal efficacy remains a critical regulatory and scientific challenge for this therapeutic area.