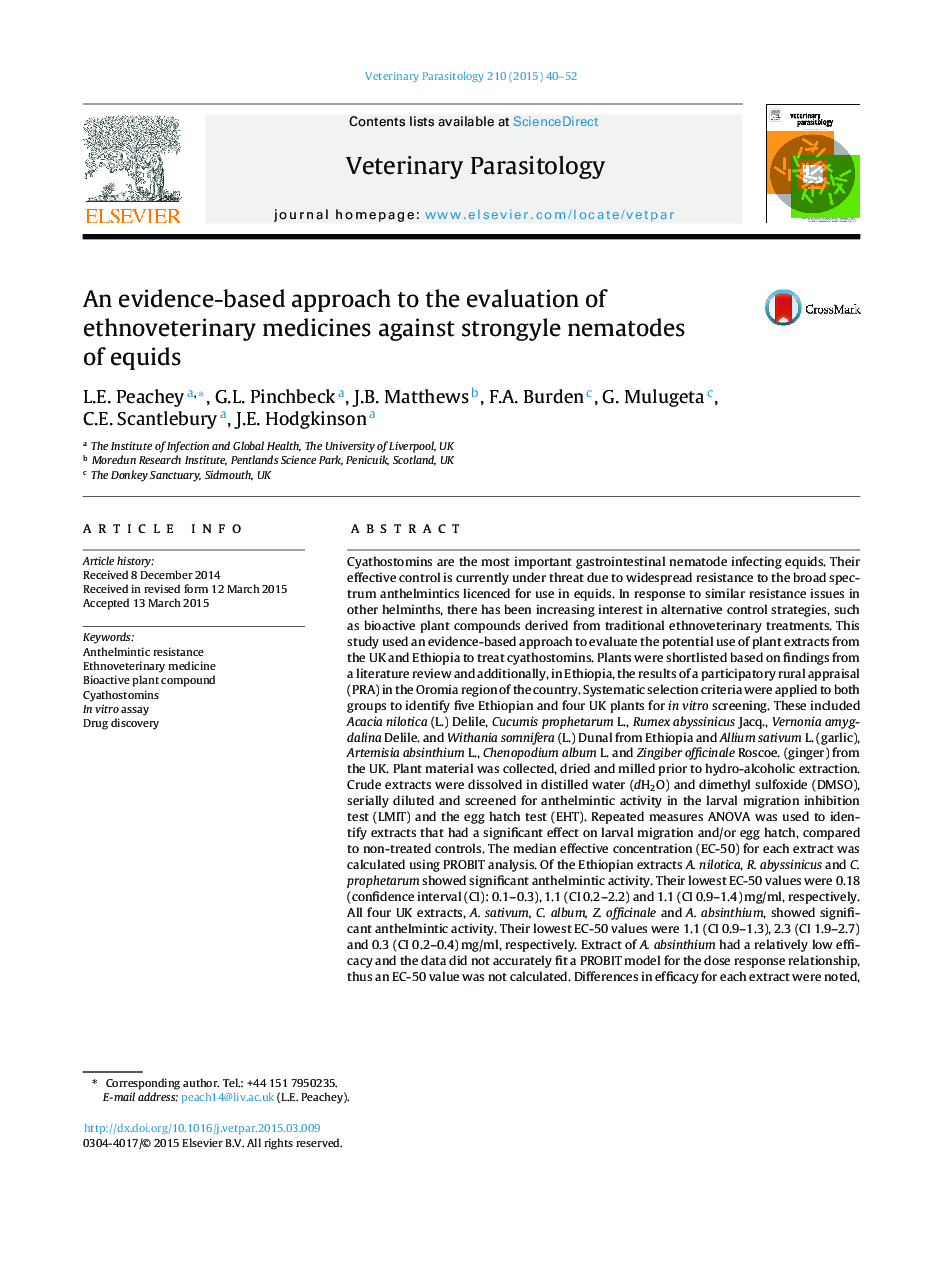 Cyathostomins are the most important gastrointestinal nematode infecting equids. Their effective control is currently under threat due to widespread resistance to the broad spectrum anthelmintics licenced for use in equids. In response to similar resistance issues in other helminths, there has been increasing interest in alternative control strategies, such as bioactive plant compounds derived from traditional ethnoveterinary treatments. This study used an evidence-based approach to evaluate the potential use of plant extracts from the UK and Ethiopia to treat cyathostomins. Plants were shortlisted based on findings from a literature review and additionally, in Ethiopia, the results of a participatory rural appraisal (PRA) in the Oromia region of the country. Systematic selection criteria were applied to both groups to identify five Ethiopian and four UK plants for in vitro screening. These included Acacia nilotica (L.) Delile, Cucumis prophetarum L., Rumex abyssinicus Jacq., Vernonia amygdalina Delile. and Withania somnifera (L.) Dunal from Ethiopia and Allium sativum L. (garlic), Artemisia absinthium L., Chenopodium album L. and Zingiber officinale Roscoe. (ginger) from the UK. Plant material was collected, dried and milled prior to hydro-alcoholic extraction. Crude extracts were dissolved in distilled water (dH2O) and dimethyl sulfoxide (DMSO), serially diluted and screened for anthelmintic activity in the larval migration inhibition test (LMIT) and the egg hatch test (EHT). Repeated measures ANOVA was used to identify extracts that had a significant effect on larval migration and/or egg hatch, compared to non-treated controls. The median effective concentration (EC-50) for each extract was calculated using PROBIT analysis. Of the Ethiopian extracts A. nilotica, R. abyssinicus and C. prophetarum showed significant anthelmintic activity. Their lowest EC-50 values were 0.18 (confidence interval (CI): 0.1-0.3), 1.1 (CI 0.2-2.2) and 1.1 (CI 0.9-1.4)Â mg/ml, respectively. All four UK extracts, A. sativum, C. album, Z. officinale and A. absinthium, showed significant anthelmintic activity. Their lowest EC-50 values were 1.1 (CI 0.9-1.3), 2.3 (CI 1.9-2.7) and 0.3 (CI 0.2-0.4)Â mg/ml, respectively. Extract of A. absinthium had a relatively low efficacy and the data did not accurately fit a PROBIT model for the dose response relationship, thus an EC-50 value was not calculated. Differences in efficacy for each extract were noted, dependent on the assay and solvent used, highlighting the need for a systematic approach to the evaluation of bioactive plant compounds. This study has identified bioactive plant extracts from the UK and Ethiopia which have potential as anthelmintic forages or feed supplements in equids.