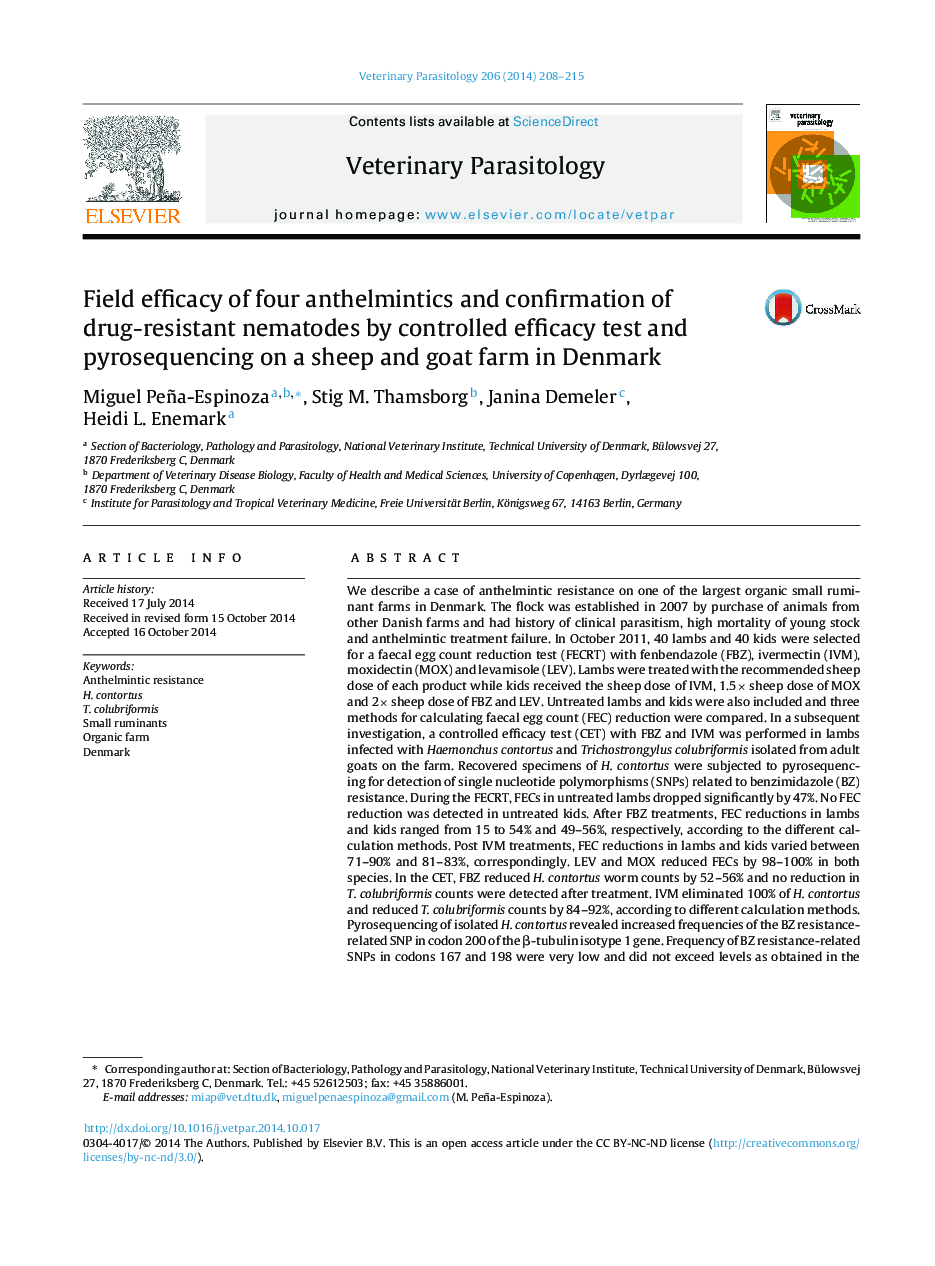 - AR was detected 4 years after establishment of a large organic sheep and goat herd.
- First confirmation of AR in H. contortus and T. colubriformis in Denmark by CET.
- A significant FEC reduction of 47% was observed in untreated lambs during the FECRT.
- Inclusion of untreated controls allowed accurate calculation of treatment efficacy.
- Correct dosing of goats in a FECRT is limited by lack of registered anthelmintics.

We describe a case of anthelmintic resistance on one of the largest organic small ruminant farms in Denmark. The flock was established in 2007 by purchase of animals from other Danish farms and had history of clinical parasitism, high mortality of young stock and anthelmintic treatment failure. In October 2011, 40 lambs and 40 kids were selected for a faecal egg count reduction test (FECRT) with fenbendazole (FBZ), ivermectin (IVM), moxidectin (MOX) and levamisole (LEV). Lambs were treated with the recommended sheep dose of each product while kids received the sheep dose of IVM, 1.5Ã sheep dose of MOX and 2Ã sheep dose of FBZ and LEV. Untreated lambs and kids were also included and three methods for calculating faecal egg count (FEC) reduction were compared. In a subsequent investigation, a controlled efficacy test (CET) with FBZ and IVM was performed in lambs infected with Haemonchus contortus and Trichostrongylus colubriformis isolated from adult goats on the farm. Recovered specimens of H. contortus were subjected to pyrosequencing for detection of single nucleotide polymorphisms (SNPs) related to benzimidazole (BZ) resistance. During the FECRT, FECs in untreated lambs dropped significantly by 47%. No FEC reduction was detected in untreated kids. After FBZ treatments, FEC reductions in lambs and kids ranged from 15 to 54% and 49-56%, respectively, according to the different calculation methods. Post IVM treatments, FEC reductions in lambs and kids varied between 71-90% and 81-83%, correspondingly. LEV and MOX reduced FECs by 98-100% in both species. In the CET, FBZ reduced H. contortus worm counts by 52-56% and no reduction in T. colubriformis counts were detected after treatment. IVM eliminated 100% of H. contortus and reduced T. colubriformis counts by 84-92%, according to different calculation methods. Pyrosequencing of isolated H. contortus revealed increased frequencies of the BZ resistance-related SNP in codon 200 of the Î²-tubulin isotype 1 gene. Frequency of BZ resistance-related SNPs in codons 167 and 198 were very low and did not exceed levels as obtained in the susceptible reference isolate. Anthelmintic resistance was confirmed in this recently established organic farm and low field efficacy of FBZ was verified by CET and pyrosequencing. BZ-resistant populations of H. contortus and T. colubriformis were isolated for the first time in Denmark. Problems with correct dosing of goats, the observed FEC reduction in untreated lambs and the relevance of including a control group in the FECRT are discussed.