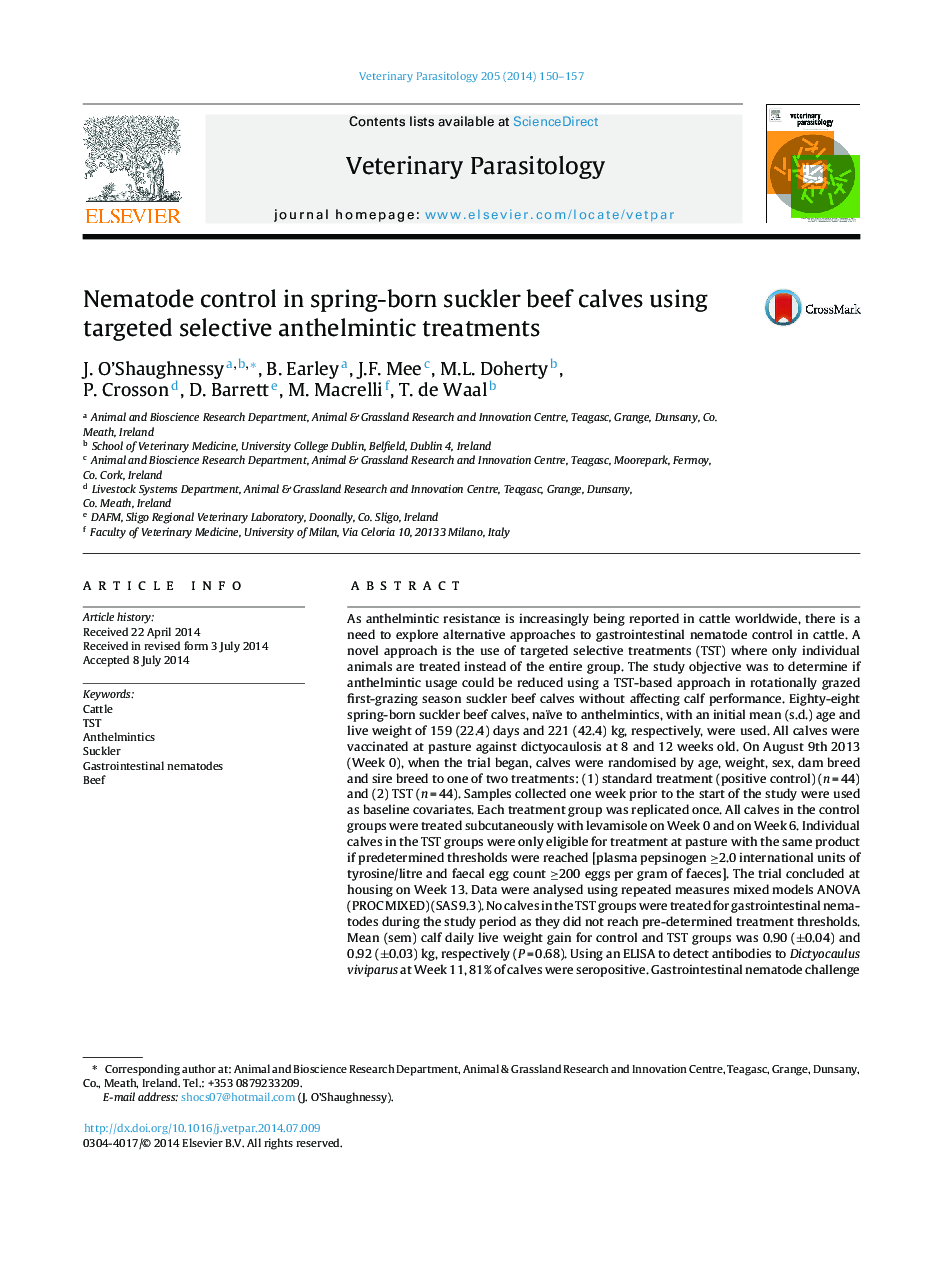 - This study examined a TST-based approach to gastrointestinal nematode (GIN) control in spring-born suckler beef calves.
- No TST calves were treated for GIN during the study period as they did not reach pre-determined treatment thresholds.
- Using an ELISA to detect antibodies to Dictyocaulus viviparus, 81% of calves were seropositive.
- GIN challenge in spring-born suckler beef calves can be controlled with minimal anthelmintic treatments.
- Suitable control measures are needed to prevent dictyocaulosis from occurring.

As anthelmintic resistance is increasingly being reported in cattle worldwide, there is a need to explore alternative approaches to gastrointestinal nematode control in cattle. A novel approach is the use of targeted selective treatments (TST) where only individual animals are treated instead of the entire group. The study objective was to determine if anthelmintic usage could be reduced using a TST-based approach in rotationally grazed first-grazing season suckler beef calves without affecting calf performance. Eighty-eight spring-born suckler beef calves, naïve to anthelmintics, with an initial mean (s.d.) age and live weight of 159 (22.4) days and 221 (42.4) kg, respectively, were used. All calves were vaccinated at pasture against dictyocaulosis at 8 and 12 weeks old. On August 9th 2013 (Week 0), when the trial began, calves were randomised by age, weight, sex, dam breed and sire breed to one of two treatments: (1) standard treatment (positive control) (nÂ =Â 44) and (2) TST (nÂ =Â 44). Samples collected one week prior to the start of the study were used as baseline covariates. Each treatment group was replicated once. All calves in the control groups were treated subcutaneously with levamisole on Week 0 and on Week 6. Individual calves in the TST groups were only eligible for treatment at pasture with the same product if predetermined thresholds were reached [plasma pepsinogen â¥2.0 international units of tyrosine/litre and faecal egg count â¥200 eggs per gram of faeces]. The trial concluded at housing on Week 13. Data were analysed using repeated measures mixed models ANOVA (PROC MIXED) (SAS 9.3). No calves in the TST groups were treated for gastrointestinal nematodes during the study period as they did not reach pre-determined treatment thresholds. Mean (sem) calf daily live weight gain for control and TST groups was 0.90 (Â±0.04) and 0.92 (Â±0.03) kg, respectively (PÂ =Â 0.68). Using an ELISA to detect antibodies to Dictyocaulus viviparus at Week 11, 81% of calves were seropositive. Gastrointestinal nematode challenge in spring-born suckler beef calves under these conditions can potentially be controlled with minimal anthelmintic treatments whilst not significantly impairing calf performance, provided appropriate control measures are taken to prevent dictyocaulosis from occurring.