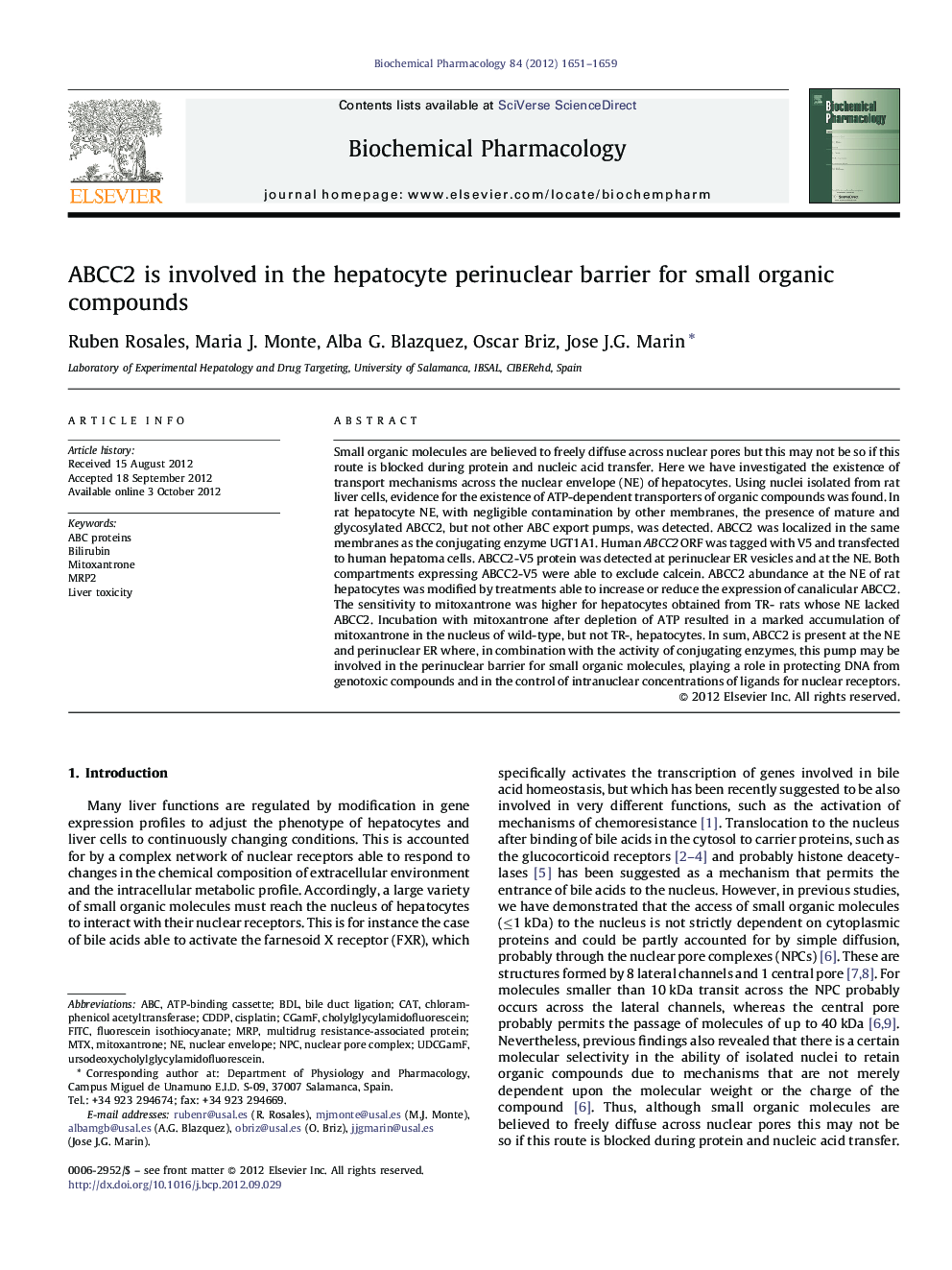 چکیده انگلیسی
Small organic molecules are believed to freely diffuse across nuclear pores but this may not be so if this route is blocked during protein and nucleic acid transfer. Here we have investigated the existence of transport mechanisms across the nuclear envelope (NE) of hepatocytes. Using nuclei isolated from rat liver cells, evidence for the existence of ATP-dependent transporters of organic compounds was found. In rat hepatocyte NE, with negligible contamination by other membranes, the presence of mature and glycosylated ABCC2, but not other ABC export pumps, was detected. ABCC2 was localized in the same membranes as the conjugating enzyme UGT1A1. Human ABCC2 ORF was tagged with V5 and transfected to human hepatoma cells. ABCC2-V5 protein was detected at perinuclear ER vesicles and at the NE. Both compartments expressing ABCC2-V5 were able to exclude calcein. ABCC2 abundance at the NE of rat hepatocytes was modified by treatments able to increase or reduce the expression of canalicular ABCC2. The sensitivity to mitoxantrone was higher for hepatocytes obtained from TR- rats whose NE lacked ABCC2. Incubation with mitoxantrone after depletion of ATP resulted in a marked accumulation of mitoxantrone in the nucleus of wild-type, but not TR-, hepatocytes. In sum, ABCC2 is present at the NE and perinuclear ER where, in combination with the activity of conjugating enzymes, this pump may be involved in the perinuclear barrier for small organic molecules, playing a role in protecting DNA from genotoxic compounds and in the control of intranuclear concentrations of ligands for nuclear receptors.
ناشر
Database: Elsevier - ScienceDirect (ساینس دایرکت)
Journal: Biochemical Pharmacology - Volume 84, Issue 12, 15 December 2012, Pages 1651-1659
نویسندگان
Ruben Rosales, Maria J. Monte, Alba G. Blazquez, Oscar Briz, Jose J.G. Marin,
دانلود مقاله + سفارش ترجمه
دانلود مقاله ISI انگلیسی
رایگان برای ایرانیان
سفارش ترجمه تخصصی
با تضمین قیمت و کیفیت
منتشر شده در