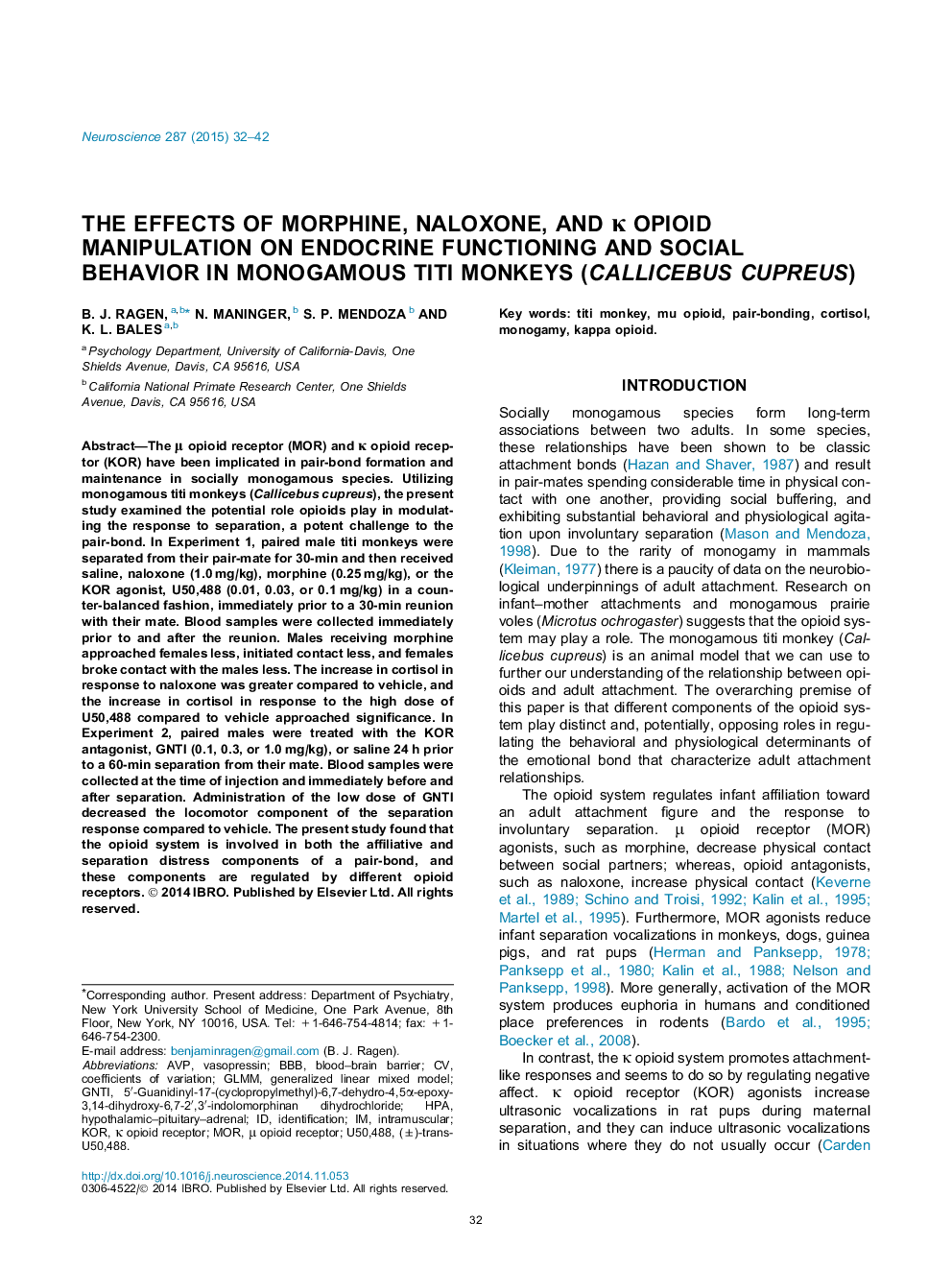 - We manipulated the Î¼ and Îº opioid receptors in the monogamous titi monkey.
- We measured cortisol, vasopressin, and behaviors with and without their pair-mate.
- Morphine decreased the number of times a male initiated contact with his pair-mate.
- Naloxone significantly increased cortisol.
- Îº opioid blockade attenuated the behavioral response to separation from a pair-mate.

The Î¼ opioid receptor (MOR) and Îº opioid receptor (KOR) have been implicated in pair-bond formation and maintenance in socially monogamous species. Utilizing monogamous titi monkeys (Callicebus cupreus), the present study examined the potential role opioids play in modulating the response to separation, a potent challenge to the pair-bond. In Experiment 1, paired male titi monkeys were separated from their pair-mate for 30-min and then received saline, naloxone (1.0Â mg/kg), morphine (0.25Â mg/kg), or the KOR agonist, U50,488 (0.01, 0.03, or 0.1Â mg/kg) in a counter-balanced fashion, immediately prior to a 30-min reunion with their mate. Blood samples were collected immediately prior to and after the reunion. Males receiving morphine approached females less, initiated contact less, and females broke contact with the males less. The increase in cortisol in response to naloxone was greater compared to vehicle, and the increase in cortisol in response to the high dose of U50,488 compared to vehicle approached significance. In Experiment 2, paired males were treated with the KOR antagonist, GNTI (0.1, 0.3, or 1.0Â mg/kg), or saline 24Â h prior to a 60-min separation from their mate. Blood samples were collected at the time of injection and immediately before and after separation. Administration of the low dose of GNTI decreased the locomotor component of the separation response compared to vehicle. The present study found that the opioid system is involved in both the affiliative and separation distress components of a pair-bond, and these components are regulated by different opioid receptors.