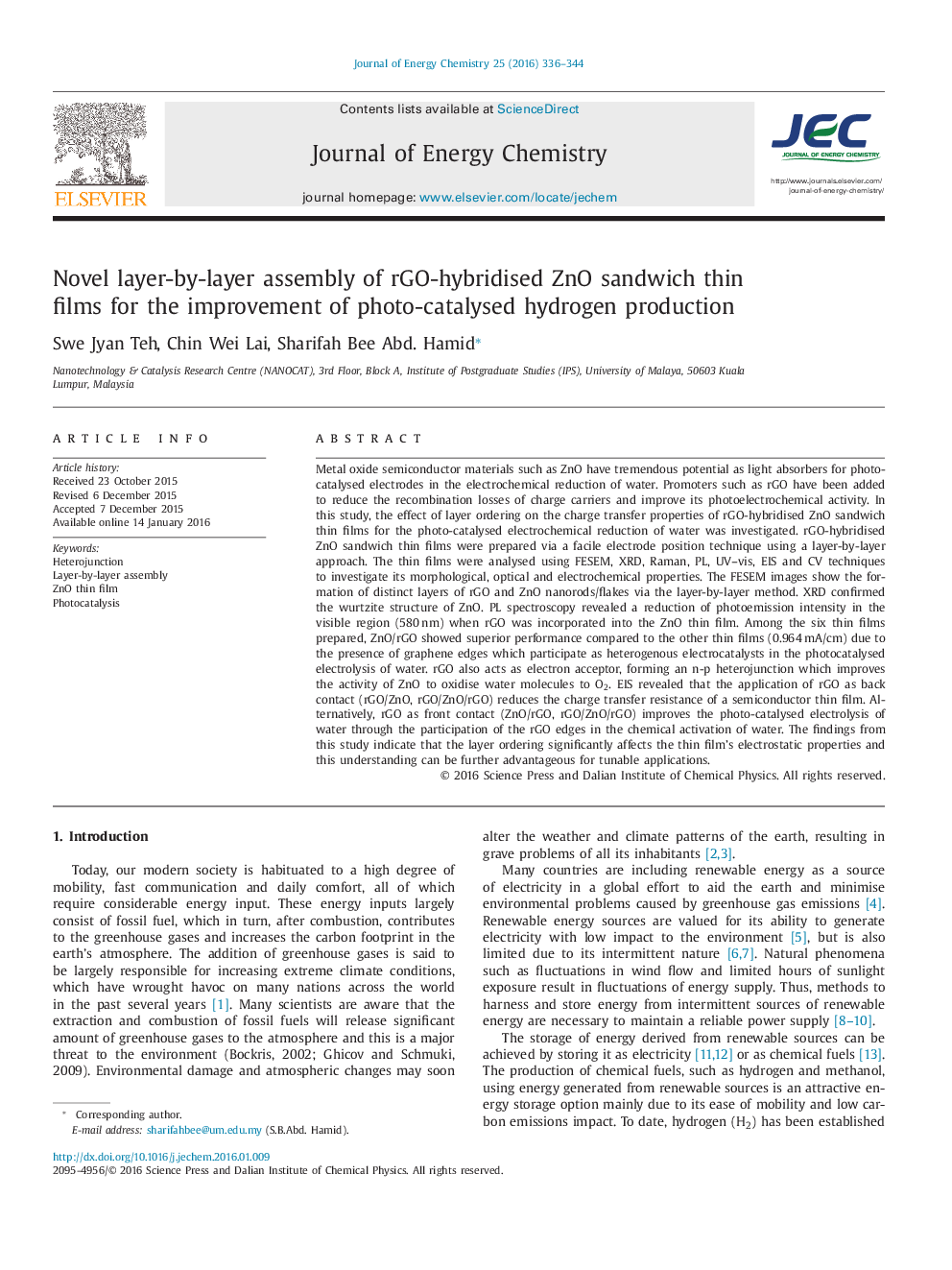 Metal oxide semiconductor materials such as ZnO have tremendous potential as light absorbers for photo-catalysed electrodes in the electrochemical reduction of water. Promoters such as rGO have been added to reduce the recombination losses of charge carriers and improve its photoelectrochemical activity. In this study, the effect of layer ordering on the charge transfer properties of rGO-hybridised ZnO sandwich thin films for the photo-catalysed electrochemical reduction of water was investigated. rGO-hybridised ZnO sandwich thin films were prepared via a facile electrode position technique using a layer-by-layer approach. The thin films were analysed using FESEM, XRD, Raman, PL, UV–vis, EIS and CV techniques to investigate its morphological, optical and electrochemical properties. The FESEM images show the formation of distinct layers of rGO and ZnO nanorods/flakes via the layer-by-layer method. XRD confirmed the wurtzite structure of ZnO. PL spectroscopy revealed a reduction of photoemission intensity in the visible region (580 nm) when rGO was incorporated into the ZnO thin film. Among the six thin films prepared, ZnO/rGO showed superior performance compared to the other thin films (0.964 mA/cm) due to the presence of graphene edges which participate as heterogenous electrocatalysts in the photocatalysed electrolysis of water. rGO also acts as electron acceptor, forming an n-p heterojunction which improves the activity of ZnO to oxidise water molecules to O2. EIS revealed that the application of rGO as back contact (rGO/ZnO, rGO/ZnO/rGO) reduces the charge transfer resistance of a semiconductor thin film. Alternatively, rGO as front contact (ZnO/rGO, rGO/ZnO/rGO) improves the photo-catalysed electrolysis of water through the participation of the rGO edges in the chemical activation of water. The findings from this study indicate that the layer ordering significantly affects the thin film's electrostatic properties and this understanding can be further advantageous for tunable applications.

The layer order of ZnO and rGO in the preparation of electrodes for photoelectrochemical water-splitting significantly alters the interaction between the electrode–electrolyte interface and electric double-layer properties.Figure optionsDownload as PowerPoint slide