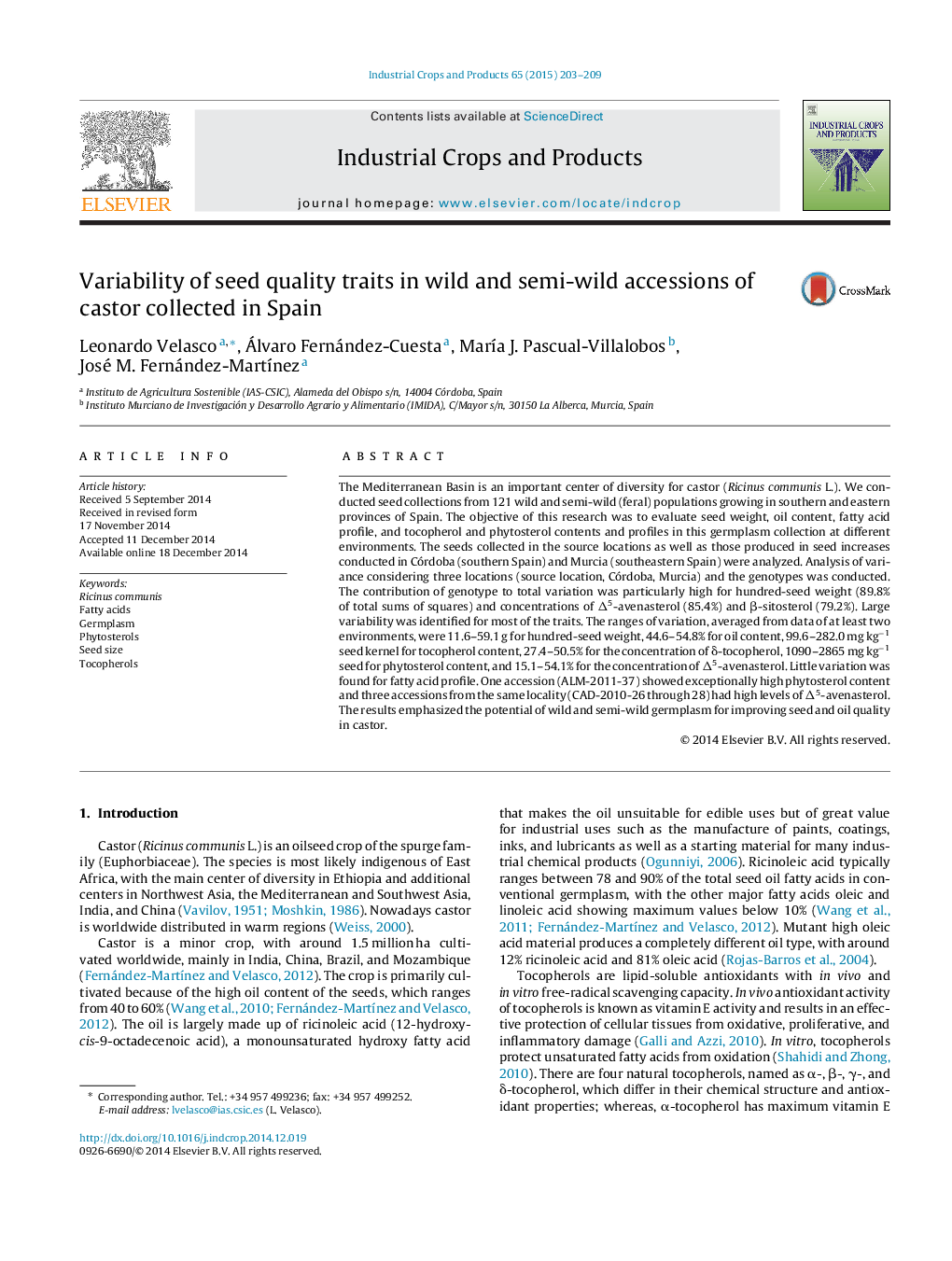 - Seeds of 121 wild and semi-wild castor populations were collected in Spain.
- The accessions were grown in two locations.
- Seed weight, oil, fatty acids, tocopherols and phytosterols were analyzed.
- Great variability was identified for most of the traits.
- The germplasm collection has great potential for oil quality improvement in castor

The Mediterranean Basin is an important center of diversity for castor (Ricinus communis L.). We conducted seed collections from 121 wild and semi-wild (feral) populations growing in southern and eastern provinces of Spain. The objective of this research was to evaluate seed weight, oil content, fatty acid profile, and tocopherol and phytosterol contents and profiles in this germplasm collection at different environments. The seeds collected in the source locations as well as those produced in seed increases conducted in Córdoba (southern Spain) and Murcia (southeastern Spain) were analyzed. Analysis of variance considering three locations (source location, Córdoba, Murcia) and the genotypes was conducted. The contribution of genotype to total variation was particularly high for hundred-seed weight (89.8% of total sums of squares) and concentrations of Î5-avenasterol (85.4%) and Î²-sitosterol (79.2%). Large variability was identified for most of the traits. The ranges of variation, averaged from data of at least two environments, were 11.6-59.1Â g for hundred-seed weight, 44.6-54.8% for oil content, 99.6-282.0Â mgÂ kgâ1 seed kernel for tocopherol content, 27.4-50.5% for the concentration of Î´-tocopherol, 1090-2865Â mgÂ kgâ1 seed for phytosterol content, and 15.1-54.1% for the concentration of Î5-avenasterol. Little variation was found for fatty acid profile. One accession (ALM-2011-37) showed exceptionally high phytosterol content and three accessions from the same locality (CAD-2010-26 through 28) had high levels of Î5-avenasterol. The results emphasized the potential of wild and semi-wild germplasm for improving seed and oil quality in castor.