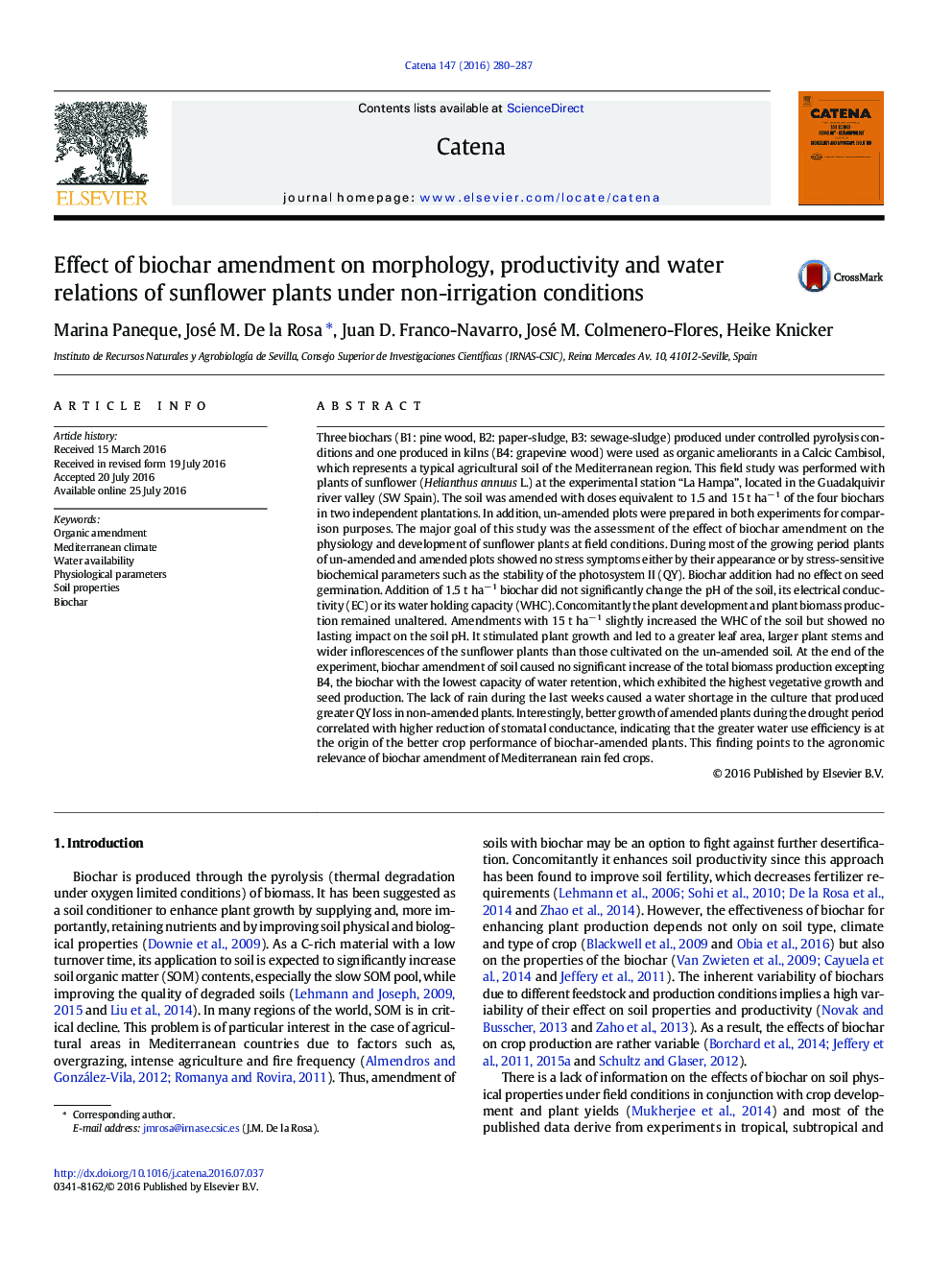 Three biochars (B1: pine wood, B2: paper-sludge, B3: sewage-sludge) produced under controlled pyrolysis conditions and one produced in kilns (B4: grapevine wood) were used as organic ameliorants in a Calcic Cambisol, which represents a typical agricultural soil of the Mediterranean region. This field study was performed with plants of sunflower (Helianthus annuus L.) at the experimental station “La Hampa”, located in the Guadalquivir river valley (SW Spain). The soil was amended with doses equivalent to 1.5 and 15Â tÂ haâÂ 1 of the four biochars in two independent plantations. In addition, un-amended plots were prepared in both experiments for comparison purposes. The major goal of this study was the assessment of the effect of biochar amendment on the physiology and development of sunflower plants at field conditions. During most of the growing period plants of un-amended and amended plots showed no stress symptoms either by their appearance or by stress-sensitive biochemical parameters such as the stability of the photosystem II (QY). Biochar addition had no effect on seed germination. Addition of 1.5Â tÂ haâÂ 1 biochar did not significantly change the pH of the soil, its electrical conductivity (EC) or its water holding capacity (WHC). Concomitantly the plant development and plant biomass production remained unaltered. Amendments with 15Â tÂ haâÂ 1 slightly increased the WHC of the soil but showed no lasting impact on the soil pH. It stimulated plant growth and led to a greater leaf area, larger plant stems and wider inflorescences of the sunflower plants than those cultivated on the un-amended soil. At the end of the experiment, biochar amendment of soil caused no significant increase of the total biomass production excepting B4, the biochar with the lowest capacity of water retention, which exhibited the highest vegetative growth and seed production. The lack of rain during the last weeks caused a water shortage in the culture that produced greater QY loss in non-amended plants. Interestingly, better growth of amended plants during the drought period correlated with higher reduction of stomatal conductance, indicating that the greater water use efficiency is at the origin of the better crop performance of biochar-amended plants. This finding points to the agronomic relevance of biochar amendment of Mediterranean rain fed crops.