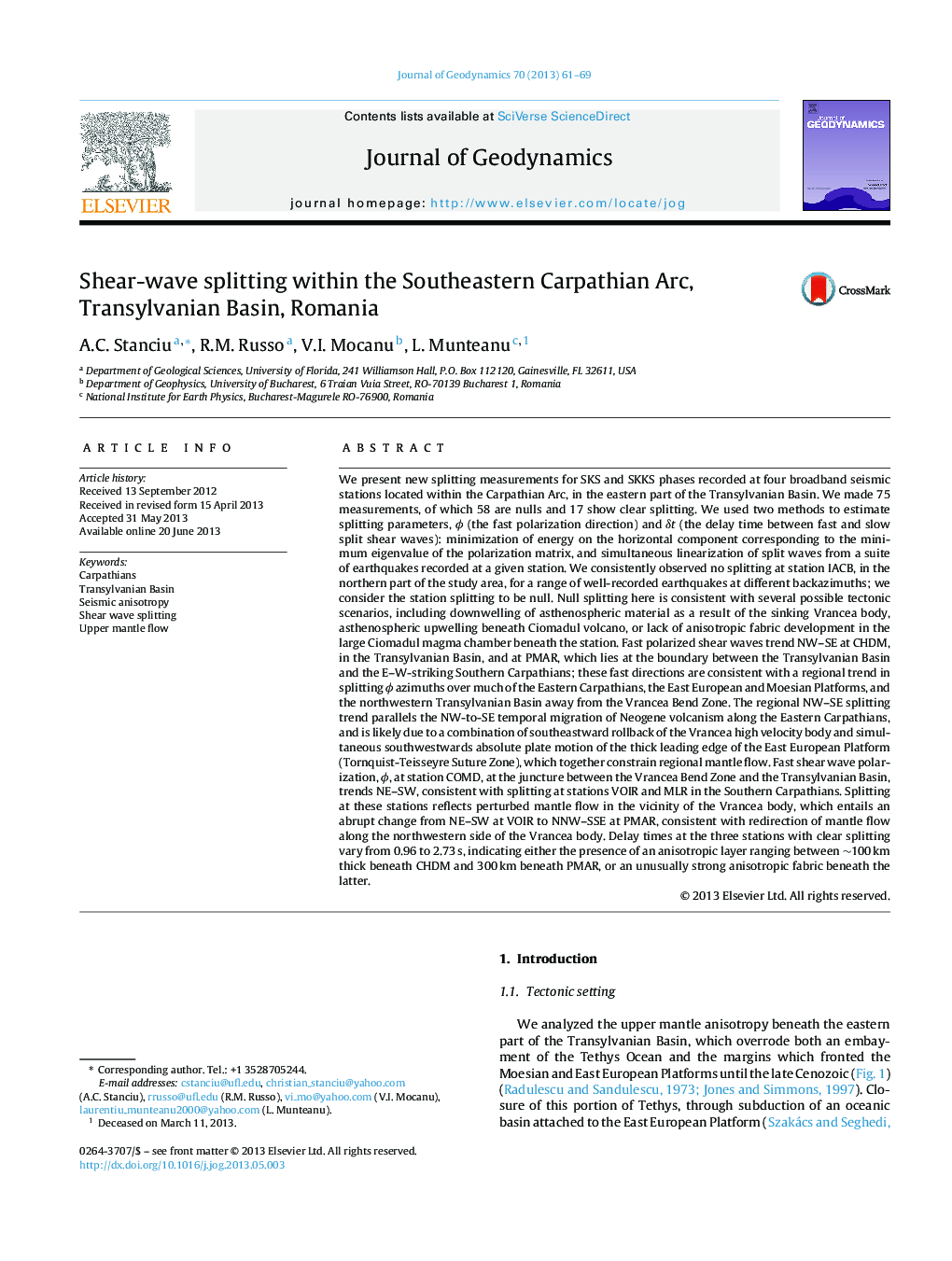 We present new splitting measurements for SKS and SKKS phases recorded at four broadband seismic stations located within the Carpathian Arc, in the eastern part of the Transylvanian Basin. We made 75 measurements, of which 58 are nulls and 17 show clear splitting. We used two methods to estimate splitting parameters, Ï (the fast polarization direction) and Î´t (the delay time between fast and slow split shear waves): minimization of energy on the horizontal component corresponding to the minimum eigenvalue of the polarization matrix, and simultaneous linearization of split waves from a suite of earthquakes recorded at a given station. We consistently observed no splitting at station IACB, in the northern part of the study area, for a range of well-recorded earthquakes at different backazimuths; we consider the station splitting to be null. Null splitting here is consistent with several possible tectonic scenarios, including downwelling of asthenospheric material as a result of the sinking Vrancea body, asthenospheric upwelling beneath Ciomadul volcano, or lack of anisotropic fabric development in the large Ciomadul magma chamber beneath the station. Fast polarized shear waves trend NW-SE at CHDM, in the Transylvanian Basin, and at PMAR, which lies at the boundary between the Transylvanian Basin and the E-W-striking Southern Carpathians; these fast directions are consistent with a regional trend in splitting Ï azimuths over much of the Eastern Carpathians, the East European and Moesian Platforms, and the northwestern Transylvanian Basin away from the Vrancea Bend Zone. The regional NW-SE splitting trend parallels the NW-to-SE temporal migration of Neogene volcanism along the Eastern Carpathians, and is likely due to a combination of southeastward rollback of the Vrancea high velocity body and simultaneous southwestwards absolute plate motion of the thick leading edge of the East European Platform (Tornquist-Teisseyre Suture Zone), which together constrain regional mantle flow. Fast shear wave polarization, Ï, at station COMD, at the juncture between the Vrancea Bend Zone and the Transylvanian Basin, trends NE-SW, consistent with splitting at stations VOIR and MLR in the Southern Carpathians. Splitting at these stations reflects perturbed mantle flow in the vicinity of the Vrancea body, which entails an abrupt change from NE-SW at VOIR to NNW-SSE at PMAR, consistent with redirection of mantle flow along the northwestern side of the Vrancea body. Delay times at the three stations with clear splitting vary from 0.96 to 2.73Â s, indicating either the presence of an anisotropic layer ranging between â¼100Â km thick beneath CHDM and 300Â km beneath PMAR, or an unusually strong anisotropic fabric beneath the latter.