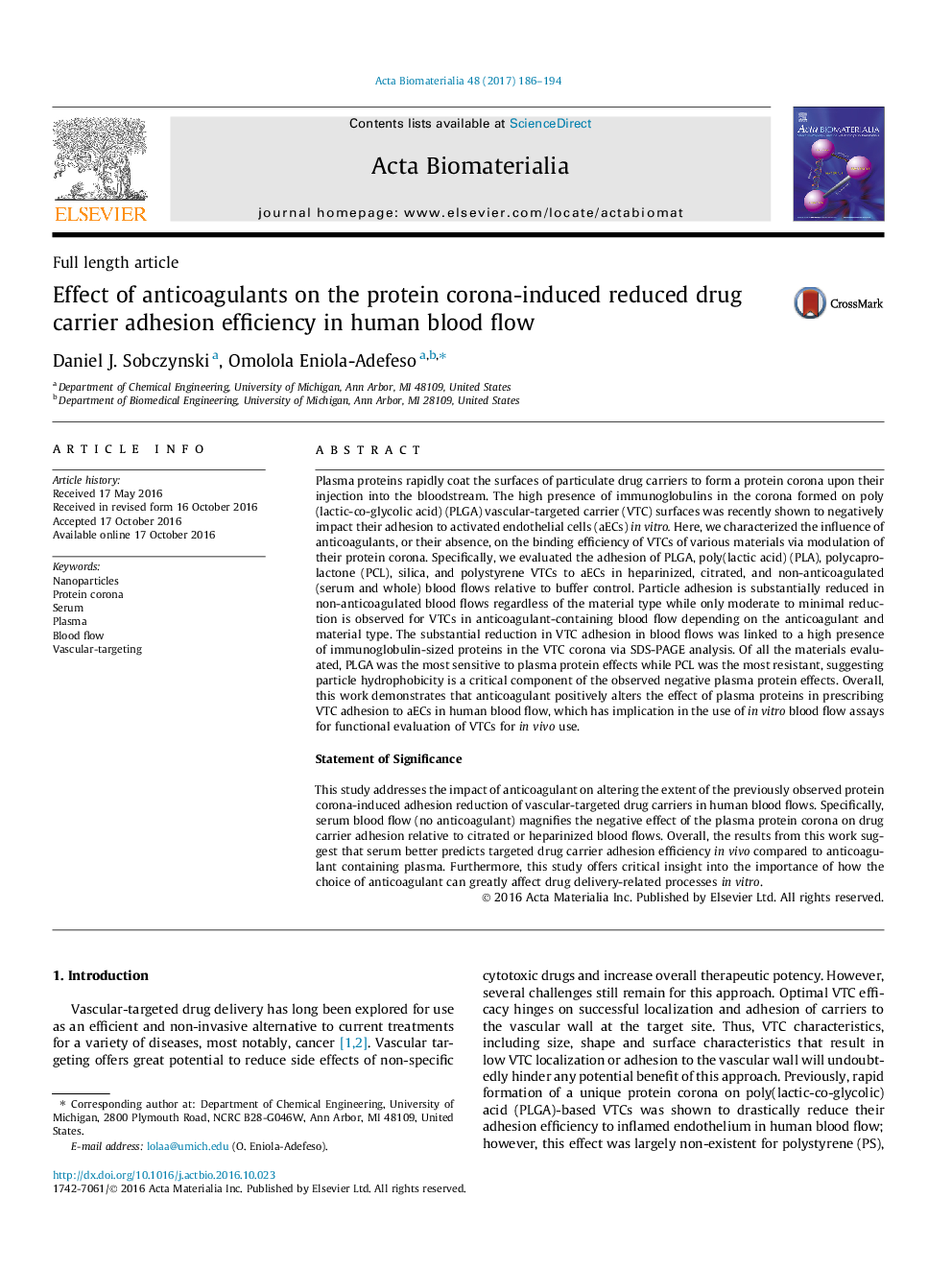 Plasma proteins rapidly coat the surfaces of particulate drug carriers to form a protein corona upon their injection into the bloodstream. The high presence of immunoglobulins in the corona formed on poly(lactic-co-glycolic acid) (PLGA) vascular-targeted carrier (VTC) surfaces was recently shown to negatively impact their adhesion to activated endothelial cells (aECs) in vitro. Here, we characterized the influence of anticoagulants, or their absence, on the binding efficiency of VTCs of various materials via modulation of their protein corona. Specifically, we evaluated the adhesion of PLGA, poly(lactic acid) (PLA), polycaprolactone (PCL), silica, and polystyrene VTCs to aECs in heparinized, citrated, and non-anticoagulated (serum and whole) blood flows relative to buffer control. Particle adhesion is substantially reduced in non-anticoagulated blood flows regardless of the material type while only moderate to minimal reduction is observed for VTCs in anticoagulant-containing blood flow depending on the anticoagulant and material type. The substantial reduction in VTC adhesion in blood flows was linked to a high presence of immunoglobulin-sized proteins in the VTC corona via SDS-PAGE analysis. Of all the materials evaluated, PLGA was the most sensitive to plasma protein effects while PCL was the most resistant, suggesting particle hydrophobicity is a critical component of the observed negative plasma protein effects. Overall, this work demonstrates that anticoagulant positively alters the effect of plasma proteins in prescribing VTC adhesion to aECs in human blood flow, which has implication in the use of in vitro blood flow assays for functional evaluation of VTCs for in vivo use.Statement of SignificanceThis study addresses the impact of anticoagulant on altering the extent of the previously observed protein corona-induced adhesion reduction of vascular-targeted drug carriers in human blood flows. Specifically, serum blood flow (no anticoagulant) magnifies the negative effect of the plasma protein corona on drug carrier adhesion relative to citrated or heparinized blood flows. Overall, the results from this work suggest that serum better predicts targeted drug carrier adhesion efficiency in vivo compared to anticoagulant containing plasma. Furthermore, this study offers critical insight into the importance of how the choice of anticoagulant can greatly affect drug delivery-related processes in vitro.