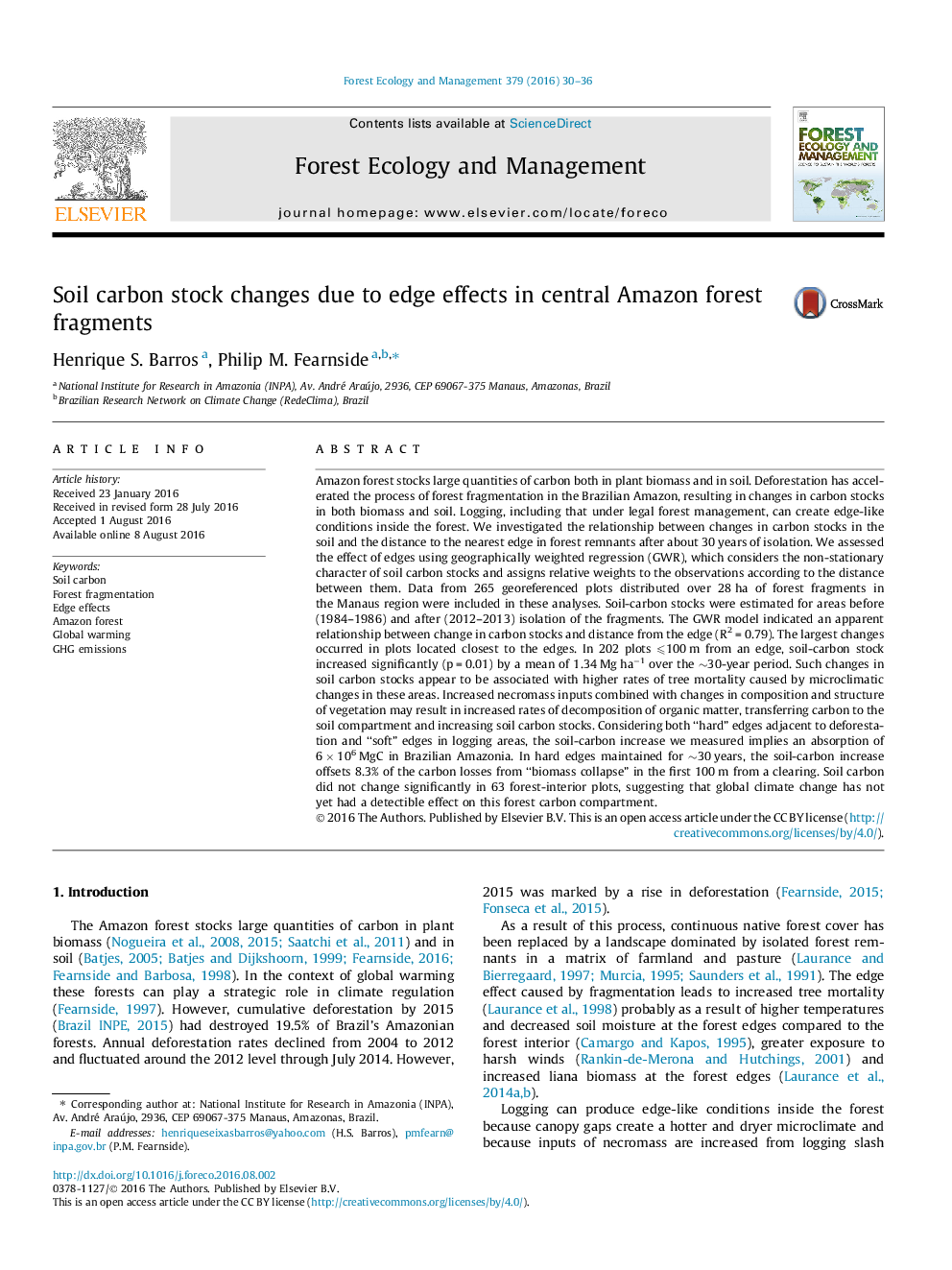 Amazon forest stocks large quantities of carbon both in plant biomass and in soil. Deforestation has accelerated the process of forest fragmentation in the Brazilian Amazon, resulting in changes in carbon stocks in both biomass and soil. Logging, including that under legal forest management, can create edge-like conditions inside the forest. We investigated the relationship between changes in carbon stocks in the soil and the distance to the nearest edge in forest remnants after about 30Â years of isolation. We assessed the effect of edges using geographically weighted regression (GWR), which considers the non-stationary character of soil carbon stocks and assigns relative weights to the observations according to the distance between them. Data from 265 georeferenced plots distributed over 28Â ha of forest fragments in the Manaus region were included in these analyses. Soil-carbon stocks were estimated for areas before (1984-1986) and after (2012-2013) isolation of the fragments. The GWR model indicated an apparent relationship between change in carbon stocks and distance from the edge (R2Â =Â 0.79). The largest changes occurred in plots located closest to the edges. In 202 plots â©½100Â m from an edge, soil-carbon stock increased significantly (pÂ =Â 0.01) by a mean of 1.34Â MgÂ haâ1 over the â¼30-year period. Such changes in soil carbon stocks appear to be associated with higher rates of tree mortality caused by microclimatic changes in these areas. Increased necromass inputs combined with changes in composition and structure of vegetation may result in increased rates of decomposition of organic matter, transferring carbon to the soil compartment and increasing soil carbon stocks. Considering both “hard” edges adjacent to deforestation and “soft” edges in logging areas, the soil-carbon increase we measured implies an absorption of 6Â ÃÂ 106Â MgC in Brazilian Amazonia. In hard edges maintained for â¼30Â years, the soil-carbon increase offsets 8.3% of the carbon losses from “biomass collapse” in the first 100Â m from a clearing. Soil carbon did not change significantly in 63 forest-interior plots, suggesting that global climate change has not yet had a detectible effect on this forest carbon compartment.

A forest edge at the Biological Dynamics of Forest Fragments Project near Manaus, Brazil. Dead trees and reduced biomass are evident. Soil carbon dynamics in forest near these edges is affected by hotter and dryer microclimate, increased input of necromass and increased decomposition rates. Over a 30-year period, soil carbon gain counteracts 8.3% of above-ground carbon loss from “biomass collapse”. Deforestation patterns in Amazonia create vast areas of forest edges, but carbon-stock changes from edge effects are frequently omitted from calculations of greenhouse gas emissions from deforestation and degradation in tropical forests.235