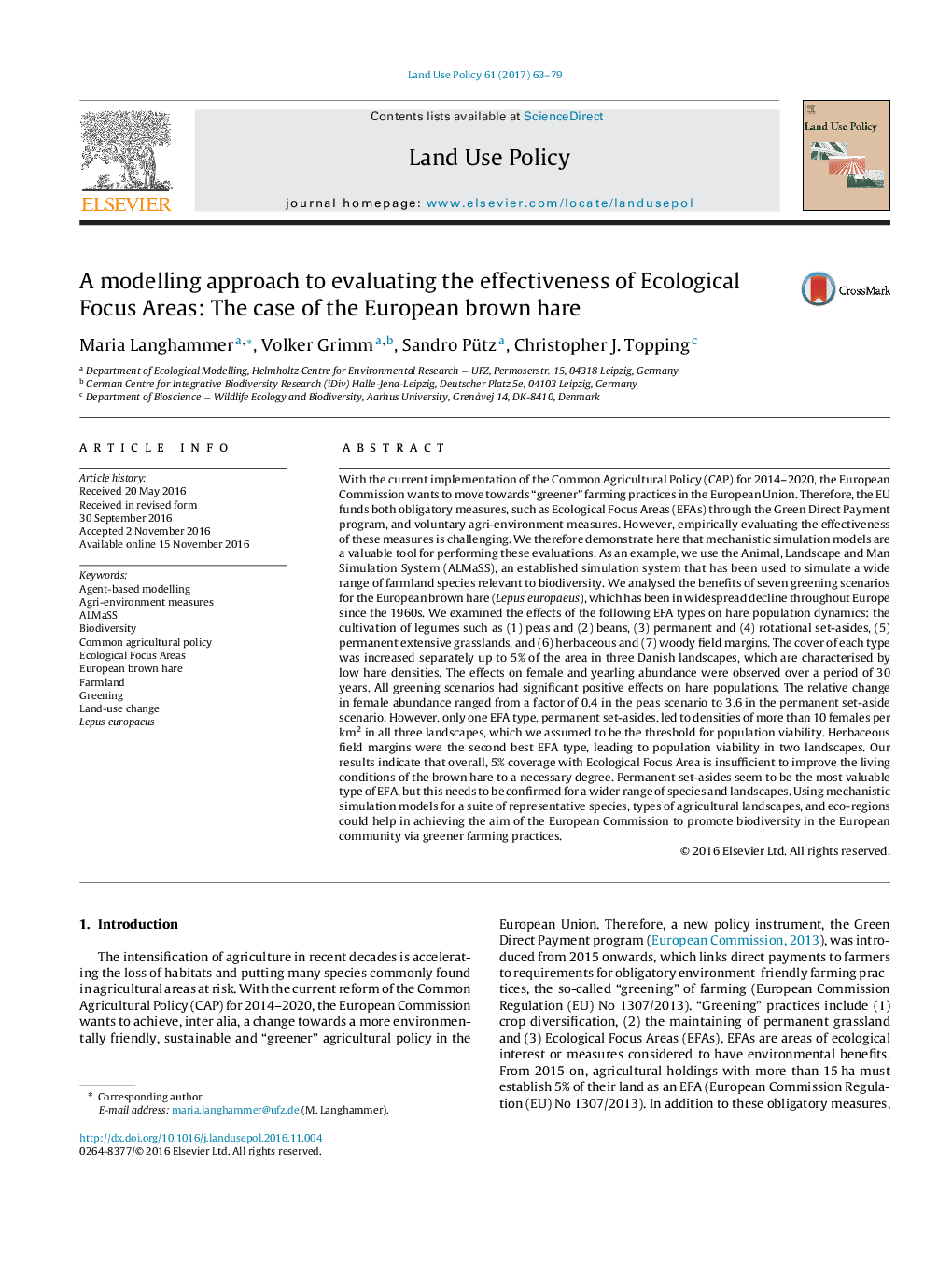 With the current implementation of the Common Agricultural Policy (CAP) for 2014-2020, the European Commission wants to move towards “greener” farming practices in the European Union. Therefore, the EU funds both obligatory measures, such as Ecological Focus Areas (EFAs) through the Green Direct Payment program, and voluntary agri-environment measures. However, empirically evaluating the effectiveness of these measures is challenging. We therefore demonstrate here that mechanistic simulation models are a valuable tool for performing these evaluations. As an example, we use the Animal, Landscape and Man Simulation System (ALMaSS), an established simulation system that has been used to simulate a wide range of farmland species relevant to biodiversity. We analysed the benefits of seven greening scenarios for the European brown hare (Lepus europaeus), which has been in widespread decline throughout Europe since the 1960s. We examined the effects of the following EFA types on hare population dynamics: the cultivation of legumes such as (1) peas and (2) beans, (3) permanent and (4) rotational set-asides, (5) permanent extensive grasslands, and (6) herbaceous and (7) woody field margins. The cover of each type was increased separately up to 5% of the area in three Danish landscapes, which are characterised by low hare densities. The effects on female and yearling abundance were observed over a period of 30 years. All greening scenarios had significant positive effects on hare populations. The relative change in female abundance ranged from a factor of 0.4 in the peas scenario to 3.6 in the permanent set-aside scenario. However, only one EFA type, permanent set-asides, led to densities of more than 10 females per km2 in all three landscapes, which we assumed to be the threshold for population viability. Herbaceous field margins were the second best EFA type, leading to population viability in two landscapes. Our results indicate that overall, 5% coverage with Ecological Focus Area is insufficient to improve the living conditions of the brown hare to a necessary degree. Permanent set-asides seem to be the most valuable type of EFA, but this needs to be confirmed for a wider range of species and landscapes. Using mechanistic simulation models for a suite of representative species, types of agricultural landscapes, and eco-regions could help in achieving the aim of the European Commission to promote biodiversity in the European community via greener farming practices.