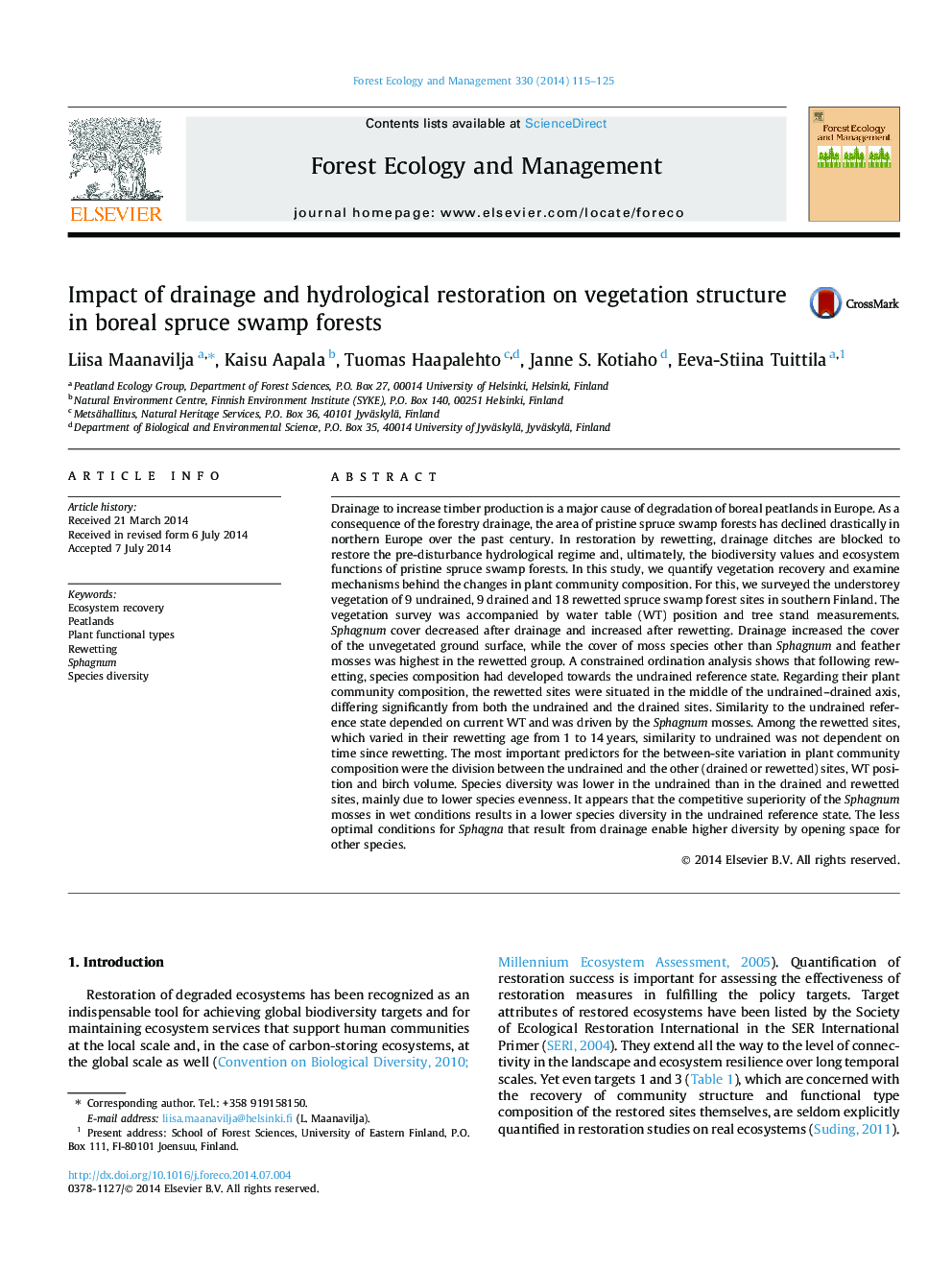 چکیده انگلیسی
Drainage to increase timber production is a major cause of degradation of boreal peatlands in Europe. As a consequence of the forestry drainage, the area of pristine spruce swamp forests has declined drastically in northern Europe over the past century. In restoration by rewetting, drainage ditches are blocked to restore the pre-disturbance hydrological regime and, ultimately, the biodiversity values and ecosystem functions of pristine spruce swamp forests. In this study, we quantify vegetation recovery and examine mechanisms behind the changes in plant community composition. For this, we surveyed the understorey vegetation of 9 undrained, 9 drained and 18 rewetted spruce swamp forest sites in southern Finland. The vegetation survey was accompanied by water table (WT) position and tree stand measurements. Sphagnum cover decreased after drainage and increased after rewetting. Drainage increased the cover of the unvegetated ground surface, while the cover of moss species other than Sphagnum and feather mosses was highest in the rewetted group. A constrained ordination analysis shows that following rewetting, species composition had developed towards the undrained reference state. Regarding their plant community composition, the rewetted sites were situated in the middle of the undrained-drained axis, differing significantly from both the undrained and the drained sites. Similarity to the undrained reference state depended on current WT and was driven by the Sphagnum mosses. Among the rewetted sites, which varied in their rewetting age from 1 to 14Â years, similarity to undrained was not dependent on time since rewetting. The most important predictors for the between-site variation in plant community composition were the division between the undrained and the other (drained or rewetted) sites, WT position and birch volume. Species diversity was lower in the undrained than in the drained and rewetted sites, mainly due to lower species evenness. It appears that the competitive superiority of the Sphagnum mosses in wet conditions results in a lower species diversity in the undrained reference state. The less optimal conditions for Sphagna that result from drainage enable higher diversity by opening space for other species.
ناشر
Database: Elsevier - ScienceDirect (ساینس دایرکت)
Journal: Forest Ecology and Management - Volume 330, 15 October 2014, Pages 115-125
نویسندگان
Liisa Maanavilja, Kaisu Aapala, Tuomas Haapalehto, Janne S. Kotiaho, Eeva-Stiina Tuittila,
دانلود مقاله + سفارش ترجمه
دانلود مقاله ISI انگلیسی
رایگان برای ایرانیان
سفارش ترجمه تخصصی
با تضمین قیمت و کیفیت
منتشر شده در