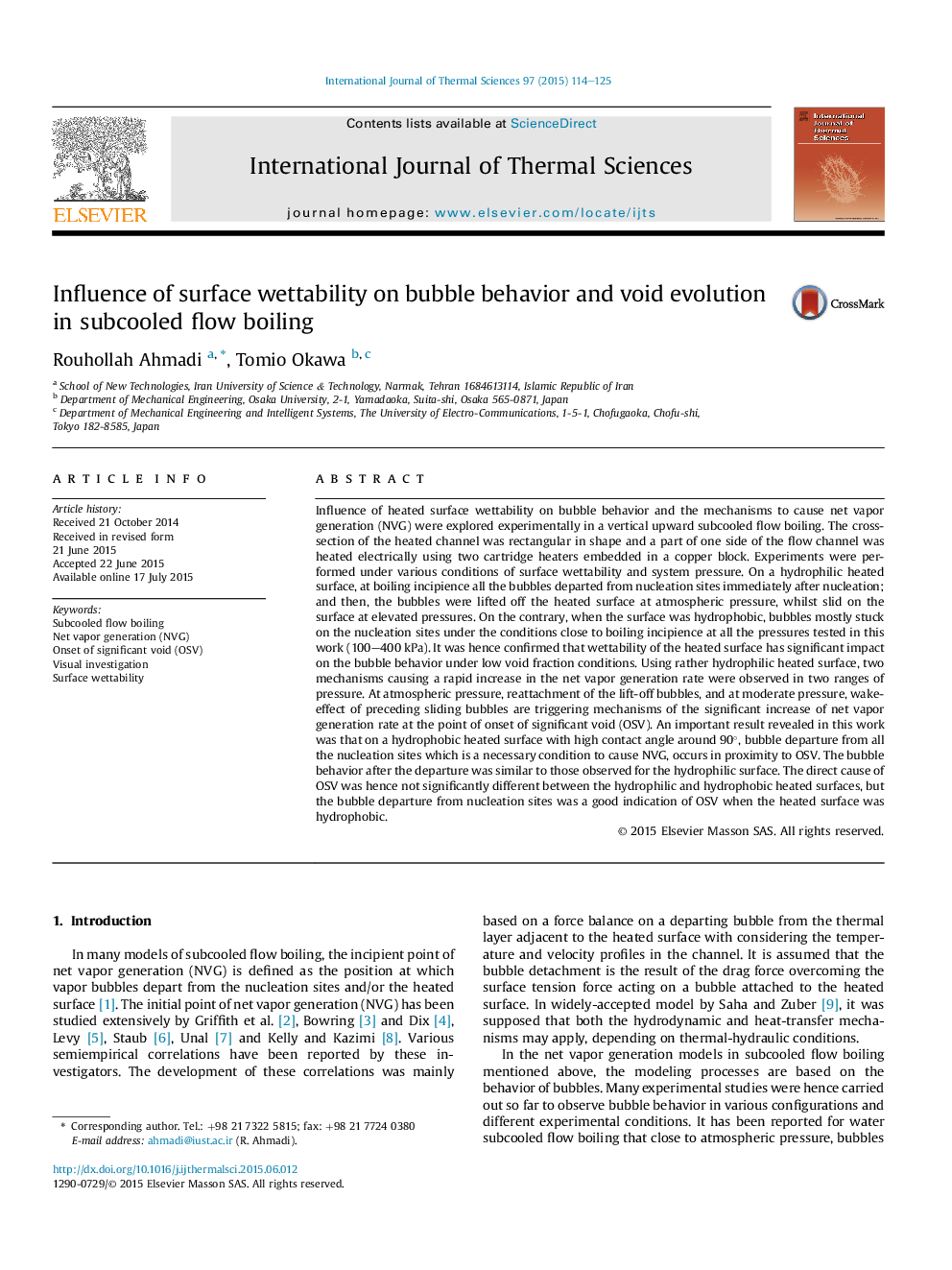 چکیده انگلیسی
Influence of heated surface wettability on bubble behavior and the mechanisms to cause net vapor generation (NVG) were explored experimentally in a vertical upward subcooled flow boiling. The cross-section of the heated channel was rectangular in shape and a part of one side of the flow channel was heated electrically using two cartridge heaters embedded in a copper block. Experiments were performed under various conditions of surface wettability and system pressure. On a hydrophilic heated surface, at boiling incipience all the bubbles departed from nucleation sites immediately after nucleation; and then, the bubbles were lifted off the heated surface at atmospheric pressure, whilst slid on the surface at elevated pressures. On the contrary, when the surface was hydrophobic, bubbles mostly stuck on the nucleation sites under the conditions close to boiling incipience at all the pressures tested in this work (100-400Â kPa). It was hence confirmed that wettability of the heated surface has significant impact on the bubble behavior under low void fraction conditions. Using rather hydrophilic heated surface, two mechanisms causing a rapid increase in the net vapor generation rate were observed in two ranges of pressure. At atmospheric pressure, reattachment of the lift-off bubbles, and at moderate pressure, wake-effect of preceding sliding bubbles are triggering mechanisms of the significant increase of net vapor generation rate at the point of onset of significant void (OSV). An important result revealed in this work was that on a hydrophobic heated surface with high contact angle around 90Â°, bubble departure from all the nucleation sites which is a necessary condition to cause NVG, occurs in proximity to OSV. The bubble behavior after the departure was similar to those observed for the hydrophilic surface. The direct cause of OSV was hence not significantly different between the hydrophilic and hydrophobic heated surfaces, but the bubble departure from nucleation sites was a good indication of OSV when the heated surface was hydrophobic.
ناشر
Database: Elsevier - ScienceDirect (ساینس دایرکت)
Journal: International Journal of Thermal Sciences - Volume 97, November 2015, Pages 114-125
نویسندگان
Rouhollah Ahmadi, Tomio Okawa,
دانلود مقاله + سفارش ترجمه
دانلود مقاله ISI انگلیسی
رایگان برای ایرانیان
سفارش ترجمه تخصصی
با تضمین قیمت و کیفیت
منتشر شده در