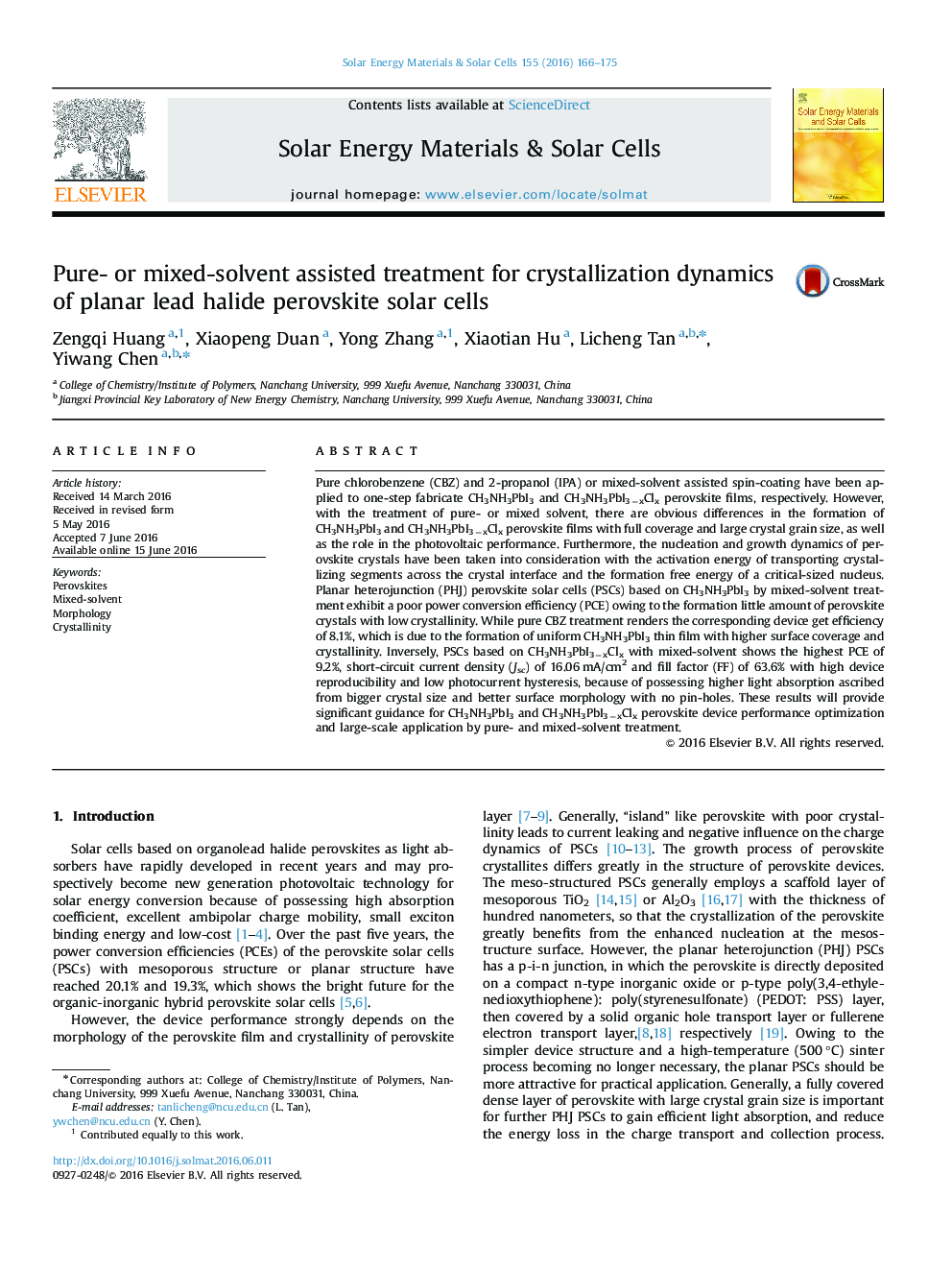 • CH3NH3PbI3 and CH3NH3PbI3−xClx perovskites are treated by pure- or mixed solvent.
• They exhibit obvious differences in crystal nucleation.
• Perovskites display distinct effect in morphology and photovoltaics.
• The nucleation and growth dynamics of perovskite crystals have been recommended.

Pure chlorobenzene (CBZ) and 2-propanol (IPA) or mixed-solvent assisted spin-coating have been applied to one-step fabricate CH3NH3PbI3 and CH3NH3PbI3−xClx perovskite films, respectively. However, with the treatment of pure- or mixed solvent, there are obvious differences in the formation of CH3NH3PbI3 and CH3NH3PbI3−xClx perovskite films with full coverage and large crystal grain size, as well as the role in the photovoltaic performance. Furthermore, the nucleation and growth dynamics of perovskite crystals have been taken into consideration with the activation energy of transporting crystallizing segments across the crystal interface and the formation free energy of a critical-sized nucleus. Planar heterojunction (PHJ) perovskite solar cells (PSCs) based on CH3NH3PbI3 by mixed-solvent treatment exhibit a poor power conversion efficiency (PCE) owing to the formation little amount of perovskite crystals with low crystallinity. While pure CBZ treatment renders the corresponding device get efficiency of 8.1%, which is due to the formation of uniform CH3NH3PbI3 thin film with higher surface coverage and crystallinity. Inversely, PSCs based on CH3NH3PbI3−xClx with mixed-solvent shows the highest PCE of 9.2%, short-circuit current density (Jsc) of 16.06 mA/cm2 and fill factor (FF) of 63.6% with high device reproducibility and low photocurrent hysteresis, because of possessing higher light absorption ascribed from bigger crystal size and better surface morphology with no pin-holes. These results will provide significant guidance for CH3NH3PbI3 and CH3NH3PbI3−xClx perovskite device performance optimization and large-scale application by pure- and mixed-solvent treatment.