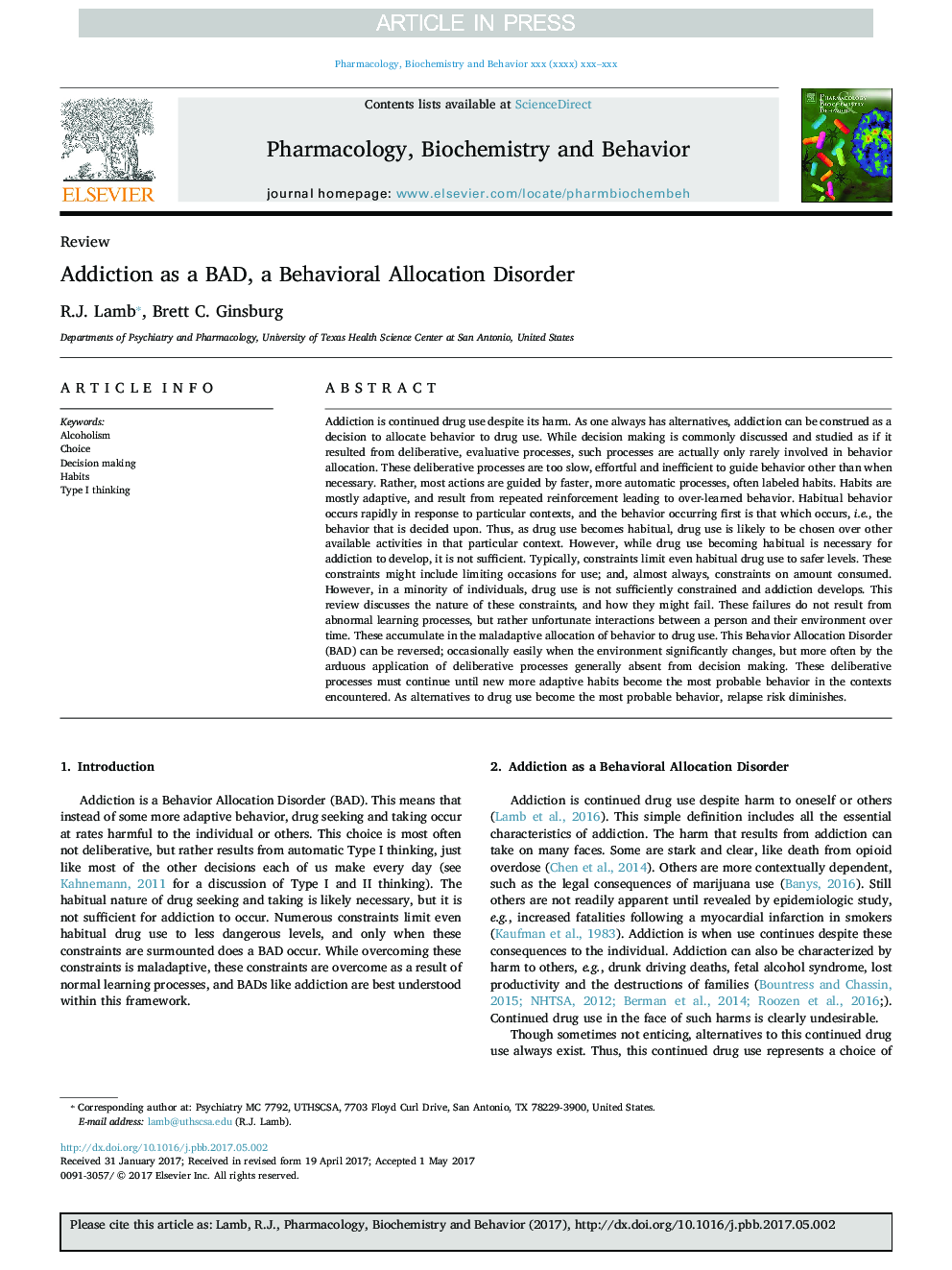 چکیده انگلیسی
Addiction is continued drug use despite its harm. As one always has alternatives, addiction can be construed as a decision to allocate behavior to drug use. While decision making is commonly discussed and studied as if it resulted from deliberative, evaluative processes, such processes are actually only rarely involved in behavior allocation. These deliberative processes are too slow, effortful and inefficient to guide behavior other than when necessary. Rather, most actions are guided by faster, more automatic processes, often labeled habits. Habits are mostly adaptive, and result from repeated reinforcement leading to over-learned behavior. Habitual behavior occurs rapidly in response to particular contexts, and the behavior occurring first is that which occurs, i.e., the behavior that is decided upon. Thus, as drug use becomes habitual, drug use is likely to be chosen over other available activities in that particular context. However, while drug use becoming habitual is necessary for addiction to develop, it is not sufficient. Typically, constraints limit even habitual drug use to safer levels. These constraints might include limiting occasions for use; and, almost always, constraints on amount consumed. However, in a minority of individuals, drug use is not sufficiently constrained and addiction develops. This review discusses the nature of these constraints, and how they might fail. These failures do not result from abnormal learning processes, but rather unfortunate interactions between a person and their environment over time. These accumulate in the maladaptive allocation of behavior to drug use. This Behavior Allocation Disorder (BAD) can be reversed; occasionally easily when the environment significantly changes, but more often by the arduous application of deliberative processes generally absent from decision making. These deliberative processes must continue until new more adaptive habits become the most probable behavior in the contexts encountered. As alternatives to drug use become the most probable behavior, relapse risk diminishes.
ناشر
Database: Elsevier - ScienceDirect (ساینس دایرکت)
Journal: Pharmacology Biochemistry and Behavior - Volume 164, January 2018, Pages 62-70
نویسندگان
R.J. Lamb,Brett C. Ginsburg,
دانلود مقاله + سفارش ترجمه
دانلود مقاله ISI انگلیسی
رایگان برای ایرانیان
سفارش ترجمه تخصصی
با تضمین قیمت و کیفیت
منتشر شده در