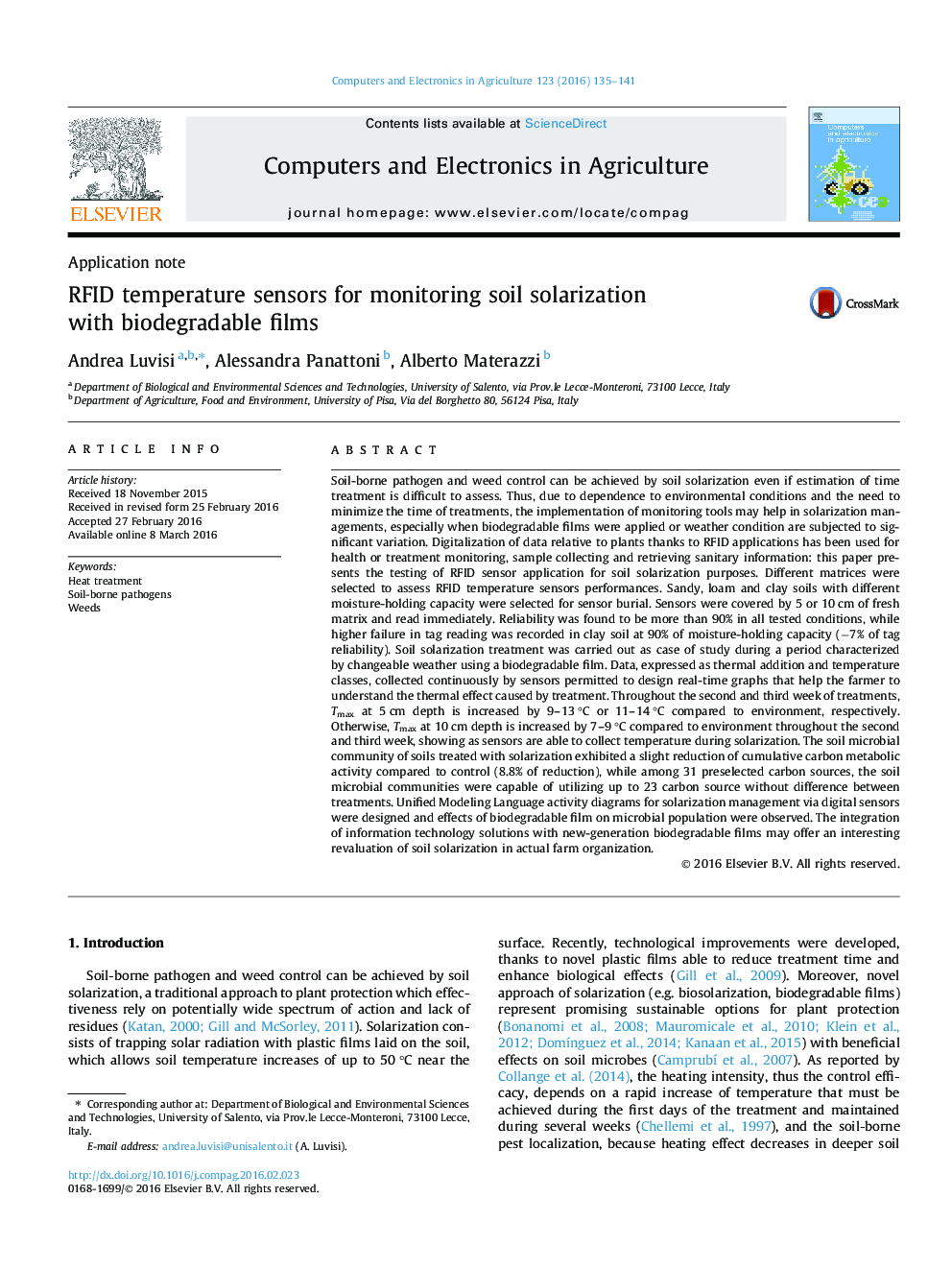 • RFID sensors are effective for real-time temperature monitoring during solarization.
• Lesions of biodegradable film can be highlighted by RFID temperature assessment.
• Easy-to-use monitoring tools help the farmer to understand the thermal effect.

Soil-borne pathogen and weed control can be achieved by soil solarization even if estimation of time treatment is difficult to assess. Thus, due to dependence to environmental conditions and the need to minimize the time of treatments, the implementation of monitoring tools may help in solarization managements, especially when biodegradable films were applied or weather condition are subjected to significant variation. Digitalization of data relative to plants thanks to RFID applications has been used for health or treatment monitoring, sample collecting and retrieving sanitary information: this paper presents the testing of RFID sensor application for soil solarization purposes. Different matrices were selected to assess RFID temperature sensors performances. Sandy, loam and clay soils with different moisture-holding capacity were selected for sensor burial. Sensors were covered by 5 or 10 cm of fresh matrix and read immediately. Reliability was found to be more than 90% in all tested conditions, while higher failure in tag reading was recorded in clay soil at 90% of moisture-holding capacity (−7% of tag reliability). Soil solarization treatment was carried out as case of study during a period characterized by changeable weather using a biodegradable film. Data, expressed as thermal addition and temperature classes, collected continuously by sensors permitted to design real-time graphs that help the farmer to understand the thermal effect caused by treatment. Throughout the second and third week of treatments, Tmax at 5 cm depth is increased by 9–13 °C or 11–14 °C compared to environment, respectively. Otherwise, Tmax at 10 cm depth is increased by 7–9 °C compared to environment throughout the second and third week, showing as sensors are able to collect temperature during solarization. The soil microbial community of soils treated with solarization exhibited a slight reduction of cumulative carbon metabolic activity compared to control (8.8% of reduction), while among 31 preselected carbon sources, the soil microbial communities were capable of utilizing up to 23 carbon source without difference between treatments. Unified Modeling Language activity diagrams for solarization management via digital sensors were designed and effects of biodegradable film on microbial population were observed. The integration of information technology solutions with new-generation biodegradable films may offer an interesting revaluation of soil solarization in actual farm organization.