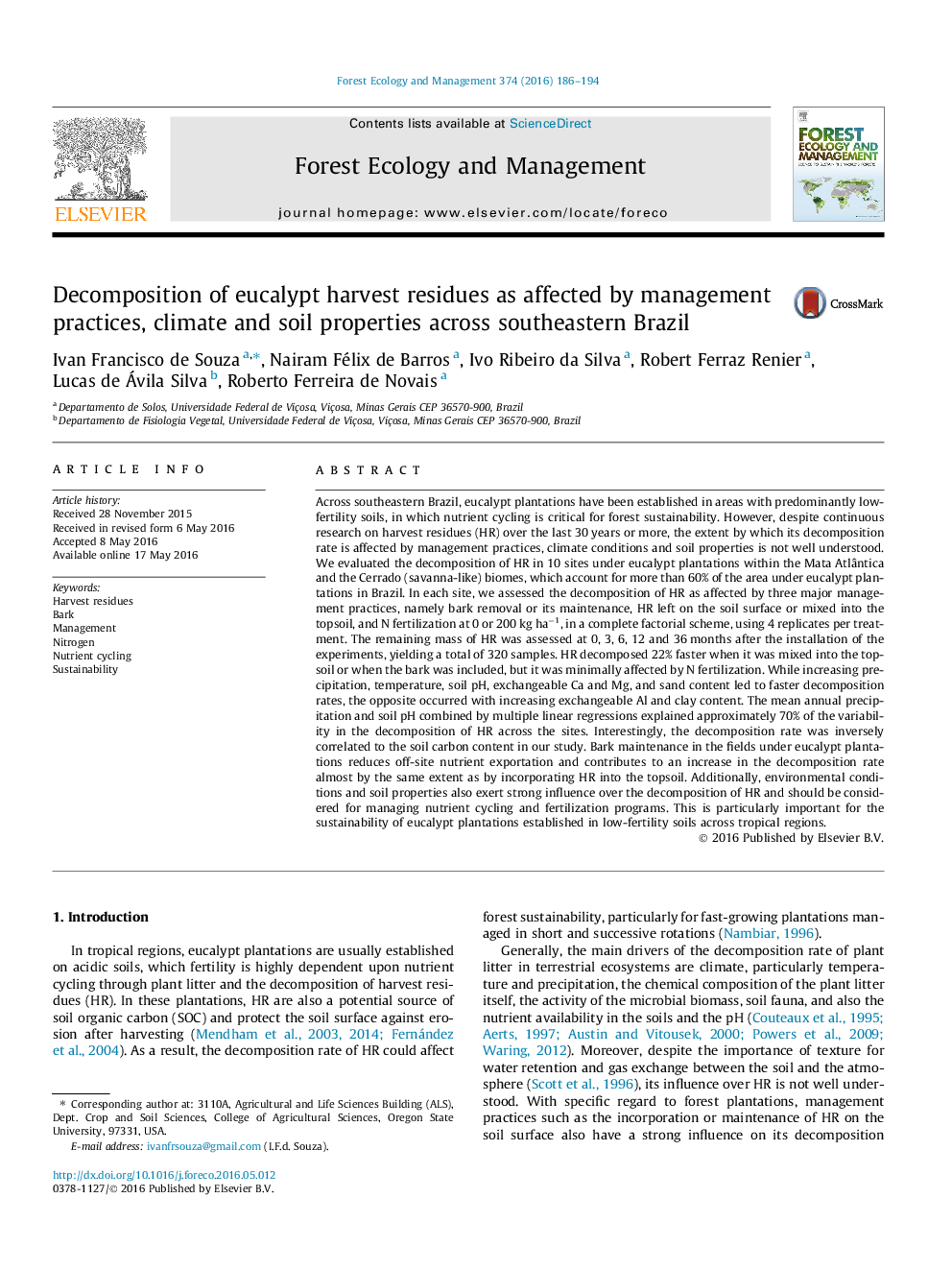 Across southeastern Brazil, eucalypt plantations have been established in areas with predominantly low-fertility soils, in which nutrient cycling is critical for forest sustainability. However, despite continuous research on harvest residues (HR) over the last 30 years or more, the extent by which its decomposition rate is affected by management practices, climate conditions and soil properties is not well understood. We evaluated the decomposition of HR in 10 sites under eucalypt plantations within the Mata Atlântica and the Cerrado (savanna-like) biomes, which account for more than 60% of the area under eucalypt plantations in Brazil. In each site, we assessed the decomposition of HR as affected by three major management practices, namely bark removal or its maintenance, HR left on the soil surface or mixed into the topsoil, and N fertilization at 0 or 200 kg ha−1, in a complete factorial scheme, using 4 replicates per treatment. The remaining mass of HR was assessed at 0, 3, 6, 12 and 36 months after the installation of the experiments, yielding a total of 320 samples. HR decomposed 22% faster when it was mixed into the topsoil or when the bark was included, but it was minimally affected by N fertilization. While increasing precipitation, temperature, soil pH, exchangeable Ca and Mg, and sand content led to faster decomposition rates, the opposite occurred with increasing exchangeable Al and clay content. The mean annual precipitation and soil pH combined by multiple linear regressions explained approximately 70% of the variability in the decomposition of HR across the sites. Interestingly, the decomposition rate was inversely correlated to the soil carbon content in our study. Bark maintenance in the fields under eucalypt plantations reduces off-site nutrient exportation and contributes to an increase in the decomposition rate almost by the same extent as by incorporating HR into the topsoil. Additionally, environmental conditions and soil properties also exert strong influence over the decomposition of HR and should be considered for managing nutrient cycling and fertilization programs. This is particularly important for the sustainability of eucalypt plantations established in low-fertility soils across tropical regions.