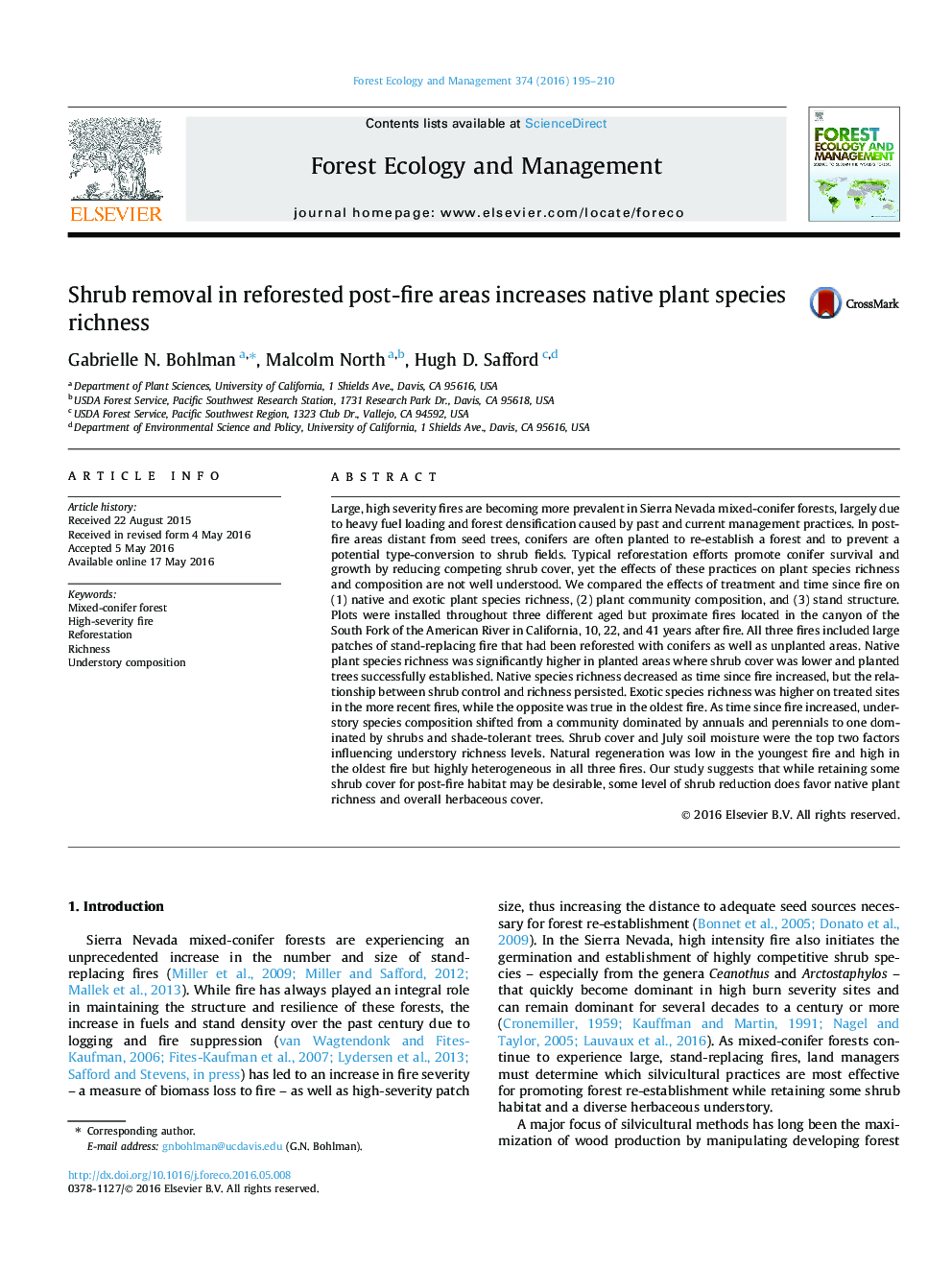 • We studied high-severity burns in 10, 22, and 41-year old forest fires in the Sierra Nevada.
• We assessed impacts of post-fire reforestation and shrub control on understory vegetation.
• Plant species richness was higher in actively reforested areas than in untreated areas.
• Plant species richness decreased as time since fire increased.
• Shrub cover and soil moisture were associated with herbaceous richness patterns.

Large, high severity fires are becoming more prevalent in Sierra Nevada mixed-conifer forests, largely due to heavy fuel loading and forest densification caused by past and current management practices. In post-fire areas distant from seed trees, conifers are often planted to re-establish a forest and to prevent a potential type-conversion to shrub fields. Typical reforestation efforts promote conifer survival and growth by reducing competing shrub cover, yet the effects of these practices on plant species richness and composition are not well understood. We compared the effects of treatment and time since fire on (1) native and exotic plant species richness, (2) plant community composition, and (3) stand structure. Plots were installed throughout three different aged but proximate fires located in the canyon of the South Fork of the American River in California, 10, 22, and 41 years after fire. All three fires included large patches of stand-replacing fire that had been reforested with conifers as well as unplanted areas. Native plant species richness was significantly higher in planted areas where shrub cover was lower and planted trees successfully established. Native species richness decreased as time since fire increased, but the relationship between shrub control and richness persisted. Exotic species richness was higher on treated sites in the more recent fires, while the opposite was true in the oldest fire. As time since fire increased, understory species composition shifted from a community dominated by annuals and perennials to one dominated by shrubs and shade-tolerant trees. Shrub cover and July soil moisture were the top two factors influencing understory richness levels. Natural regeneration was low in the youngest fire and high in the oldest fire but highly heterogeneous in all three fires. Our study suggests that while retaining some shrub cover for post-fire habitat may be desirable, some level of shrub reduction does favor native plant richness and overall herbaceous cover.