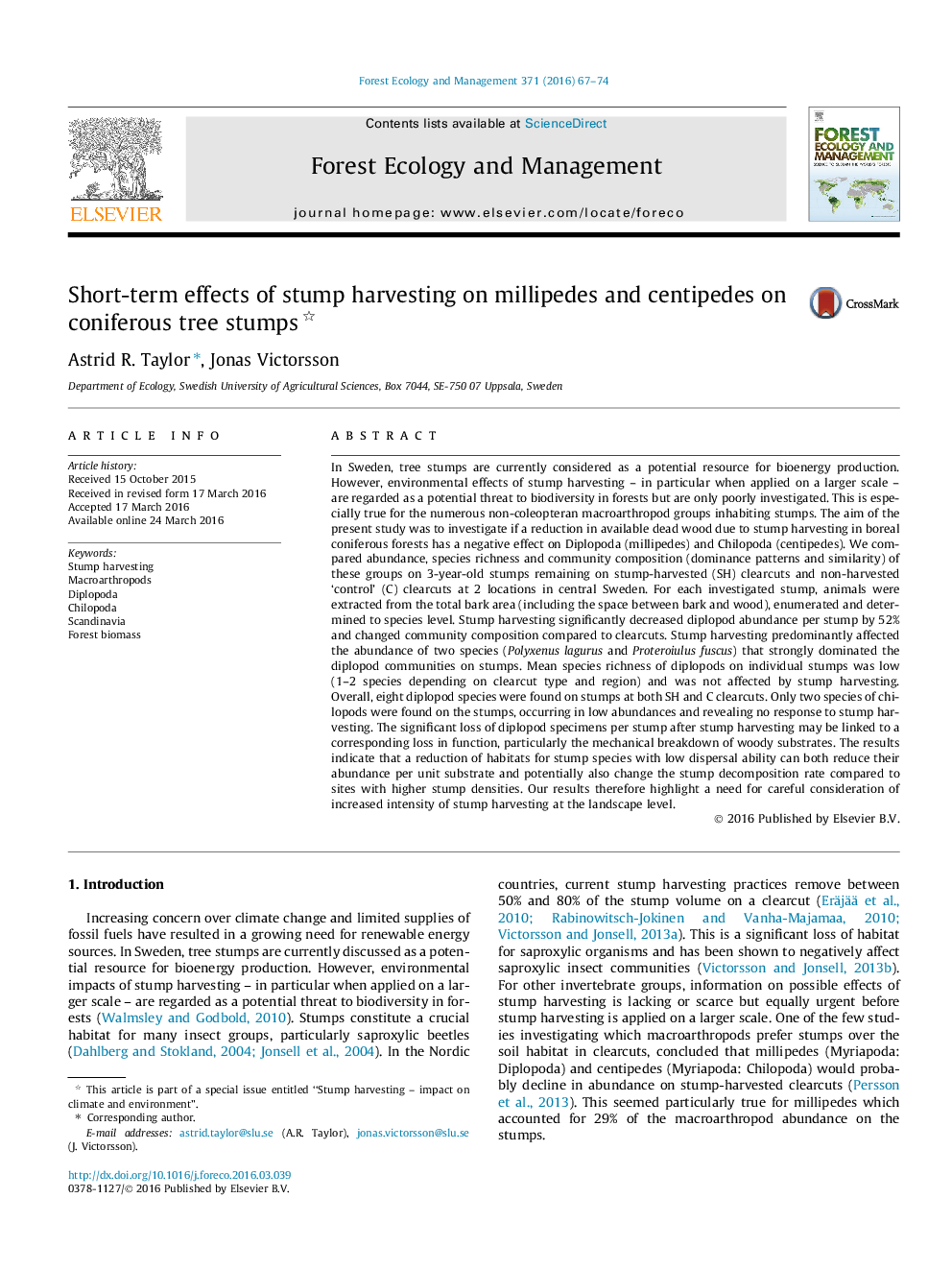 • We assessed stump harvesting (SH) effects on diplopods on young clearcut stumps.
• Diplopod abundance per stump decreased by about 50% due to SH.
• Stumps were dominated by two diplopod species that reacted sensitive to SH.
• Average species richness of diplopods on stumps was not affected by SH.
• Careful consideration of the intensity of SH at the landscape level is needed.

In Sweden, tree stumps are currently considered as a potential resource for bioenergy production. However, environmental effects of stump harvesting – in particular when applied on a larger scale – are regarded as a potential threat to biodiversity in forests but are only poorly investigated. This is especially true for the numerous non-coleopteran macroarthropod groups inhabiting stumps. The aim of the present study was to investigate if a reduction in available dead wood due to stump harvesting in boreal coniferous forests has a negative effect on Diplopoda (millipedes) and Chilopoda (centipedes). We compared abundance, species richness and community composition (dominance patterns and similarity) of these groups on 3-year-old stumps remaining on stump-harvested (SH) clearcuts and non-harvested ‘control’ (C) clearcuts at 2 locations in central Sweden. For each investigated stump, animals were extracted from the total bark area (including the space between bark and wood), enumerated and determined to species level. Stump harvesting significantly decreased diplopod abundance per stump by 52% and changed community composition compared to clearcuts. Stump harvesting predominantly affected the abundance of two species (Polyxenus lagurus and Proteroiulus fuscus) that strongly dominated the diplopod communities on stumps. Mean species richness of diplopods on individual stumps was low (1–2 species depending on clearcut type and region) and was not affected by stump harvesting. Overall, eight diplopod species were found on stumps at both SH and C clearcuts. Only two species of chilopods were found on the stumps, occurring in low abundances and revealing no response to stump harvesting. The significant loss of diplopod specimens per stump after stump harvesting may be linked to a corresponding loss in function, particularly the mechanical breakdown of woody substrates. The results indicate that a reduction of habitats for stump species with low dispersal ability can both reduce their abundance per unit substrate and potentially also change the stump decomposition rate compared to sites with higher stump densities. Our results therefore highlight a need for careful consideration of increased intensity of stump harvesting at the landscape level.