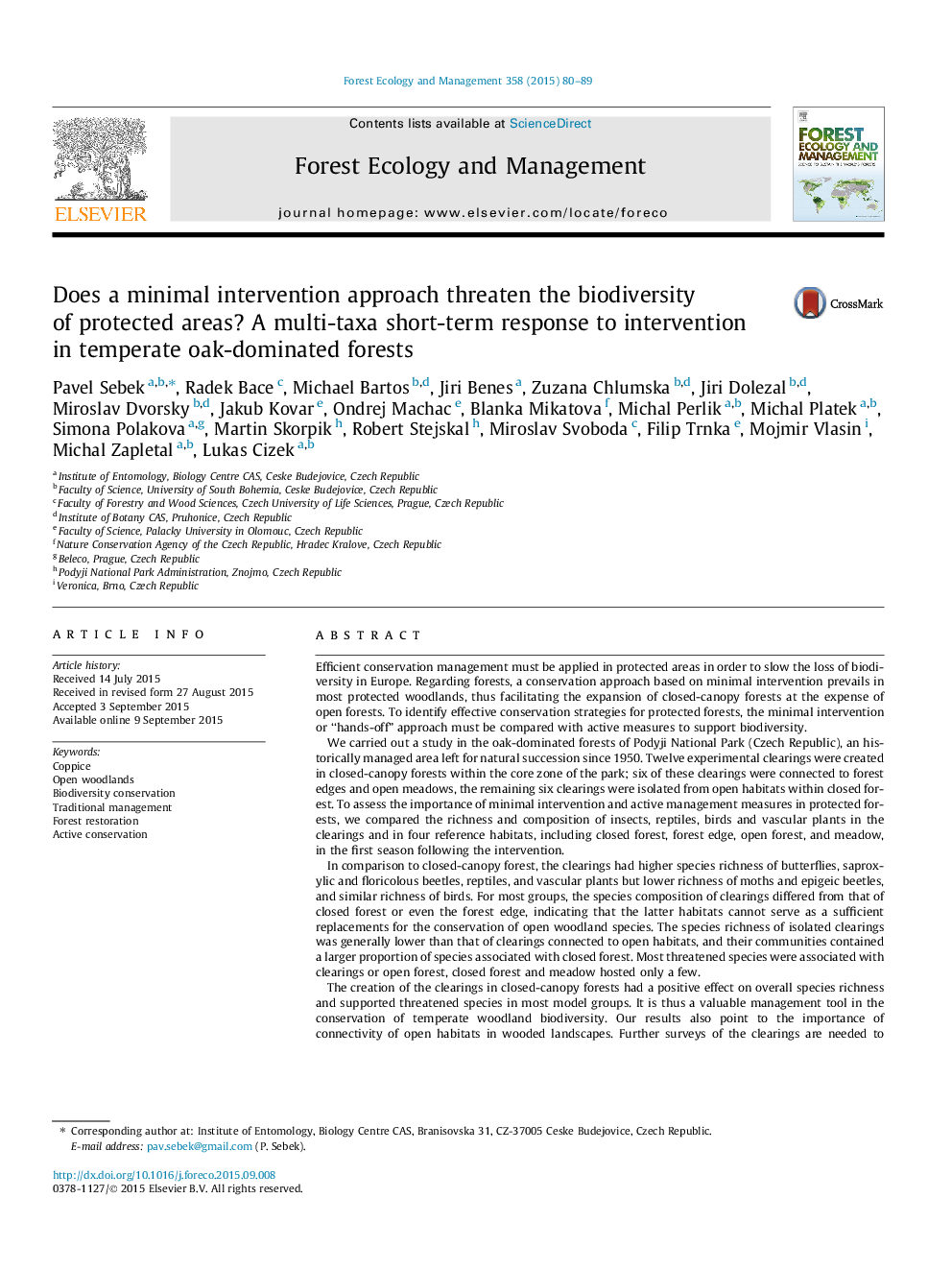 • Small-size clearings have been created in protected closed-canopy forests.
• Richness and composition of insects, reptiles, birds and plants have been studied.
• The intervention had a positive effect in most model groups.

Efficient conservation management must be applied in protected areas in order to slow the loss of biodiversity in Europe. Regarding forests, a conservation approach based on minimal intervention prevails in most protected woodlands, thus facilitating the expansion of closed-canopy forests at the expense of open forests. To identify effective conservation strategies for protected forests, the minimal intervention or “hands-off” approach must be compared with active measures to support biodiversity.We carried out a study in the oak-dominated forests of Podyji National Park (Czech Republic), an historically managed area left for natural succession since 1950. Twelve experimental clearings were created in closed-canopy forests within the core zone of the park; six of these clearings were connected to forest edges and open meadows, the remaining six clearings were isolated from open habitats within closed forest. To assess the importance of minimal intervention and active management measures in protected forests, we compared the richness and composition of insects, reptiles, birds and vascular plants in the clearings and in four reference habitats, including closed forest, forest edge, open forest, and meadow, in the first season following the intervention.In comparison to closed-canopy forest, the clearings had higher species richness of butterflies, saproxylic and floricolous beetles, reptiles, and vascular plants but lower richness of moths and epigeic beetles, and similar richness of birds. For most groups, the species composition of clearings differed from that of closed forest or even the forest edge, indicating that the latter habitats cannot serve as a sufficient replacements for the conservation of open woodland species. The species richness of isolated clearings was generally lower than that of clearings connected to open habitats, and their communities contained a larger proportion of species associated with closed forest. Most threatened species were associated with clearings or open forest, closed forest and meadow hosted only a few.The creation of the clearings in closed-canopy forests had a positive effect on overall species richness and supported threatened species in most model groups. It is thus a valuable management tool in the conservation of temperate woodland biodiversity. Our results also point to the importance of connectivity of open habitats in wooded landscapes. Further surveys of the clearings are needed to ascertain the effect of such interventions to see how communities change throughout succession, or alternatively to what extent hindering succession by repeated cutting may alter communities.