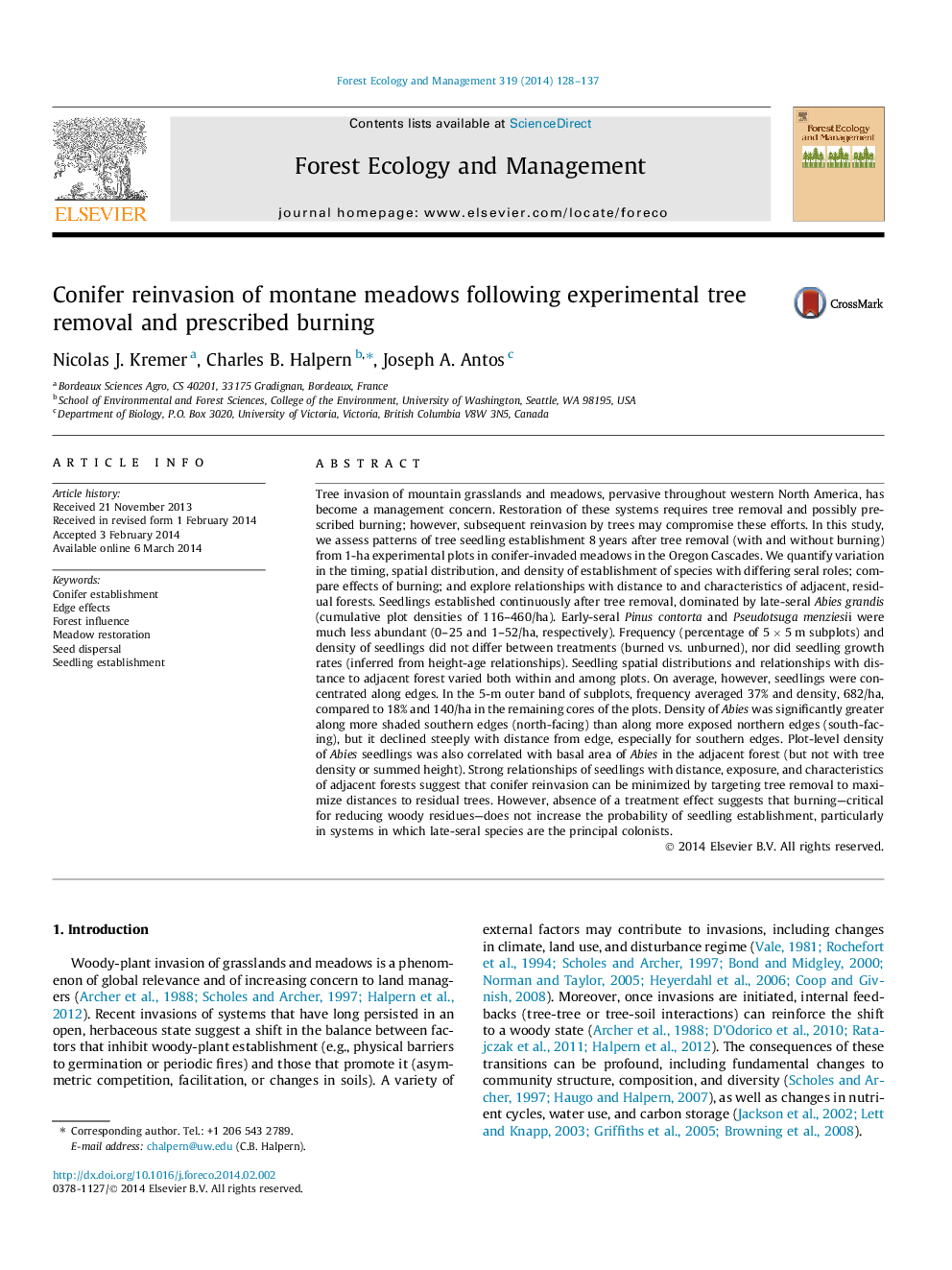 • We studied conifer reinvasion of montane grasslands after tree-removal treatments.
• Seedling density increased with proximity to edge and basal area of adjacent forest.
• Density was greater along S than along N edges, indicative of a shading effect.
• Establishment and height growth were similar in burned and unburned treatments.
• Seed availability and edge effects are the principal determinants of establishment.

Tree invasion of mountain grasslands and meadows, pervasive throughout western North America, has become a management concern. Restoration of these systems requires tree removal and possibly prescribed burning; however, subsequent reinvasion by trees may compromise these efforts. In this study, we assess patterns of tree seedling establishment 8 years after tree removal (with and without burning) from 1-ha experimental plots in conifer-invaded meadows in the Oregon Cascades. We quantify variation in the timing, spatial distribution, and density of establishment of species with differing seral roles; compare effects of burning; and explore relationships with distance to and characteristics of adjacent, residual forests. Seedlings established continuously after tree removal, dominated by late-seral Abies grandis (cumulative plot densities of 116–460/ha). Early-seral Pinus contorta and Pseudotsuga menziesii were much less abundant (0–25 and 1–52/ha, respectively). Frequency (percentage of 5 × 5 m subplots) and density of seedlings did not differ between treatments (burned vs. unburned), nor did seedling growth rates (inferred from height-age relationships). Seedling spatial distributions and relationships with distance to adjacent forest varied both within and among plots. On average, however, seedlings were concentrated along edges. In the 5-m outer band of subplots, frequency averaged 37% and density, 682/ha, compared to 18% and 140/ha in the remaining cores of the plots. Density of Abies was significantly greater along more shaded southern edges (north-facing) than along more exposed northern edges (south-facing), but it declined steeply with distance from edge, especially for southern edges. Plot-level density of Abies seedlings was also correlated with basal area of Abies in the adjacent forest (but not with tree density or summed height). Strong relationships of seedlings with distance, exposure, and characteristics of adjacent forests suggest that conifer reinvasion can be minimized by targeting tree removal to maximize distances to residual trees. However, absence of a treatment effect suggests that burning—critical for reducing woody residues—does not increase the probability of seedling establishment, particularly in systems in which late-seral species are the principal colonists.