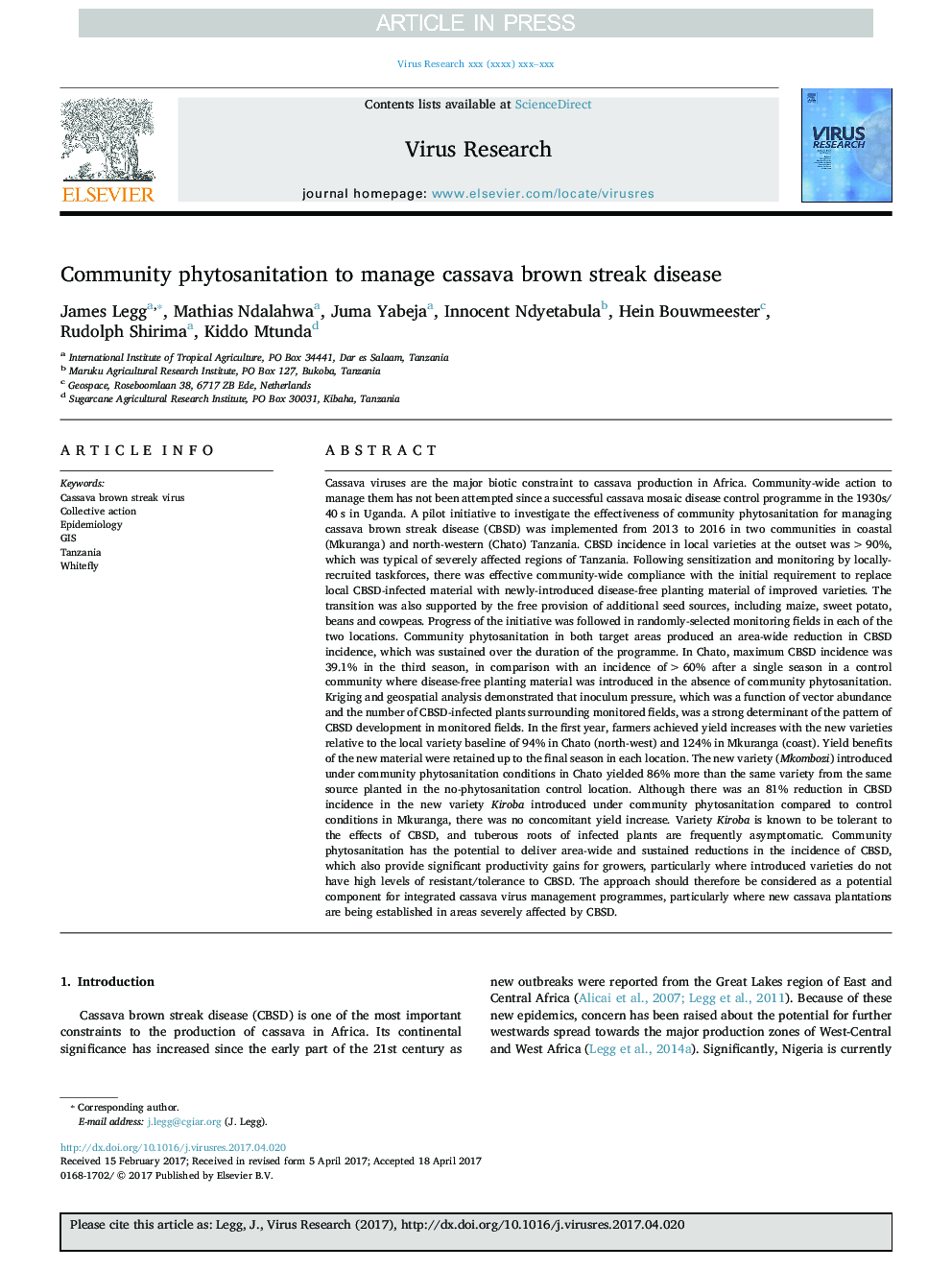 چکیده انگلیسی
Cassava viruses are the major biotic constraint to cassava production in Africa. Community-wide action to manage them has not been attempted since a successful cassava mosaic disease control programme in the 1930s/40Â s in Uganda. A pilot initiative to investigate the effectiveness of community phytosanitation for managing cassava brown streak disease (CBSD) was implemented from 2013 to 2016 in two communities in coastal (Mkuranga) and north-western (Chato) Tanzania. CBSD incidence in local varieties at the outset was >90%, which was typical of severely affected regions of Tanzania. Following sensitization and monitoring by locally-recruited taskforces, there was effective community-wide compliance with the initial requirement to replace local CBSD-infected material with newly-introduced disease-free planting material of improved varieties. The transition was also supported by the free provision of additional seed sources, including maize, sweet potato, beans and cowpeas. Progress of the initiative was followed in randomly-selected monitoring fields in each of the two locations. Community phytosanitation in both target areas produced an area-wide reduction in CBSD incidence, which was sustained over the duration of the programme. In Chato, maximum CBSD incidence was 39.1% in the third season, in comparison with an incidence of >60% after a single season in a control community where disease-free planting material was introduced in the absence of community phytosanitation. Kriging and geospatial analysis demonstrated that inoculum pressure, which was a function of vector abundance and the number of CBSD-infected plants surrounding monitored fields, was a strong determinant of the pattern of CBSD development in monitored fields. In the first year, farmers achieved yield increases with the new varieties relative to the local variety baseline of 94% in Chato (north-west) and 124% in Mkuranga (coast). Yield benefits of the new material were retained up to the final season in each location. The new variety (Mkombozi) introduced under community phytosanitation conditions in Chato yielded 86% more than the same variety from the same source planted in the no-phytosanitation control location. Although there was an 81% reduction in CBSD incidence in the new variety Kiroba introduced under community phytosanitation compared to control conditions in Mkuranga, there was no concomitant yield increase. Variety Kiroba is known to be tolerant to the effects of CBSD, and tuberous roots of infected plants are frequently asymptomatic. Community phytosanitation has the potential to deliver area-wide and sustained reductions in the incidence of CBSD, which also provide significant productivity gains for growers, particularly where introduced varieties do not have high levels of resistant/tolerance to CBSD. The approach should therefore be considered as a potential component for integrated cassava virus management programmes, particularly where new cassava plantations are being established in areas severely affected by CBSD.
ناشر
Database: Elsevier - ScienceDirect (ساینس دایرکت)
Journal: Virus Research - Volume 241, 15 September 2017, Pages 236-253
نویسندگان
James Legg, Mathias Ndalahwa, Juma Yabeja, Innocent Ndyetabula, Hein Bouwmeester, Rudolph Shirima, Kiddo Mtunda,
دانلود مقاله + سفارش ترجمه
دانلود مقاله ISI انگلیسی
رایگان برای ایرانیان
سفارش ترجمه تخصصی
با تضمین قیمت و کیفیت
منتشر شده در