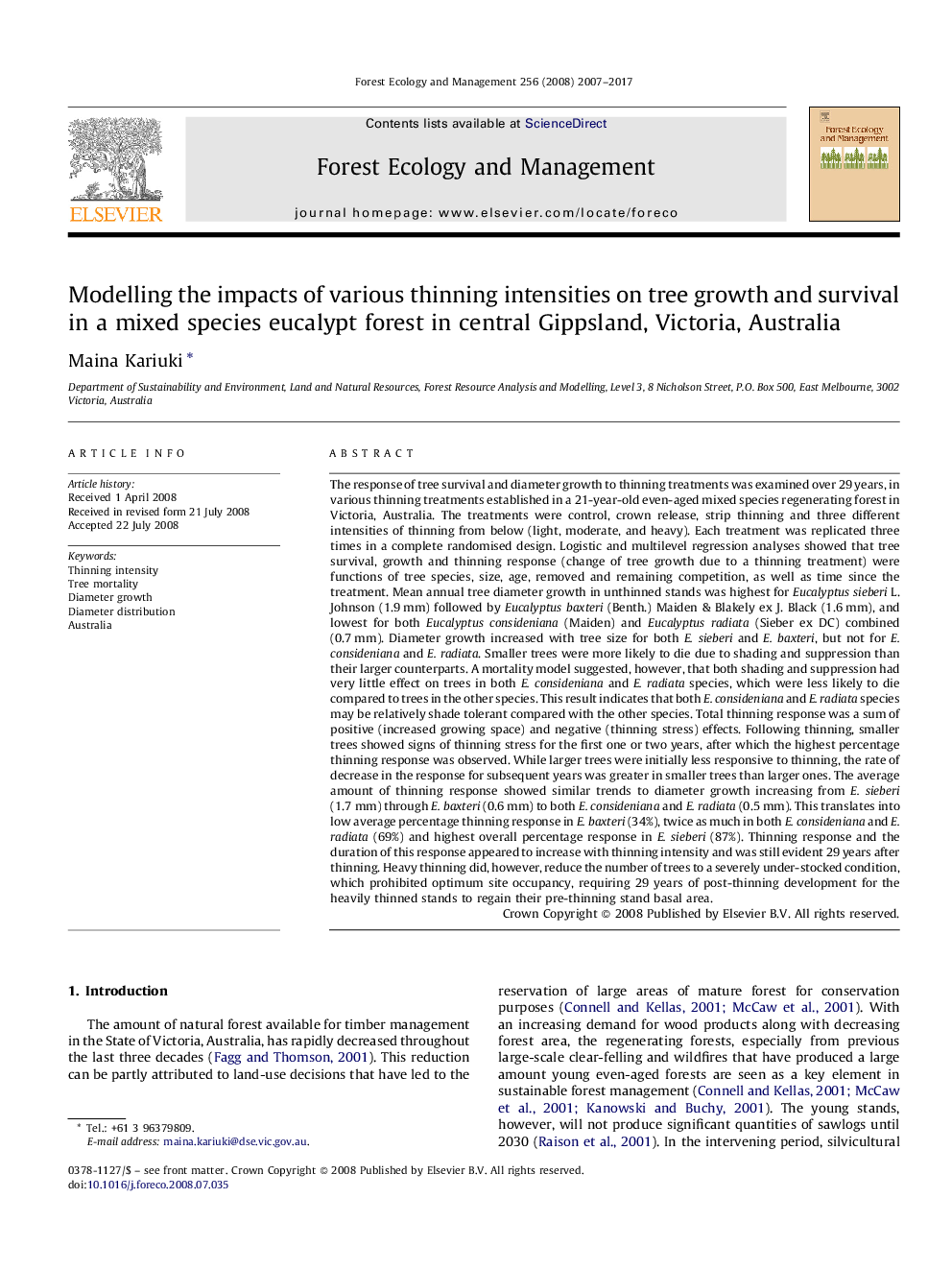 The response of tree survival and diameter growth to thinning treatments was examined over 29 years, in various thinning treatments established in a 21-year-old even-aged mixed species regenerating forest in Victoria, Australia. The treatments were control, crown release, strip thinning and three different intensities of thinning from below (light, moderate, and heavy). Each treatment was replicated three times in a complete randomised design. Logistic and multilevel regression analyses showed that tree survival, growth and thinning response (change of tree growth due to a thinning treatment) were functions of tree species, size, age, removed and remaining competition, as well as time since the treatment. Mean annual tree diameter growth in unthinned stands was highest for Eucalyptus sieberi L. Johnson (1.9 mm) followed by Eucalyptus baxteri (Benth.) Maiden & Blakely ex J. Black (1.6 mm), and lowest for both Eucalyptus consideniana (Maiden) and Eucalyptus radiata (Sieber ex DC) combined (0.7 mm). Diameter growth increased with tree size for both E. sieberi and E. baxteri, but not for E. consideniana and E. radiata. Smaller trees were more likely to die due to shading and suppression than their larger counterparts. A mortality model suggested, however, that both shading and suppression had very little effect on trees in both E. consideniana and E. radiata species, which were less likely to die compared to trees in the other species. This result indicates that both E. consideniana and E. radiata species may be relatively shade tolerant compared with the other species. Total thinning response was a sum of positive (increased growing space) and negative (thinning stress) effects. Following thinning, smaller trees showed signs of thinning stress for the first one or two years, after which the highest percentage thinning response was observed. While larger trees were initially less responsive to thinning, the rate of decrease in the response for subsequent years was greater in smaller trees than larger ones. The average amount of thinning response showed similar trends to diameter growth increasing from E. sieberi (1.7 mm) through E. baxteri (0.6 mm) to both E. consideniana and E. radiata (0.5 mm). This translates into low average percentage thinning response in E. baxteri (34%), twice as much in both E. consideniana and E. radiata (69%) and highest overall percentage response in E. sieberi (87%). Thinning response and the duration of this response appeared to increase with thinning intensity and was still evident 29 years after thinning. Heavy thinning did, however, reduce the number of trees to a severely under-stocked condition, which prohibited optimum site occupancy, requiring 29 years of post-thinning development for the heavily thinned stands to regain their pre-thinning stand basal area.