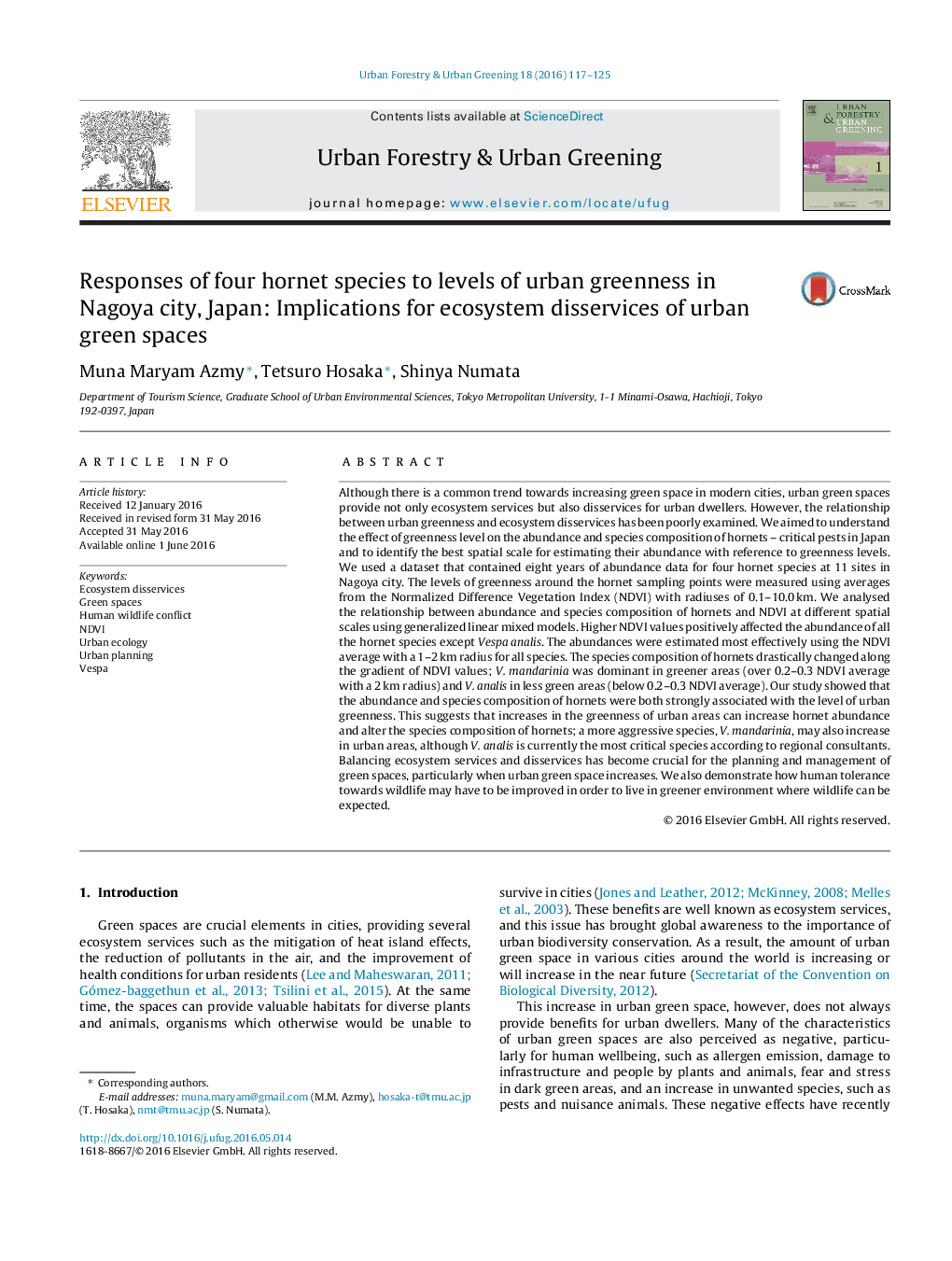 • We examined correlation between landscape greenness level and abundance of hornets, critical pests in modern Japanese cities.
• The abundance and species composition of hornets were strongly associated with the level of landscape greenness.
• The abundance was estimated most effectively using the NDVI average within 1–2 km radius for all species.
• Increasing greenness level in urban landscape is suggested as potential source of conflicts between residents and hornets.

Although there is a common trend towards increasing green space in modern cities, urban green spaces provide not only ecosystem services but also disservices for urban dwellers. However, the relationship between urban greenness and ecosystem disservices has been poorly examined. We aimed to understand the effect of greenness level on the abundance and species composition of hornets – critical pests in Japan and to identify the best spatial scale for estimating their abundance with reference to greenness levels. We used a dataset that contained eight years of abundance data for four hornet species at 11 sites in Nagoya city. The levels of greenness around the hornet sampling points were measured using averages from the Normalized Difference Vegetation Index (NDVI) with radiuses of 0.1–10.0 km. We analysed the relationship between abundance and species composition of hornets and NDVI at different spatial scales using generalized linear mixed models. Higher NDVI values positively affected the abundance of all the hornet species except Vespa analis. The abundances were estimated most effectively using the NDVI average with a 1–2 km radius for all species. The species composition of hornets drastically changed along the gradient of NDVI values; V. mandarinia was dominant in greener areas (over 0.2–0.3 NDVI average with a 2 km radius) and V. analis in less green areas (below 0.2–0.3 NDVI average). Our study showed that the abundance and species composition of hornets were both strongly associated with the level of urban greenness. This suggests that increases in the greenness of urban areas can increase hornet abundance and alter the species composition of hornets; a more aggressive species, V. mandarinia, may also increase in urban areas, although V. analis is currently the most critical species according to regional consultants. Balancing ecosystem services and disservices has become crucial for the planning and management of green spaces, particularly when urban green space increases. We also demonstrate how human tolerance towards wildlife may have to be improved in order to live in greener environment where wildlife can be expected.