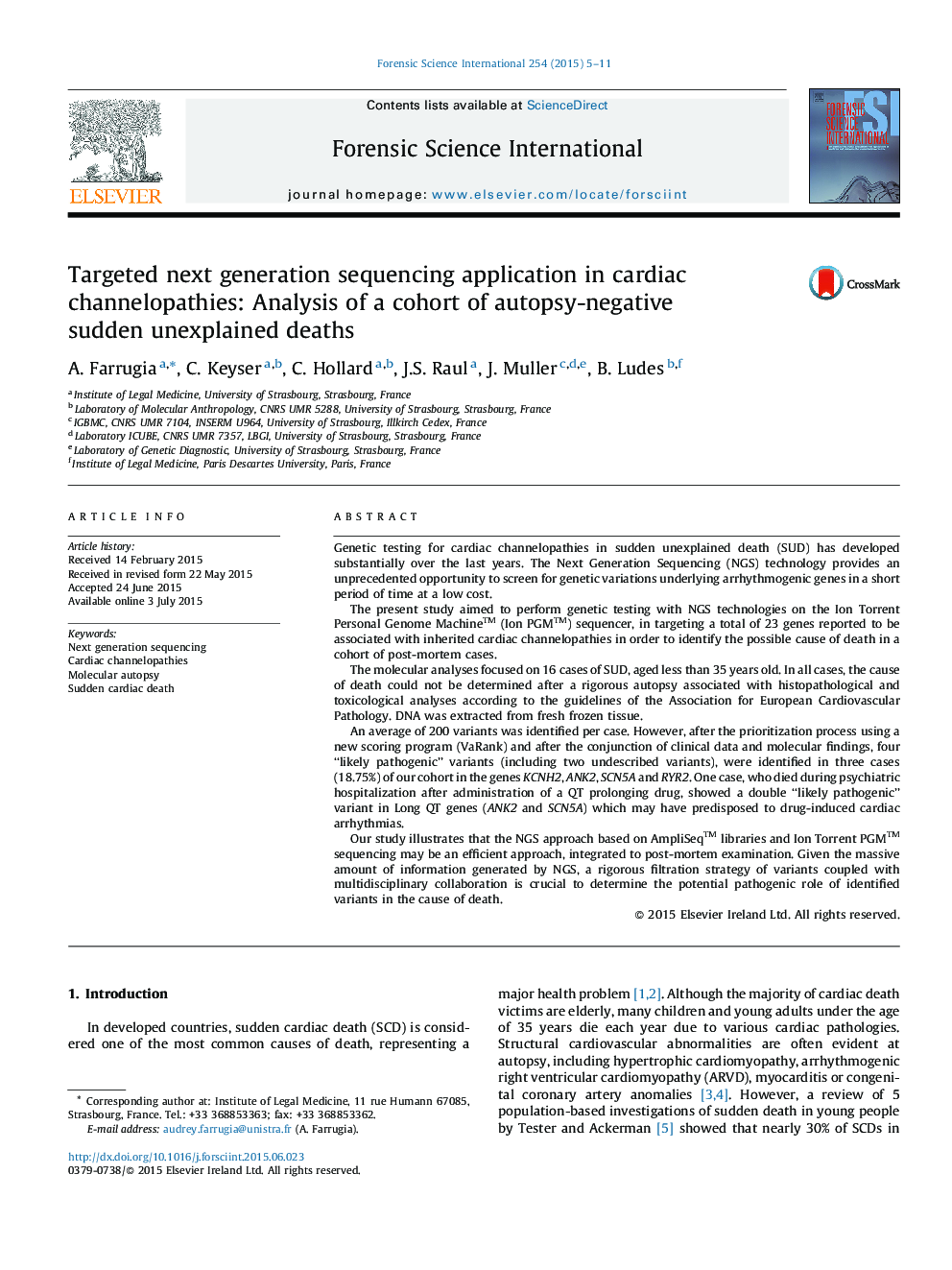 • NGS based strategy applied to a cohort of post-mortem cases.
• Investigations of 23 genes associated with inherited cardiac channelopathies.
• Identification of variants which may predispose to drug-induced cardiac arrhythmia.
• One of the main challenges of NGS technologies is the analyses of the data itself.
• Conjunction of clinical data and molecular findings is essential.

Genetic testing for cardiac channelopathies in sudden unexplained death (SUD) has developed substantially over the last years. The Next Generation Sequencing (NGS) technology provides an unprecedented opportunity to screen for genetic variations underlying arrhythmogenic genes in a short period of time at a low cost.The present study aimed to perform genetic testing with NGS technologies on the Ion Torrent Personal Genome Machine™ (Ion PGM™) sequencer, in targeting a total of 23 genes reported to be associated with inherited cardiac channelopathies in order to identify the possible cause of death in a cohort of post-mortem cases.The molecular analyses focused on 16 cases of SUD, aged less than 35 years old. In all cases, the cause of death could not be determined after a rigorous autopsy associated with histopathological and toxicological analyses according to the guidelines of the Association for European Cardiovascular Pathology. DNA was extracted from fresh frozen tissue.An average of 200 variants was identified per case. However, after the prioritization process using a new scoring program (VaRank) and after the conjunction of clinical data and molecular findings, four “likely pathogenic” variants (including two undescribed variants), were identified in three cases (18.75%) of our cohort in the genes KCNH2, ANK2, SCN5A and RYR2. One case, who died during psychiatric hospitalization after administration of a QT prolonging drug, showed a double “likely pathogenic” variant in Long QT genes (ANK2 and SCN5A) which may have predisposed to drug-induced cardiac arrhythmias.Our study illustrates that the NGS approach based on AmpliSeq™ libraries and Ion Torrent PGM™ sequencing may be an efficient approach, integrated to post-mortem examination. Given the massive amount of information generated by NGS, a rigorous filtration strategy of variants coupled with multidisciplinary collaboration is crucial to determine the potential pathogenic role of identified variants in the cause of death.