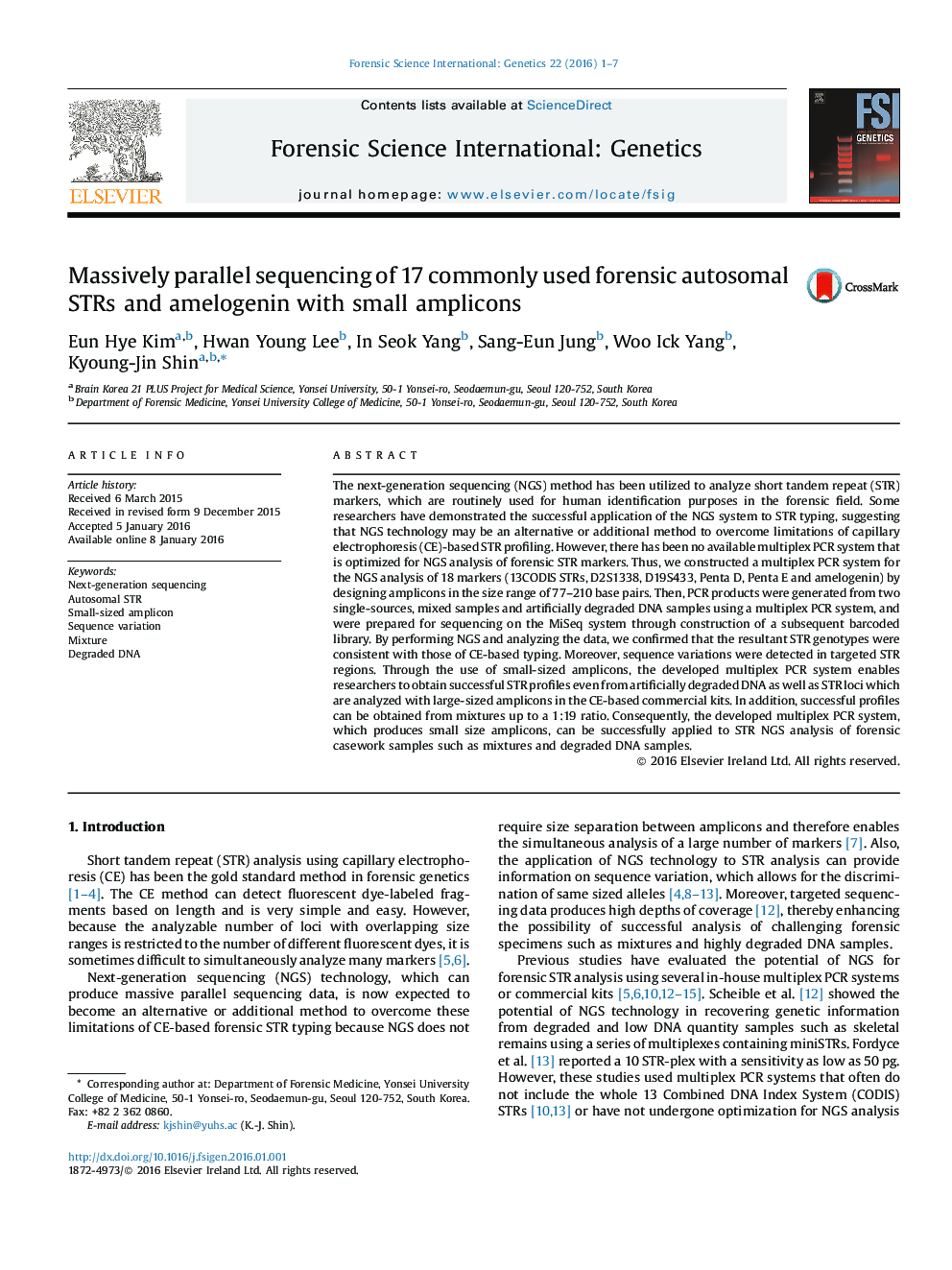 • The multiplex PCR system produces small-sized amplicons for 17 forensic STRs and amelogenin.
• STR genotyping results obtained from the MiSeq showed full concordance with those from CE.
• Sequence variations were detected in D2S1338, D3S1358, D8S1179, D21S11 and vWA.
• Successful profiles could be obtained with mixtures up to a 1:19 ratio using NGS analysis.
• This system will be useful to obtain full STR profiles from degraded DNA samples using NGS.

The next-generation sequencing (NGS) method has been utilized to analyze short tandem repeat (STR) markers, which are routinely used for human identification purposes in the forensic field. Some researchers have demonstrated the successful application of the NGS system to STR typing, suggesting that NGS technology may be an alternative or additional method to overcome limitations of capillary electrophoresis (CE)-based STR profiling. However, there has been no available multiplex PCR system that is optimized for NGS analysis of forensic STR markers. Thus, we constructed a multiplex PCR system for the NGS analysis of 18 markers (13CODIS STRs, D2S1338, D19S433, Penta D, Penta E and amelogenin) by designing amplicons in the size range of 77–210 base pairs. Then, PCR products were generated from two single-sources, mixed samples and artificially degraded DNA samples using a multiplex PCR system, and were prepared for sequencing on the MiSeq system through construction of a subsequent barcoded library. By performing NGS and analyzing the data, we confirmed that the resultant STR genotypes were consistent with those of CE-based typing. Moreover, sequence variations were detected in targeted STR regions. Through the use of small-sized amplicons, the developed multiplex PCR system enables researchers to obtain successful STR profiles even from artificially degraded DNA as well as STR loci which are analyzed with large-sized amplicons in the CE-based commercial kits. In addition, successful profiles can be obtained from mixtures up to a 1:19 ratio. Consequently, the developed multiplex PCR system, which produces small size amplicons, can be successfully applied to STR NGS analysis of forensic casework samples such as mixtures and degraded DNA samples.