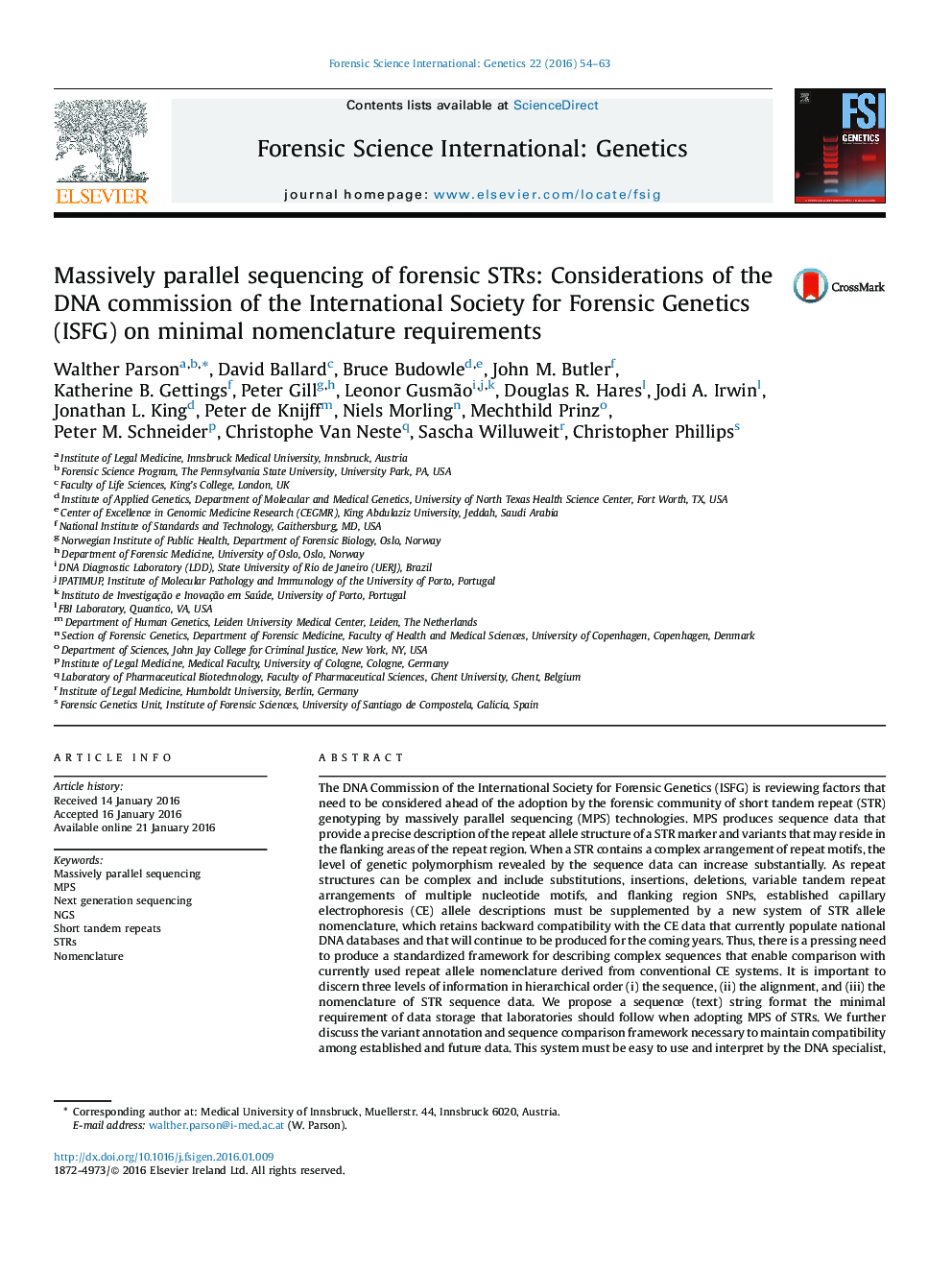 • The DNA Commission of the International Society for Forensic Genetics (ISFG) is reviewing factors that need to be considered for STR genotyping by massively parallel sequencing (MPS) technologies.
• The manuscript leads through the process of forensic STR sequence alignment and provides directions for possible nomenclature schemes.
• The supplementary files offer details on the alignment of commonly used forensic STR loci to serve as template and guidance for the forensic scientist.

The DNA Commission of the International Society for Forensic Genetics (ISFG) is reviewing factors that need to be considered ahead of the adoption by the forensic community of short tandem repeat (STR) genotyping by massively parallel sequencing (MPS) technologies. MPS produces sequence data that provide a precise description of the repeat allele structure of a STR marker and variants that may reside in the flanking areas of the repeat region. When a STR contains a complex arrangement of repeat motifs, the level of genetic polymorphism revealed by the sequence data can increase substantially. As repeat structures can be complex and include substitutions, insertions, deletions, variable tandem repeat arrangements of multiple nucleotide motifs, and flanking region SNPs, established capillary electrophoresis (CE) allele descriptions must be supplemented by a new system of STR allele nomenclature, which retains backward compatibility with the CE data that currently populate national DNA databases and that will continue to be produced for the coming years. Thus, there is a pressing need to produce a standardized framework for describing complex sequences that enable comparison with currently used repeat allele nomenclature derived from conventional CE systems. It is important to discern three levels of information in hierarchical order (i) the sequence, (ii) the alignment, and (iii) the nomenclature of STR sequence data. We propose a sequence (text) string format the minimal requirement of data storage that laboratories should follow when adopting MPS of STRs. We further discuss the variant annotation and sequence comparison framework necessary to maintain compatibility among established and future data. This system must be easy to use and interpret by the DNA specialist, based on a universally accessible genome assembly, and in place before the uptake of MPS by the general forensic community starts to generate sequence data on a large scale. While the established nomenclature for CE-based STR analysis will remain unchanged in the future, the nomenclature of sequence-based STR genotypes will need to follow updated rules and be generated by expert systems that translate MPS sequences to match CE conventions in order to guarantee compatibility between the different generations of STR data.