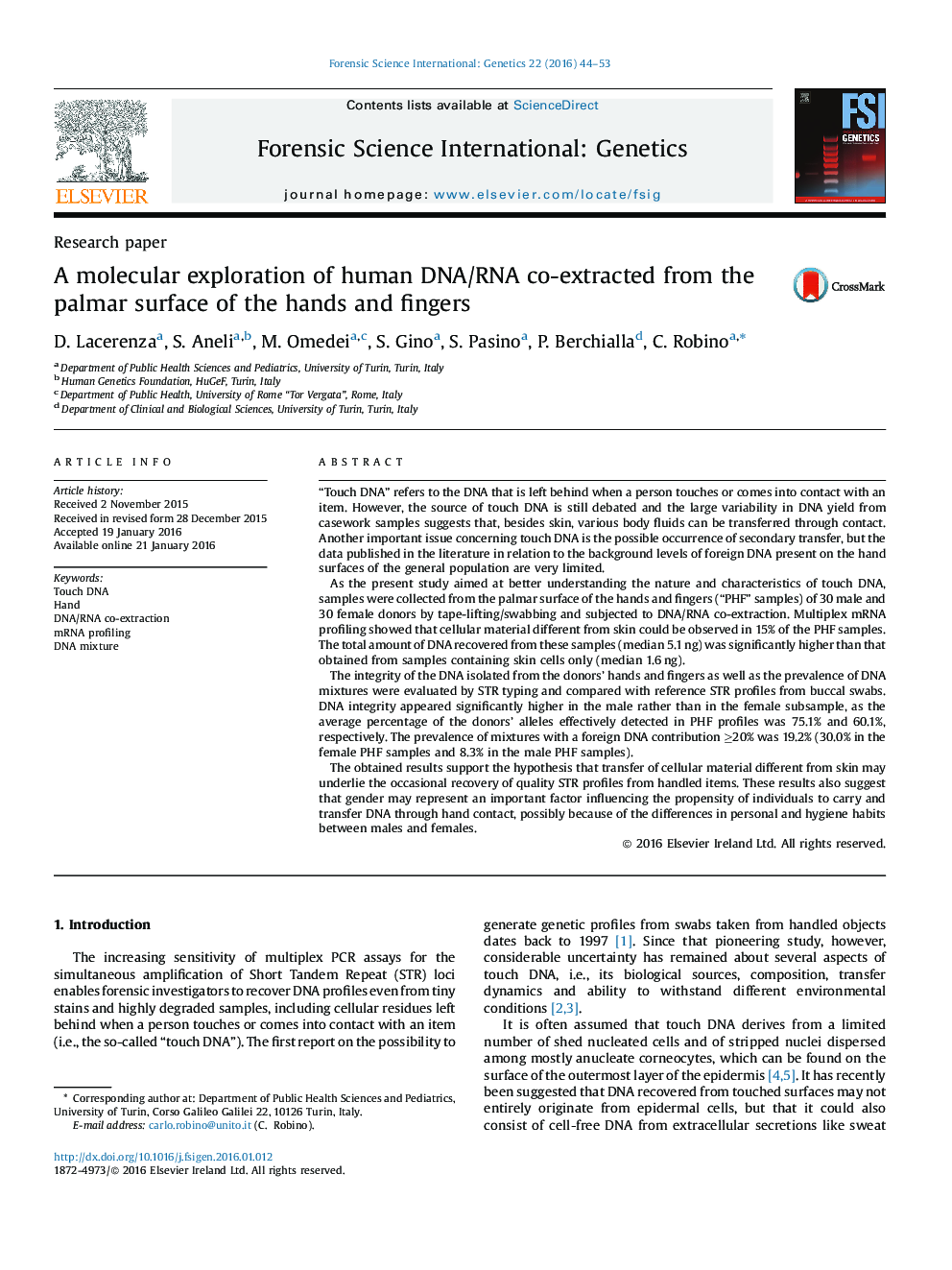 • Origin of touch DNA and background levels of foreign DNA on human hands are debated.
• We performed DNA/RNA co-analysis of palmar samples to address both issues.
• 15% of the samples included tissues other than skin, according to mRNA profiling.
• Samples including tissues other than skin gave significantly higher DNA yields.
• DNA quantity/integrity was higher in males; prevalence of DNA mixtures in females.

“Touch DNA” refers to the DNA that is left behind when a person touches or comes into contact with an item. However, the source of touch DNA is still debated and the large variability in DNA yield from casework samples suggests that, besides skin, various body fluids can be transferred through contact. Another important issue concerning touch DNA is the possible occurrence of secondary transfer, but the data published in the literature in relation to the background levels of foreign DNA present on the hand surfaces of the general population are very limited.As the present study aimed at better understanding the nature and characteristics of touch DNA, samples were collected from the palmar surface of the hands and fingers (“PHF” samples) of 30 male and 30 female donors by tape-lifting/swabbing and subjected to DNA/RNA co-extraction. Multiplex mRNA profiling showed that cellular material different from skin could be observed in 15% of the PHF samples. The total amount of DNA recovered from these samples (median 5.1 ng) was significantly higher than that obtained from samples containing skin cells only (median 1.6 ng).The integrity of the DNA isolated from the donors’ hands and fingers as well as the prevalence of DNA mixtures were evaluated by STR typing and compared with reference STR profiles from buccal swabs. DNA integrity appeared significantly higher in the male rather than in the female subsample, as the average percentage of the donors’ alleles effectively detected in PHF profiles was 75.1% and 60.1%, respectively. The prevalence of mixtures with a foreign DNA contribution ≥20% was 19.2% (30.0% in the female PHF samples and 8.3% in the male PHF samples).The obtained results support the hypothesis that transfer of cellular material different from skin may underlie the occasional recovery of quality STR profiles from handled items. These results also suggest that gender may represent an important factor influencing the propensity of individuals to carry and transfer DNA through hand contact, possibly because of the differences in personal and hygiene habits between males and females.