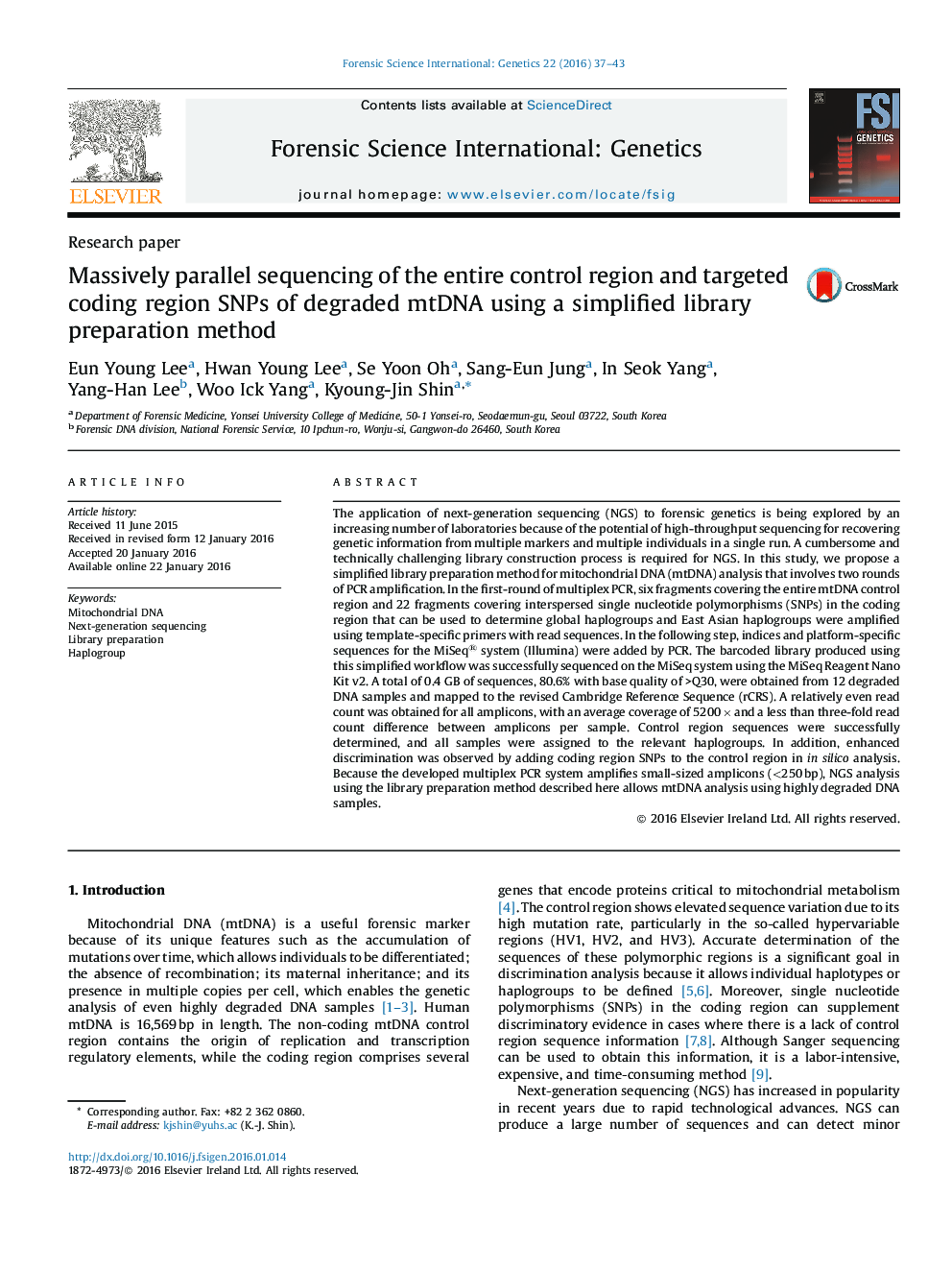 • We propose a simplified library preparation method composed of 2-round PCR amplification.
• mtDNA sequencing targeted the entire control region and 32 SNPs in the coding region.
• We obtained successful NGS results for 336 fragments from 12 degraded samples.
• Each sample was assigned to a certain haplogroup according to the observed sequence variation.
• NGS results of the control region corresponded to those using Sanger method.

The application of next-generation sequencing (NGS) to forensic genetics is being explored by an increasing number of laboratories because of the potential of high-throughput sequencing for recovering genetic information from multiple markers and multiple individuals in a single run. A cumbersome and technically challenging library construction process is required for NGS. In this study, we propose a simplified library preparation method for mitochondrial DNA (mtDNA) analysis that involves two rounds of PCR amplification. In the first-round of multiplex PCR, six fragments covering the entire mtDNA control region and 22 fragments covering interspersed single nucleotide polymorphisms (SNPs) in the coding region that can be used to determine global haplogroups and East Asian haplogroups were amplified using template-specific primers with read sequences. In the following step, indices and platform-specific sequences for the MiSeq® system (Illumina) were added by PCR. The barcoded library produced using this simplified workflow was successfully sequenced on the MiSeq system using the MiSeq Reagent Nano Kit v2. A total of 0.4 GB of sequences, 80.6% with base quality of >Q30, were obtained from 12 degraded DNA samples and mapped to the revised Cambridge Reference Sequence (rCRS). A relatively even read count was obtained for all amplicons, with an average coverage of 5200 × and a less than three-fold read count difference between amplicons per sample. Control region sequences were successfully determined, and all samples were assigned to the relevant haplogroups. In addition, enhanced discrimination was observed by adding coding region SNPs to the control region in in silico analysis. Because the developed multiplex PCR system amplifies small-sized amplicons (<250 bp), NGS analysis using the library preparation method described here allows mtDNA analysis using highly degraded DNA samples.