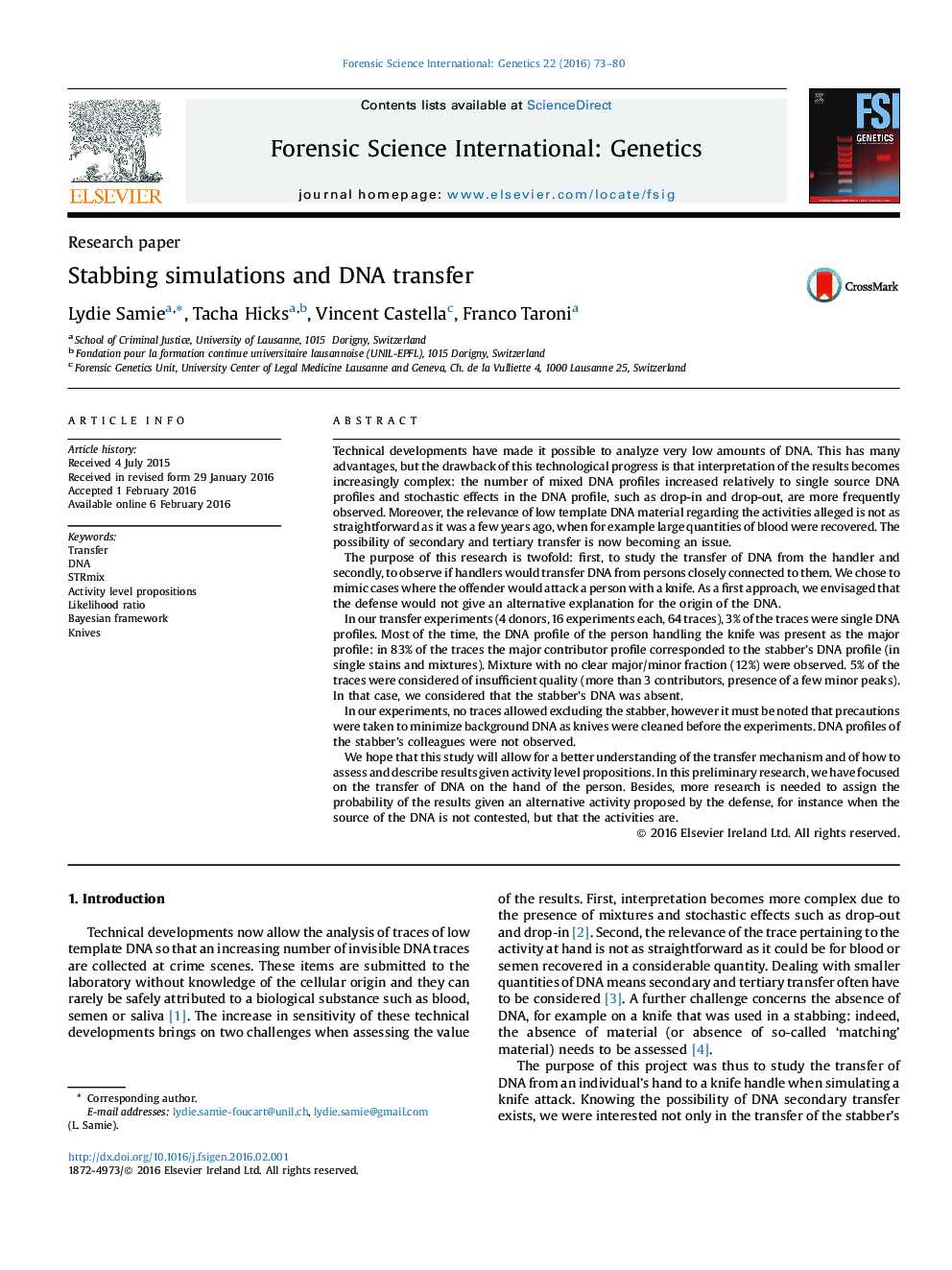 • This preliminary research provides information with regard to transfer of DNA when the alleged activity involves ‘stabbing.
• In the majority of the experiments (61/64), mixtures were observed on the knife (that however had been cleaned).
• The stabber generally appeared as the major contributor (53/64).
• Secondary transfer of DNA from colleagues with whom the stabber had spent time with – in the hours preceding the experiments – was not observed.

Technical developments have made it possible to analyze very low amounts of DNA. This has many advantages, but the drawback of this technological progress is that interpretation of the results becomes increasingly complex: the number of mixed DNA profiles increased relatively to single source DNA profiles and stochastic effects in the DNA profile, such as drop-in and drop-out, are more frequently observed. Moreover, the relevance of low template DNA material regarding the activities alleged is not as straightforward as it was a few years ago, when for example large quantities of blood were recovered. The possibility of secondary and tertiary transfer is now becoming an issue.The purpose of this research is twofold: first, to study the transfer of DNA from the handler and secondly, to observe if handlers would transfer DNA from persons closely connected to them. We chose to mimic cases where the offender would attack a person with a knife. As a first approach, we envisaged that the defense would not give an alternative explanation for the origin of the DNA.In our transfer experiments (4 donors, 16 experiments each, 64 traces), 3% of the traces were single DNA profiles. Most of the time, the DNA profile of the person handling the knife was present as the major profile: in 83% of the traces the major contributor profile corresponded to the stabber’s DNA profile (in single stains and mixtures). Mixture with no clear major/minor fraction (12%) were observed. 5% of the traces were considered of insufficient quality (more than 3 contributors, presence of a few minor peaks). In that case, we considered that the stabber’s DNA was absent.In our experiments, no traces allowed excluding the stabber, however it must be noted that precautions were taken to minimize background DNA as knives were cleaned before the experiments. DNA profiles of the stabber’s colleagues were not observed.We hope that this study will allow for a better understanding of the transfer mechanism and of how to assess and describe results given activity level propositions. In this preliminary research, we have focused on the transfer of DNA on the hand of the person. Besides, more research is needed to assign the probability of the results given an alternative activity proposed by the defense, for instance when the source of the DNA is not contested, but that the activities are.