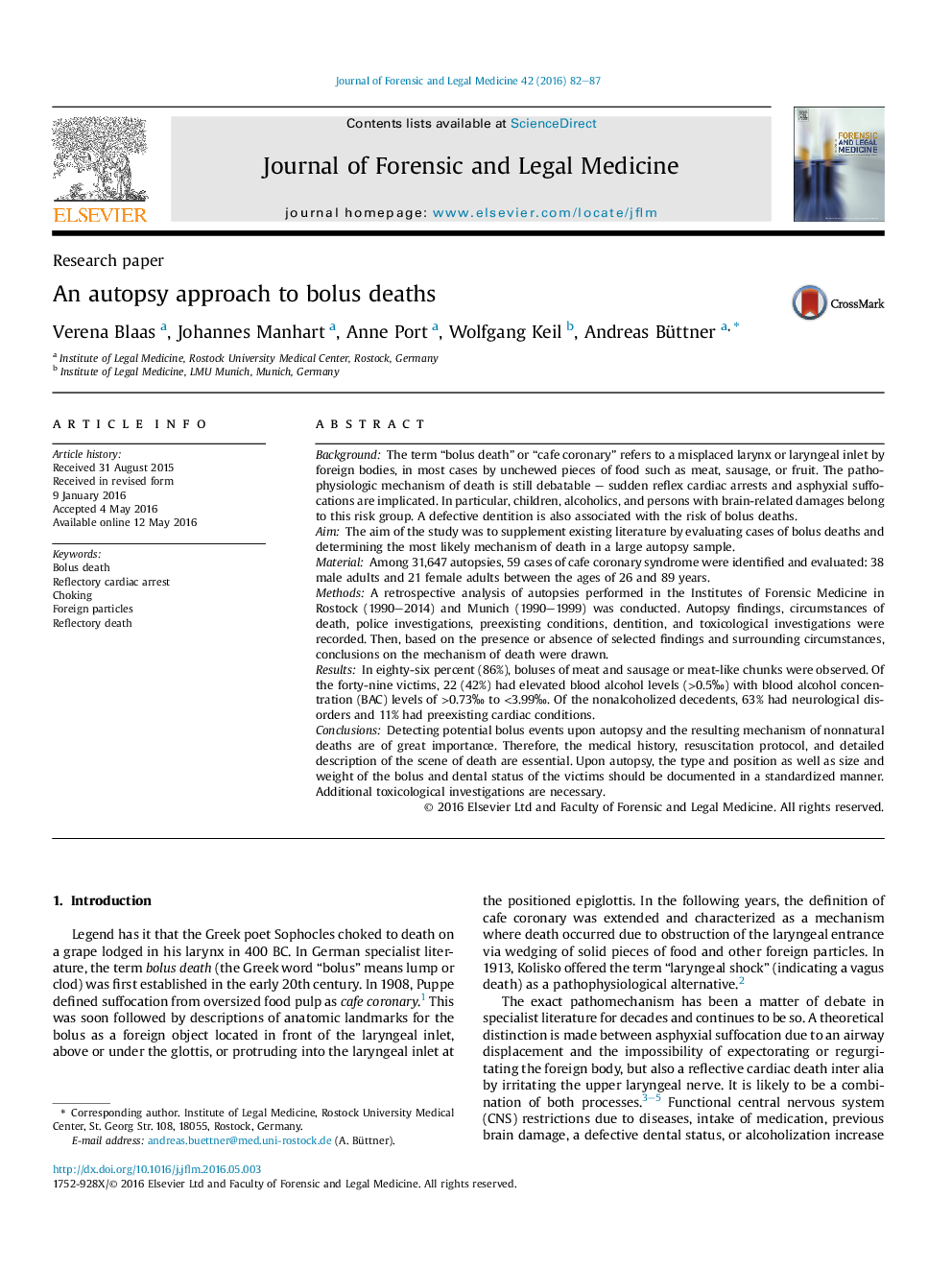 • We performed a retrospective autopsy study on bolus deaths in two cities and discussed their characteristics.
• Among 31,647 autopsies, 59 cases (0.18%) of bolus deaths were detected.
• Adults aged 51–60 and >71 years were most commonly affected.
• Ninety-one percent suffered from cardiac and/or neurological conditions.
• Suffocation, reflective cardiac arrest, or a combination of both is assumed to be the mechanism leading to death.

BackgroundThe term “bolus death” or “cafe coronary” refers to a misplaced larynx or laryngeal inlet by foreign bodies, in most cases by unchewed pieces of food such as meat, sausage, or fruit. The pathophysiologic mechanism of death is still debatable – sudden reflex cardiac arrests and asphyxial suffocations are implicated. In particular, children, alcoholics, and persons with brain-related damages belong to this risk group. A defective dentition is also associated with the risk of bolus deaths.AimThe aim of the study was to supplement existing literature by evaluating cases of bolus deaths and determining the most likely mechanism of death in a large autopsy sample.MaterialAmong 31,647 autopsies, 59 cases of cafe coronary syndrome were identified and evaluated: 38 male adults and 21 female adults between the ages of 26 and 89 years.MethodsA retrospective analysis of autopsies performed in the Institutes of Forensic Medicine in Rostock (1990–2014) and Munich (1990–1999) was conducted. Autopsy findings, circumstances of death, police investigations, preexisting conditions, dentition, and toxicological investigations were recorded. Then, based on the presence or absence of selected findings and surrounding circumstances, conclusions on the mechanism of death were drawn.ResultsIn eighty-six percent (86%), boluses of meat and sausage or meat-like chunks were observed. Of the forty-nine victims, 22 (42%) had elevated blood alcohol levels (>0.5‰) with blood alcohol concentration (BAC) levels of >0.73‰ to <3.99‰. Of the nonalcoholized decedents, 63% had neurological disorders and 11% had preexisting cardiac conditions.ConclusionsDetecting potential bolus events upon autopsy and the resulting mechanism of nonnatural deaths are of great importance. Therefore, the medical history, resuscitation protocol, and detailed description of the scene of death are essential. Upon autopsy, the type and position as well as size and weight of the bolus and dental status of the victims should be documented in a standardized manner. Additional toxicological investigations are necessary.