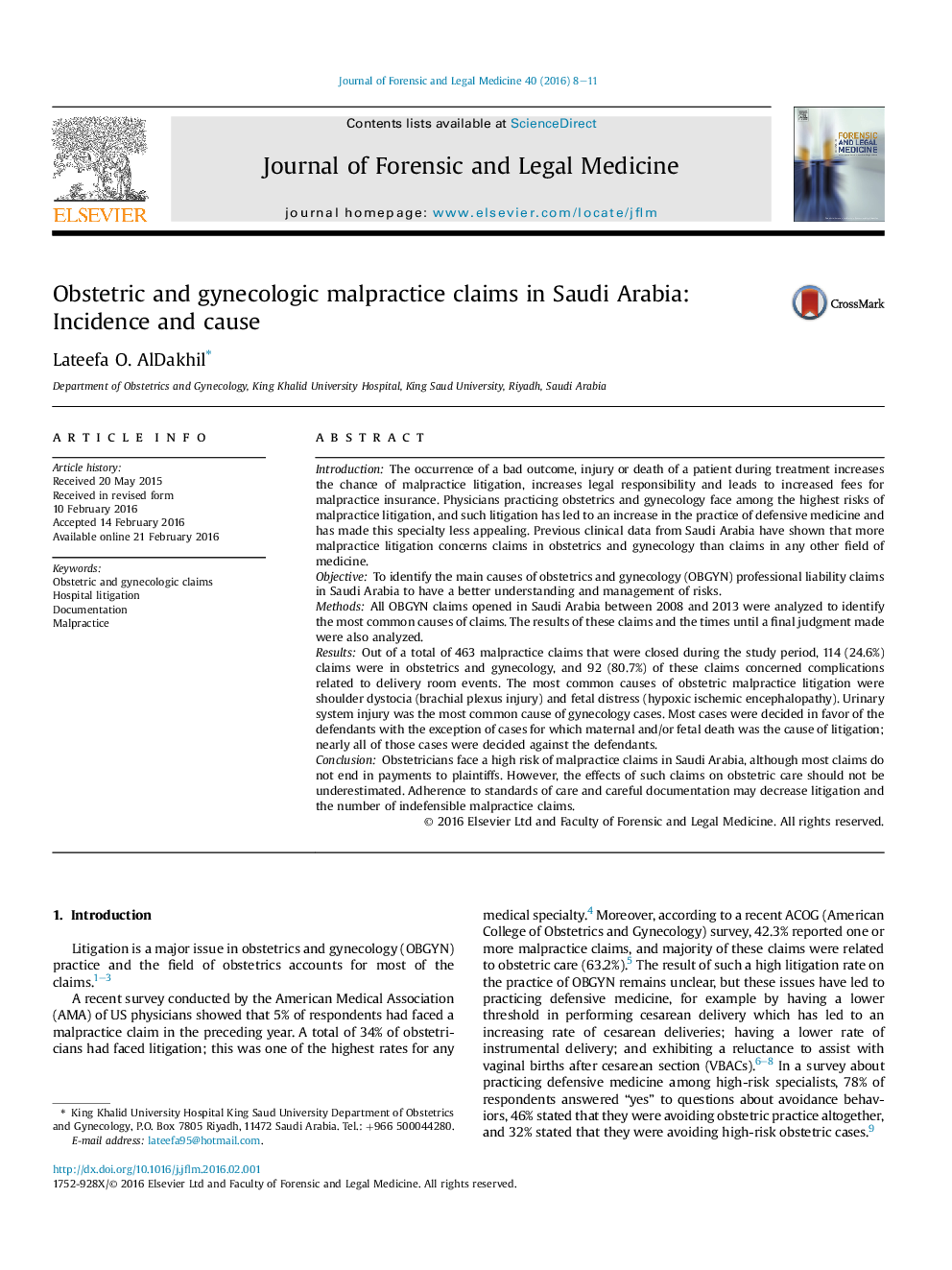 • Obstetrics & Gynecology malpractice claims in Saudi Arabia were analyzed.
• We found that the number of claims are increasing over the study period.
• The majority of the claims occur due to events that happened in the delivery room.
• Majority of these claims closed in the favor of the defendant.

IntroductionThe occurrence of a bad outcome, injury or death of a patient during treatment increases the chance of malpractice litigation, increases legal responsibility and leads to increased fees for malpractice insurance. Physicians practicing obstetrics and gynecology face among the highest risks of malpractice litigation, and such litigation has led to an increase in the practice of defensive medicine and has made this specialty less appealing. Previous clinical data from Saudi Arabia have shown that more malpractice litigation concerns claims in obstetrics and gynecology than claims in any other field of medicine.ObjectiveTo identify the main causes of obstetrics and gynecology (OBGYN) professional liability claims in Saudi Arabia to have a better understanding and management of risks.MethodsAll OBGYN claims opened in Saudi Arabia between 2008 and 2013 were analyzed to identify the most common causes of claims. The results of these claims and the times until a final judgment made were also analyzed.ResultsOut of a total of 463 malpractice claims that were closed during the study period, 114 (24.6%) claims were in obstetrics and gynecology, and 92 (80.7%) of these claims concerned complications related to delivery room events. The most common causes of obstetric malpractice litigation were shoulder dystocia (brachial plexus injury) and fetal distress (hypoxic ischemic encephalopathy). Urinary system injury was the most common cause of gynecology cases. Most cases were decided in favor of the defendants with the exception of cases for which maternal and/or fetal death was the cause of litigation; nearly all of those cases were decided against the defendants.ConclusionObstetricians face a high risk of malpractice claims in Saudi Arabia, although most claims do not end in payments to plaintiffs. However, the effects of such claims on obstetric care should not be underestimated. Adherence to standards of care and careful documentation may decrease litigation and the number of indefensible malpractice claims.