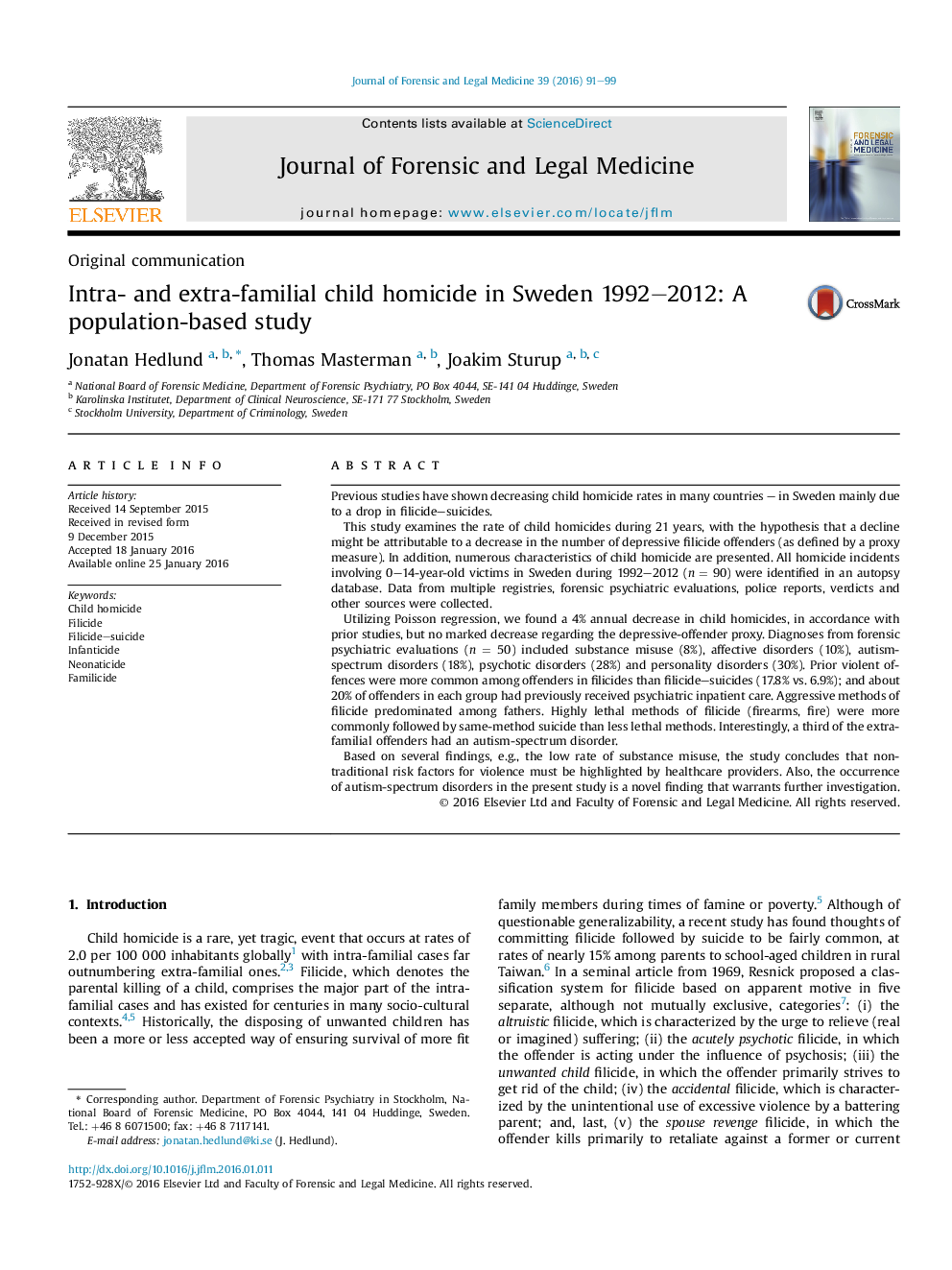 • Substance misuse was found to be uncommon (8%) among child homicide offenders.
• Eighteen percent of offenders were diagnosed with an autism-spectrum disorder.
• Some 20% of offenders had previously received psychiatric inpatient care.
• Prior violent convictions were more common in filicides than filicide–suicides.
• The child homicide rate has declined by 4% annually from 1992 to 2012.

Previous studies have shown decreasing child homicide rates in many countries – in Sweden mainly due to a drop in filicide–suicides.This study examines the rate of child homicides during 21 years, with the hypothesis that a decline might be attributable to a decrease in the number of depressive filicide offenders (as defined by a proxy measure). In addition, numerous characteristics of child homicide are presented. All homicide incidents involving 0–14-year-old victims in Sweden during 1992–2012 (n = 90) were identified in an autopsy database. Data from multiple registries, forensic psychiatric evaluations, police reports, verdicts and other sources were collected.Utilizing Poisson regression, we found a 4% annual decrease in child homicides, in accordance with prior studies, but no marked decrease regarding the depressive-offender proxy. Diagnoses from forensic psychiatric evaluations (n = 50) included substance misuse (8%), affective disorders (10%), autism-spectrum disorders (18%), psychotic disorders (28%) and personality disorders (30%). Prior violent offences were more common among offenders in filicides than filicide–suicides (17.8% vs. 6.9%); and about 20% of offenders in each group had previously received psychiatric inpatient care. Aggressive methods of filicide predominated among fathers. Highly lethal methods of filicide (firearms, fire) were more commonly followed by same-method suicide than less lethal methods. Interestingly, a third of the extra-familial offenders had an autism-spectrum disorder.Based on several findings, e.g., the low rate of substance misuse, the study concludes that non-traditional risk factors for violence must be highlighted by healthcare providers. Also, the occurrence of autism-spectrum disorders in the present study is a novel finding that warrants further investigation.