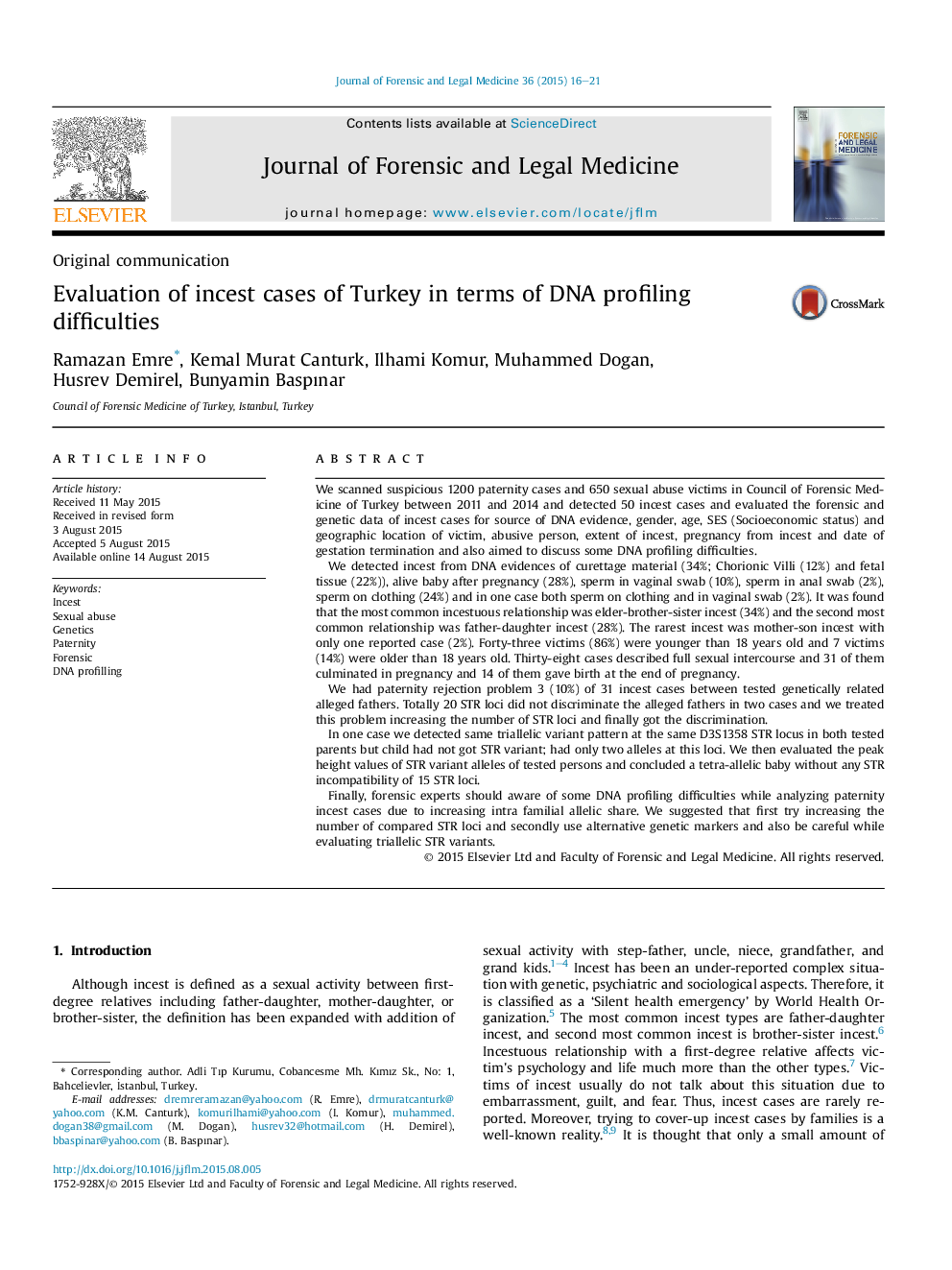 • Aware some DNA profiling difficulties while solving incest paternity cases.
• There is no consensus about the timing of curettage for fetal DNA detection.
• When solving of incest cases the multidisciplinary approach is very important.

We scanned suspicious 1200 paternity cases and 650 sexual abuse victims in Council of Forensic Medicine of Turkey between 2011 and 2014 and detected 50 incest cases and evaluated the forensic and genetic data of incest cases for source of DNA evidence, gender, age, SES (Socioeconomic status) and geographic location of victim, abusive person, extent of incest, pregnancy from incest and date of gestation termination and also aimed to discuss some DNA profiling difficulties.We detected incest from DNA evidences of curettage material (34%; Chorionic Villi (12%) and fetal tissue (22%)), alive baby after pregnancy (28%), sperm in vaginal swab (10%), sperm in anal swab (2%), sperm on clothing (24%) and in one case both sperm on clothing and in vaginal swab (2%). It was found that the most common incestuous relationship was elder-brother-sister incest (34%) and the second most common relationship was father-daughter incest (28%). The rarest incest was mother-son incest with only one reported case (2%). Forty-three victims (86%) were younger than 18 years old and 7 victims (14%) were older than 18 years old. Thirty-eight cases described full sexual intercourse and 31 of them culminated in pregnancy and 14 of them gave birth at the end of pregnancy.We had paternity rejection problem 3 (10%) of 31 incest cases between tested genetically related alleged fathers. Totally 20 STR loci did not discriminate the alleged fathers in two cases and we treated this problem increasing the number of STR loci and finally got the discrimination.In one case we detected same triallelic variant pattern at the same D3S1358 STR locus in both tested parents but child had not got STR variant; had only two alleles at this loci. We then evaluated the peak height values of STR variant alleles of tested persons and concluded a tetra-allelic baby without any STR incompatibility of 15 STR loci.Finally, forensic experts should aware of some DNA profiling difficulties while analyzing paternity incest cases due to increasing intra familial allelic share. We suggested that first try increasing the number of compared STR loci and secondly use alternative genetic markers and also be careful while evaluating triallelic STR variants.